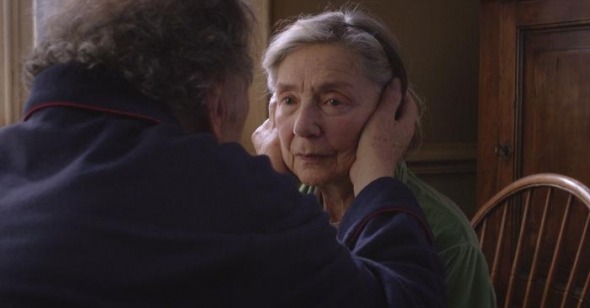 Be Afraid
By Michael Koresky

By now, we should all know that Michael Haneke wants to punish us. Whether pondering national racial legacies (Cach√©), media saturation (Benny‚Äôs Video), the blood sport of contemporary movies (Funny Games), the apocalypse (Time of the Wolf), or the seeds of fascism (The White Ribbon), the Austrian cinematic taskmaster engages in narratives and aesthetics that seek to shock or discomfit the viewer. He often accomplishes this with an astringency of technique, keeping much of the violence off-screen, shooting in extended, maddening long takes, and denying the audience‚Äôs pleasure. It‚Äôs no surprise that, to these eyes, his least chastising film is also his best: 2000‚Äôs Code Unknown, which both predicts and puts to shame the coming decade‚Äôs worth of tales of urban disconnection. Code Unknown keeps calling attention to itself as a movie, made clear in its thread featuring Juliette Binoche as an actress. The circumscribed aesthetic of the cheap thriller film-within-the-film that Binoche is shooting‚ÄĒmade clear from the shot-reverse shot editing and close-ups antithetical to the look of the rest of the film, shot mostly in single takes‚ÄĒsignals that we‚Äôre somehow outside of Haneke‚Äôs world, even though we‚Äôre actually buried deep within its layers. With Code Unknown, Haneke implies that such genre films contain little truth in a world so out of control. Yet as Funny Games and even his latest film, Amour, prove, Haneke is a genre filmmaker at heart, no matter how hard he might wish to deny it.

Air of sober intimacy notwithstanding, Amour, which won the Palme d‚Äôor at this year‚Äôs Cannes Film Festival (Haneke‚Äôs second such honor in only three years), is a horror film. Following the devastating final months experienced by a dying woman and more specifically the loving husband who has taken it upon himself to care for her, it is meant to appall and terrorize, to evoke unpleasant sensations, to leave its audience suspended in dread, and ultimately, as is the primal goal of horror, to elicit catharsis. Haneke‚Äôs methods are clear from the opening: after a long, quiet stretch of simple credits, followed by an extended black screen as silent as the grave, the film smash-cuts into its first scene with a terrifying jolt. An apartment door is thrust open from the outside with a slam loud enough to make the audience members jump from their seats. Emergency medical workers cover their noses in disgust, as clearly the stately place is permeated by something foul. As the camera roves around the flat from room to room, implicitly taking on the perspective of one of the outsiders, we feel a sense of growing fear at what it might reveal as it turns every corner. Finally Haneke offers his first shock, and it‚Äôs a doozy: a corpse, shriveled to a brown Mrs. Bates mottle, lying peacefully if horribly on a bed strewn with flowers, its face hollow, its hands desiccated into claws. Quick cut to black, as the title Amour fills the screen like an attack dog let loose.

In this opening, Amour, which is a stridently reserved affair in compositional terms, reveals itself as Haneke‚Äôs latest bit of confrontational cinema. The exquisite geometric precision of Haneke and DP Darius Khondji‚Äôs cinematography, with its mostly static and occasional steady following shots, ultimately lends itself well to a Polanski-like claustrophobia. Except for a short sequence following the opening title card, we are never allowed outside of the main characters‚Äô apartment building. Those shots‚ÄĒat a concert hall and on a bus ride home‚ÄĒhaunt the rest of the film for the relative freedom they intimated. Our first glimpses of husband and wife Georges and Ann are as they wait patiently in the audience before a piano recital. The unmoving camera is pointed out at the crowd as they filter in and take their seats, as the lights slowly dim. The elderly couple we will come to know intimately are sitting on the left side of the frame, but the camera is at such a distance, without privileging anyone, that we have had to scan the entire theater to find them. In fact, if one did not recognize the weathered faces of actors Jean-Louis Trintignant and Emmanuelle Riva from decades of movie roles then one would not be able to locate an emotional center in the room at all. As he did in the last shot of Cach√©, Haneke is inviting us to become active viewers; as if the address wasn‚Äôt clear enough, there‚Äôs even an announcement telling everyone to please turn off their cell phones. At the same time the scene intimates that Georges and Ann are just two individuals in a crowd of people, all with their own lives and problems, as well as situates them in a particular rarefied cultural environment‚ÄĒone that Haneke has already proven to have a marked ambivalence about.

Haneke‚Äôs former pitiless portraits of bourgeois complacency haunt Amour. Though it‚Äôs already been crowned as his most humane film (which forgets the yearning for human connection that runs through Code Unknown), Amour is also intentionally cold to the touch, and that is largely due to its setting. Georges and Ann‚Äôs spacious apartment contains the hallmarks of the elderly couple‚Äôs life together (books, CDs, a baby grand piano), but if it all feels more art-directed than lived-in it‚Äôs because Haneke seems to be peering at them through a telescope. The air of intellectual European refinement around Georges and former piano teacher Ann feels like an unnecessary distancing device‚ÄĒand the fact that they‚Äôre given the same generic Haneke names (nearly all his films‚Äô couples are named Georges and Ann) should set off some kind of alarm bell. This is not to insinuate that Haneke betrays any insincerity towards his characters, but one wonders how he might have conceived and shot a film about a lowly working-class couple dealing with encroaching death in a tiny one-room apartment. The trappings of upper-middle-class comfortability are simply too present in the mise-en-sc√®ne to be ignored.

Breaking through Haneke‚Äôs pointed sculpted perfection, however, are Trintignant and Riva. The critical acclaim that has met and will continue to be showered upon Amour should be owed largely to their remarkable performances; their compassion seems to imbue the entire film. The way they move within Haneke‚Äôs steady, static frames is what give the film its humanity. An early, before-the-fall scene set in the kitchen is remarkably lovely for the way it simply records the way they respond and engage in routine, the familiarity with which they make food, use the sink, and their comfortable body language in each other‚Äôs company. We hardly know these two, yet it is rattling when Ann‚Äôs face suddenly goes slack at the kitchen table. Unresponsive, momentarily nearly catatonic, Ann seems to disappear from us even as we look at her. We take on Georges‚Äôs perspective; we know we‚Äôre watching the first step towards death.

Amour is from this point on devoted to the incremental disintegration of Ann, and the increasing helplessness experienced by Georges as he tries to hang on to her. After a brief ellipsis in which he has taken her to the hospital, Ann returns in a wheelchair, debilitated by a stroke related to an obstruction in the carotid artery, with one arm paralyzed (a particularly cruel fate for a piano teacher, though the sadness of this fact is never spoken of, only reflective in Riva‚Äôs eyes). Situated back in her home, Ann forces a difficult promise out of Georges‚ÄĒ‚ÄúPlease never take me back to the hospital‚ÄĚ‚ÄĒsetting in motion the slouch towards pain and decay that comprises the remainder of the narrative. Though the film is fashioned as an irrevocable descent into negation, Trintignant and Riva make it feel richly alive. There‚Äôs a resounding impact to the sheer physicality of what we‚Äôre seeing, the heaviness of Georges‚Äôs weary body as he helps Ann in and out of her wheelchair, the delicate way that Riva uses one hand to put on her glasses in order to read in bed or flip through a photo album. When Haneke is simply recording frail human movement, Amour is incandescent in its observation. When Ann‚Äôs body becomes increasingly immobile, the camera gaze grows more insistent, intrusive, less penetrating, not sharing in her grief and pain but staring at it as though a spectacle, especially evident in a scene in which Riva‚Äôs naked, wheelchair-bound body is showered before a static camera. This allows the viewer not to empathize so much as feel as though we‚Äôre being shown something important, summoning the suspicion that Haneke is again hectoring us for our edification (he remade his own Funny Games for the U.S. because he said he wanted it to be a ‚Äúslap in the face‚ÄĚ for American viewers).

The punishing intimacy is for our eyes only, certainly not for Eva, Georges and Ann‚Äôs daughter, played by Isabelle Huppert. Semi-estranged, evidently due to both physical and emotional distance, Eva is the film‚Äôs single major supporting character, and her sidelining is part of the point. As Ann gets sicker, Georges withdraws from the world, even from Eva, whose phone calls he stops returning and whose few-and-far-between visits are treated with increasing indifference. With the source of Eva‚Äôs withered relationship with Georges and Ann left intentionally vague, Huppert is left a bit adrift, but she resourcefully sketches a grown woman unable to untether herself from her mother and father but who perhaps hasn‚Äôt realized how frayed that tether has become. She‚Äôs less insensitive offspring like those in Make Way for Tomorrow or Tokyo Story than a woman unable to fully emotionally comprehend her family‚Äôs situation. Haneke is not unfair to her however; to him this obliviousness is natural. Eva is distraught, but the amour of the film‚Äôs title is definitively not that between child and parent; rather it is an all-consuming, hermetic, specifically romantic love, one that exists and is only understandable in the space between two people who‚Äôve spent their adult lives together.

Onscreen, this love hits hard, largely by virtue of the generous, naturalistic way Trintignant and Riva inhabit their roles. They‚Äôre the ones who make this nightmare worth soldiering through, just as it‚Äôs the people we adore who make this life worth living, not the omniscient figure who pulls the strings. Haneke‚Äôs grip on his characters is so tight, his aesthetic so determined and claustrophobic, and his art-shock tactics so pronounced that when he occasionally indulges in symbolism it comes across as incongruous. A late-film bit of business featuring Trintignant catching and freeing a pigeon flying loose in the apartment has been criticized for its heavy-handedness, but the problem with this expertly directed scene has more to do with whether such a gesture feels tonally earned after so much horror. It‚Äôs like The Texas Chainsaw Massacre climaxing with a forced spiritual epiphany.