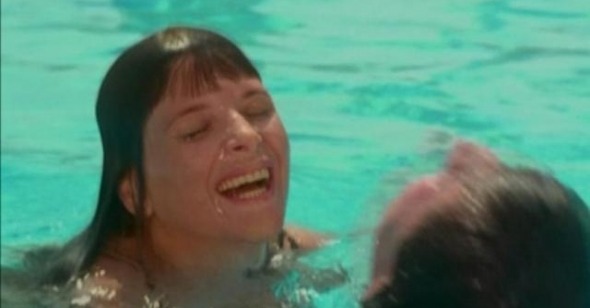 The cover art for the home video release of Michael Haneke’s Code Unknown is an eye-grabber: Juliette Binoche, head above water in a swimming pool, letting out a scream. Certain to draw in both the discerning and the dilettante, the cover is also something of a fraud. Code Unknown not only plays out nothing like the cover art—it’s the antithesis of it. That catchy picture is the work of either a really cynical distributor or a really prankish one.

This is not to say that the movie doesn’t contain the shot depicted on the box. There is, in fact, a scene in Code Unknown in which Juliette Binoche swims in a pool, looks at something offscreen, and screams. And it does, in fact, deliver a shock—though it’s not the same one that sets off Binoche. Some moments before this scream occurs, the camera lingers on Binoche for a few mere seconds, then the camera cuts to a man in the pool with her. That edit has a quietly seismic effect. Code Unknown up to that point had largely unfolded in discrete scenes all filmed in long single takes. Cutting within the scene, Haneke reverts to conventional film grammar—and, in the process, calls attention to the scene’s artifice.

It doesn’t take long to realize that we aren’t watching a scene in Michael Haneke’s Code Unknown but from something tentatively called “The Collector,” a movie within Haneke’s movie. In Code Unknown, Binoche plays an actress named Anne; in “The Collector,” Anne plays a woman in distress in what seems like a thoroughly generic thriller. The wonder of the pool scene is how Haneke takes that most mundane of tropes—the shot-reverse shot—and makes it strange, even revelatory. Juxtaposing it against a succession of Bazinian long takes, Haneke’s simple cut becomes a formalist critique of cinema.

But interrogating his medium is nothing new for the Austrian director. The movie that made his name, 1997’s Funny Games, was a sadistic meta-thriller in which the killers repeatedly addressed the audience and kept identifying themselves after pop culture icons. The point was hammered home—we, the audience, are to blame for the degeneracy that pervades our cultural life. However much I admired its moral seriousness and formal audacity, Funny Games struck me as the work of a presumptuous lecturer who couldn’t fathom that the movie’s audience might actually be as smart and ethical as its high-minded maker.

Code Unknown finds Haneke in no less of a pontificating mood, but it’s a kinder, gentler jeremiad. Gone is the relentless audience pummeling; in its place is a worldview that borders on compassionate. The title’s meaning becomes clear in its overture, a scene set in a school for deaf children. A girl standing against a bare white wall acts out a scene in front of her class. They try to guess what she’s trying to convey: “Alone?” “Hiding in place?” “Gangster?” “Bad conscience?” “Sad? “Imprisoned?” Cut to a title card: “Code Unknown.” It is a movie about the impossibility of communication in a society riven by differences, be it class, age, race, or nationality. In its invocation of illegal immigrants, racial tensions, Kosovo, and even the Taliban (before they became a household word), Code Unknown posits Haneke as nothing less than the conscience of a troubled Europe.

The movie opens with an audacious shot: a nine-minute tracking shot along a busy Paris street that brings together the main characters in the same space for the first and final time. A young man (Alexandre Hamidi) throws garbage at a panhandling Kosovar (Luminita Gheorghiu); a black man (Ona Lu Yenke) confronts the offender, arousing the attention of the police; a woman (Binoche) comes to the aid of the young man, who is actually her brother-in-law; meanwhile, the black man is taken away by the cops, as is the panhandler. From there, the movie branches off into seemingly disconnected fragments. But as the picture unfolds, each new scene fills in a piece of the puzzle. By the end, Haneke’s ingenious narrative strategy becomes clear, as all the disparate arcs complete their trajectory.

Starting his movie off with the banality of cruelty (a young man throws garbage at a poor woman), Haneke immediately follows with an act of activism (black man confronts young man). But the results are decidedly mixed. The black man is taken to jail, his immigrant family disgraced; the panhandler ends up being deported after attracting unwanted attention. There are no pure acts and simple answers, it seems. Or are there? In another scene, Anne irons clothes while watching TV. In the background she hears a child’s screams. Alarmed, she turns down the volume. The screams keep going then stop. She pauses, wonders what to do, then uncertainly turns the volume back up. Later, a more explicit cry for help will come—and inaction will again be the response. The consequences of her choices will eventually come back to haunt her.

But it is also a world not without hope. The first sign of thawing in the chilly Haneke comes in the subtitle: “Incomplete Tales of Several Journeys.” While the respective arcs of the main characters actually complete their trajectories, the word “incomplete” raises the possibility of better days. As with Caché and its closing shot of an unlikely friendship, that possibility is embodied in children. A couple of times during the movie, Haneke cuts to a giddy ensemble of deaf children playing drums. One of the final images is positively utopian: a Benetton-ad ensemble of children banging happily away at their drums, staying on the beat despite being deaf—the code found.

Which begs the question: where does the artist fit in all this? The cut in the pool scene offers a clue—but only a clue. On the one hand, it reminds us of the fundamental dishonesty of movies. There is a director behind the camera who manipulates what you see, Haneke is telling us. On the other hand, Haneke seems to offer his movie as a formal repudiation of conventional cinema with its rigorous mise-en-scène and aversion to cutting. I am different, he seems to suggest.

Is that cut Haneke’s implicit statement of exceptionalism? After Caché, it certainly seems likely. That movie left many people asking the question, “Who filmed those scenes?” (surveillance videos that addled the conscience of its liberal bourgeois protagonist). The answer was, obviously, Haneke. It was as explicit a proclamation of the artist’s role as the conscience of his society as anyone has made in movies. Code Unknown finds Haneke working his way to that conclusion.

What mitigates the hubris of the sentiment is the admission of ambiguity in his portrait of the artist. Most obviously, it comes in the person of Georges (Thierry Neuvic), Anne’s boyfriend, who is a war photojournalist. Two montages introduce his work, one of his photos from the Balkans, the other his side project of photos taken of subway passengers surreptitiously. Does good art excuse unethical means? Can good intentions lead to exploitative images? When Haneke makes that unexpected edit in the pool scene, he isn’t just calling attention to the manipulations of “The Collector,” but to his own movie as well. His mise-en-scène is a good faith effort to convey truth via image, but the cut is his way of reminding us of the controlling hand behind movies. In Code Unknown, Haneke reaches for an important lesson in critical viewing—not necessarily that movies lie, but that they can lie. All the honest artist can do is explicate his worldview, point the camera, and let the audience do the rest. 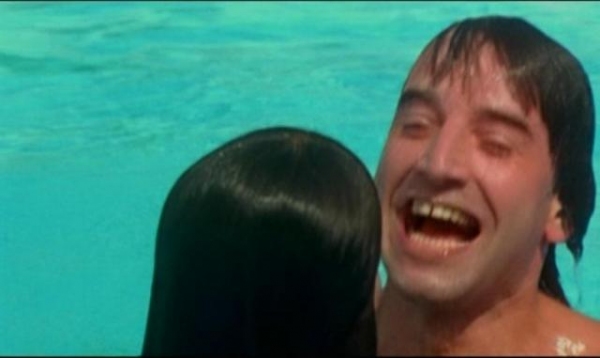