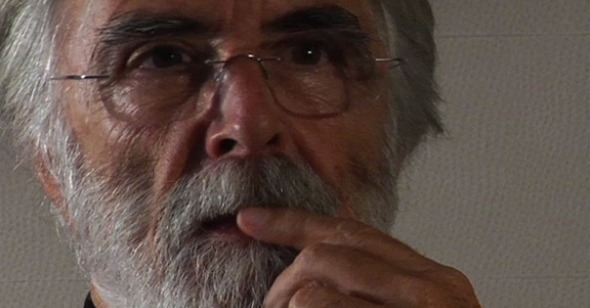 Quality Control:
An Interview with Michael Haneke
by Damon Smith

A shorter video version of this discussion with director Michael Haneke‚Äîconducted in New York upon the premiere of his Palme d‚Äôor winner The White Ribbon at the 2009 New York Film Festival‚Äîis available as a Reverse Shot Direct Address. Click here to view it.

Reverse Shot: Perhaps for the first time, you‚Äôre working with notions of community in The White Ribbon.

RS: Well, giving us a portrait of a large group of people as opposed to focusing on a single family unit, emphasized in your previous work.

Haneke: I think that in my earlier films, like 71 Fragments of a Chronology of Chance and Code Unknown, I presented cross-sections of society, so this isn‚Äôt quite uncharted territory for me.

RS: Would you say that you were more interested in exploring private questions, though, as opposed to the larger historical and political problems that beset society?

Haneke: I think that any director, any author in fact, is more interested in the existential questions. The political component is secondary. Whether you‚Äôre making a film or writing a novel, you‚Äôre dealing less with the political and much more with the personal questions, personal dramas. The political aspects are supplementary and an additional value that you should hope will arise from the personal. But it‚Äôs less primordial. One doesn‚Äôt exclude the other, but I think that, artistically, the personal drama is more interesting.

RS: In this instance, the terror and violence that spring up in this village seem to come from a more organic place. In the past, many times that violence has come as the result of an intrusion‚Äîa housebreaker or a murder or the videotapes in the case of Cach√©‚Äîso that‚Äôs why I was asking about notions of community and if you were attempting to explore ideas about how violence can organically rise from a social situation.

Haneke: I‚Äôm not sure I agree with that classification. I think that in every film I‚Äôm dealing with social elements. The question is whether you‚Äôre concentrating more precisely on individuals or on a family or on a broader spectrum of society. Regardless of that, you‚Äôre still dealing with the same tensions. In Code Unknown, for instance, it‚Äôs true that I‚Äôm dealing with different private issues, but there‚Äôs a broad social context in which those private issues take place.

RS: Let‚Äôs talk specifically about the problem of evil you‚Äôre working with here and how that played a role in the story that you gave shape to, and also what we see onscreen happening between these characters.

Haneke: I don‚Äôt understand the question.

RS: Did you want to say something about the nature of evil?

Haneke: I‚Äôm not a philosopher. Drama always deals with the conflict between good and evil, and this film is no exception to that. I really don‚Äôt know how to answer that question.

RS: Let‚Äôs talk about absolutes then, absolute ideas and ideals. This is a community in which ideals are being transmitted from parents and pastors and figures of authority to the younger generation. Isn‚Äôt that somehow related to the way that violence erupts in this village?

Haneke: I think that whenever an idea is elevated into the realm of ideology, there is a danger. There are many ideas that are beautiful: Communism is a lovely idea in itself. But communism led to the death of millions of people. It cost many people their lives. The Gospels are a lovely message. But there again, the Crusades led to the death of millions. The question that my film deals with always is how you condition people so that they are ready to follow an ideology. You find the conditions are always identical regardless of the time and place. There is a deep unrest, a deep social unrest, a sense of helplessness and humiliation, and with those conditions, people are already desperate to grab at any straw to save themselves. Usually, those straws are ideological. What the film [addresses] is how the form of social conditioning leads us to be open to grasp at those ideologies.

RS: It also raises the question of innocence, which is an important theme here, both in the sense of the pastor‚Äôs relationship with his children and the white ribbon that he binds them with to remind them of their innocence when they‚Äôve done something to displease him. It even extends even to the shots of landscape. The snow, the cold, the northern climes‚Äîall of these things seem connected. So it raises the question of what is innocence, I suppose, and whether something like innocence exists.

Haneke: [Long pause] Difficult question. I don‚Äôt believe, when it comes to children, that there‚Äôs such a thing as innocence, or that children are more innocent than adults. They may be naive, they may know less than adults, but innocent? I‚Äôm not so sure. All you have to do is look at kids playing in a sandbox to question that notion. Innocence only exists in reference or contrast to knowledge. The pastor used the white ribbon as a pedagogical method, an educational tool for his children. I‚Äôm not sure that‚Äôs an image of innocence so much as a symbol of purity. And at the same time, that white ribbon is also an awful means of oppression.

RS: It seems to me that you give an additional scrutiny in this film‚Äîand perhaps I‚Äôm misremembering the others‚Äîto faces, physiognomies, the landscape and territory of faces, particularly in the church, and in the children‚Äôs choir. What pushed you in that direction?

Haneke: One of the references we had in preparing the film were black-and-white photographs from that period. So when we were looking to cast especially the extras in the film, then yes, we were looking at faces that appeared to be old-fashioned, that would be in the historical and social context we were presenting, such as in the choir. Interestingly, we could not find, among German farmers of today, faces that corresponded to how things were. I think living conditions aren‚Äôt as difficult [now], so their faces haven‚Äôt been as marked by the wind and the weather as they were in the past. In fact, we had to go to Romania to find extras to play the parts of farmers in the church and at the harvest celebration. We brought them in by bus‚Äîthey traveled 2,000 kilometers to shoot on set. It was similar for the children. We were looking for children who were not only talented actors, but whose faces corresponded to the kinds of images we‚Äôd seen and who would be believable in those roles. That was one of the reasons why we had to meet 7,000 children to cast the fifteen roles that we had. It was a lot of work, but I think it paid off.

RS: Do you consider yourself a moral filmmaker?

Haneke: I‚Äôm not preoccupied with categorizing myself. I leave that task up to critics and journalists.

RS: Then let me ask you this: I think your position as a filmmaker is that there‚Äôs an ethics to the image. And I wonder if, on the other side of that, you also feel there is an ethics to being a spectator.

Haneke: I think that film is par excellence the medium of manipulation for spectators, so as a result, it is your obligation as a filmmaker to use that power responsibly. It‚Äôs necessary to take the spectator as seriously as you take yourself. Of course, mainstream cinema doesn‚Äôt do that. Mainstream cinema robs the spectator of the responsibility while fulfilling the desires that they purportedly have. All they‚Äôre really doing is going into their wallets and taking out money. If you see cinema as an art form‚Äîwhich one could argue about, though I definitely see it as an art form‚Äîthen it‚Äôs necessary to treat the spectator with the same respect that you treat yourself, to take him as seriously as you take yourself. When I‚Äôm watching a film that‚Äôs offering me answers, I get bored, because I know such answers don‚Äôt exist, that simple explanations don‚Äôt exist in our world. It‚Äôs important, then, for films to call on the imagination of the spectator, to draw them into the project, to have them finish your film for you.

RS: Are you familiar at all with the tradition of pessimism that runs from the Cynics to Schopenhauer?

Haneke: I know that I‚Äôm often classified as a pessimist. I read the works of Schopenhauer when I was majoring in philosophy, but it‚Äôs not really how I see myself. First of all, the question is how you define a pessimist. How do I define myself? I see myself much more as a realist who‚Äôs trying to observe society accurately and penetratingly. If you‚Äôre presenting dramas, then you‚Äôre necessarily going to deal with conflict, not with situations that are idyllic. So it‚Äôs true that my films aren‚Äôt as amusing, as light and funny as is usual in mainstream cinema, but it‚Äôs my ambition to provide a perspective as penetrating as possible, as realistic as possible.

RS: You mentioned manipulation, and the manipulation of images in particular. In your films television, and the actual television set, often play an ominous role‚Äîit has a presence in so many of your films, from The Seventh Continent on‚Äîand I‚Äôm curious how your own background in television gave shape to your approach when you began making feature films.

Haneke: I think that television determined my later work very little, in fact. At the time I was making television films, it was possible to do a different kind of work from mainstream television and the kind you mostly see now. It was possible to do work that was more or less serious. The last four or five television films I did were literary adaptations. That was the only possibility of using that medium seriously, and certainly the work in television allowed me to develop my means as a filmmaker. The only way you can learn to become a filmmaker is by making films, and that was what it did. It helped me learn my craft. In the same way, I also worked in theater for twenty years. So both of those aspects helped me exercise my skills and learn my craft. But I think that, ideologically, my television work has little that‚Äôs illuminating for my work in cinema.

RS: Purely on a formal level, your films have such precision and craftsmanship. How did you arrive at that approach as the best for you to tell the stories you needed to tell and express yourself in the way you wanted, through imagery?

Haneke: I think that this mastery, this practice comes from the opportunity I‚Äôve had over all the years to hone my skills and become a better craftsman. I don‚Äôt consider myself an artist, but rather a craftsman. And as a craftsman, it‚Äôs my responsibility to try to hone my skills, to try to be able to make better and more precise films. Interestingly, in filmmaking, any dilettante can make a film and claim to be a director. Whereas if a musician starts playing the piano, very quickly you‚Äôd realize if he doesn‚Äôt have the technical mastery necessary to do so. Anyone can say they‚Äôre a director, and the results are very visible onscreen. I think that over the years I‚Äôve spent making films, I‚Äôve had the opportunity to learn my craft better, and perhaps because of my sense of responsibility, I‚Äôm constantly striving to make better films.