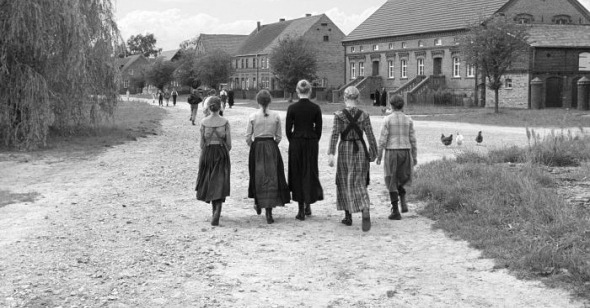 Discipline and Punish
By Eric Hynes

As is the case with several films in this year‚Äôs New York Film Festival, Michael Haneke‚Äôs The White Ribbon exemplifies the pleasures and drawbacks of auteurism. On one hand, familiarity with Haneke‚Äôs (or Denis‚Äôs or Dumont‚Äôs or Breillat‚Äôs or Resnais‚Äôs or Rivette‚Äôs) filmography deepens our understanding of his latest film. We can see patterns, hear rhymes and echoes, obsess over variations, while monitoring the path of a larger career arc‚ÄĒthe director‚Äôs progress and maturation. On the other hand, we‚Äôre all too familiar with what‚Äôs in store. Viewed in relation to previous work, new films can seem not so new. They are too familiar. Which side gets the upper hand largely depends on one‚Äôs appreciation or affection for the filmmaker (and filmmaking project) in question. Even indefatigable auteurists, for whom pattern itself‚ÄĒrather than the meaning of the revisited gesture or theme‚ÄĒis sacrosanct, can play favorites. At this point in his career, especially after his disastrous stunt remake of his own Funny Games, Haneke has as many detractors as he has supporters, and The White Ribbon will repel or reward them accordingly. And as it happens, each response will be justified.

Set in a north German hamlet in 1913, The White Ribbon is pointedly historical and realistic (or miserabilistic) yet in essence a ghost story. Its high-contrast black-and-white evokes the past, but also classic, resourceful spook films, and its clinical crispness, capturing costumes and settings of exacting periodicity, could only be the product of ultramodern, high-definition digital cinematography. Haneke‚Äôs high seriousness often overshadows such formal playfulness. Like Brecht, his attacks on the fourth wall have moral, implicating purpose, but they are also confessions of artifice. Even Haneke at his most haranguing implicitly cops to his own conceits. Seconds into The White Ribbon, with opening credits still on the mind and before light can fill the black frame, the narrator‚Äôs first words are, ‚ÄúI don‚Äôt know if the story I‚Äôm about to tell is entirely true.‚ÄĚ As the narrator continues, the camera reveals a pastoral landscape, a doctor on a horse, and then a mysterious accident that sets events in motion. It‚Äôs a tale, perhaps something of a tall one, about horrors unseen but all too explicable. First came a skin-deep remake of Funny Games, and now Haneke revisits Cach√© in different garb.

Tripped by a virtually invisible cord, the doctor (Rainer Bock) is badly injured. Foul play is suspected but never confirmed. Next a laborer falls through a rotted floorboard and she‚Äôs crushed to death by the gears of a machine. The eldest son (Sebastian Hulk) blames his dead mother‚Äôs employer, the Baron (Ulrich Tukor), and vengefully hacks away at the seasonal crop with a scythe. When his deed is discovered, he‚Äôs banished by his still grieving father. Meanwhile, the Baron‚Äôs young son (Fion Mutert) is found tied to a tree, beaten and violated. Three crimes in a small town over such a short span of time breeds suspicion and paranoia, and henceforth seems to poison every relationship and interaction. Crimes continue, and some are shown, but most are unseen and unresolved. Despite his genre play, Haneke doesn‚Äôt care about isolated crimes or mysteries. Personal guilt is (here literally) child‚Äôs play. The big culprit, as usual, is the monster called society.

For almost two-thirds of its running time, The White Ribbon is flat-out masterful. Haneke populates the screen with a large and fully plausible community, an obvious miniature of the world that nevertheless comes alive through the camera‚Äôs love of individuated bodies and faces. Action is secondary to reaction. Explication is secondary to implication. Characters move around the frame, with the camera following only when and as far as necessary. For a wrenching scene of corporal punishment, we watch a long, dreaded perp walk but remain behind a closed door, hearing the impact of the rod only faintly. Later a corpse is partly obstructed by a wall, the camera again fixed and distanced as the widower approaches and sits down. All but his aggrieved back disappear behind the wall. Eyes alight, faces present deepening wrinkles and folds, braided hair mesmerizes. Even as Haneke depicts a community spiraling into, as a character observes, ‚Äúapathy and brutality,‚ÄĚ the gorgeousness of the visual record seems restorative, or at least contrapuntal to the gathering malice. The images are like gulps of oxygen in a shuttered, rank room.

Over time, such scenes lose their internal power, as Haneke reveals the sins of his townspeople, making explicit what had been implicit and ramping up misery and abuse. Haneke feigns interest in the personal, but he‚Äôs really interested in the societal, and as his film spirals further and further away from momentous experience his characters lose their individuation, their mystery and opacity. They become exhibits, cautionary tales, representatives of Human Intolerance and Human Weakness. The large community allows him to cut from house to house, and from realist environment to realist environment, with searing thematic intent. A father, the town pastor (Burghart Klaussner), humiliates his son with a lecture on masturbation; cut to a man fucking a woman from behind. The doctor humiliates his lover and says he wishes she were dead; cut to a casket. The doctor sexually abuses his daughter; cut to the pastor verbally and violently abusing his daughter. These are cold-water, one-to-one, line-segment edits; montage for beginners. The beginners, of course, aren‚Äôt Haneke and editor Monika Willi, but us.

For the last third of the film, Haneke leans on the horn. Shots shorten, blunt words are spoken (‚ÄúYou disgust me . . . my God, why don‚Äôt you just die?‚ÄĚ), and drama morphs into point-to-point demonstration. Violence begets violence. A perverted community begets perverted children. Fascism starts in the home. No doubt there are truths here, but these are also story-killing truisms. The message is worthy, but needn‚Äôt be written so boldly, and from such a prescriptive remove. And overemphasis can have an oppositional effect. I found myself fighting against his conception of human nature, of his blanket condemnation of prewar German culture, of his overt equation of religion and violence and subjugation and self-loathing, even though, outside of The White Ribbon, I might share his opinion on these matters. That‚Äôs the paradox of Haneke‚Äôs films: he exposes human brutality through brutal technique. He depicts despotism by performing it. But this isn‚Äôt just a knowing paradox‚ÄĒit‚Äôs a failure of nerve and artistic faith. Haneke doesn‚Äôt trust me to catch his drift, so he makes his points progressively explicit. He doesn‚Äôt just plant seeds of violence, he has to show the roots. And he doesn‚Äôt just show the roots, he has to point to buds breaking the surface. A big tree of violence called the twentieth century is about to grow, and Haneke‚Äôs not about to let me feel anything less than browbeaten and queasy by it.

Why does an established, gifted artist, one whose authority and moral seriousness has been widely appreciated, still feel the need to telegraph his meaning? An already attentive and respectful audience is bullied about in order to bestir the back row. It would be unfair to say that The White Ribbon is entirely guilty of this, for it is at times delicate and subtle. But it‚Äôs exactly that capacity for subtlety that makes its unsubtleties hard to bear. Haneke is no art-for-art‚Äôs-sake aesthete, no self-obsessed nihilist. He makes films‚ÄĒgreat films, more often than not‚ÄĒthat mean something. He wrestles with society, with chains of violence and cruelty, with power, class, and self-deception. He‚Äôs what we used to call a serious artist, and we could use more of him. But the stakes are higher for serious artists; meaning it invites great responsibility. So when he errs, whether in total or just in part, he doesn‚Äôt err insignificantly.

During a domestic dispute between the Baron and his wife, wherein she exposes the charade of their marriage and boldly, if fearfully, declares her independence, word arrives that the Archduke Ferdinand has been shot, signaling the beginning of the Great War. The outside world comes crashing down on the hamlet, but let‚Äôs face it: Haneke got there first, planting hindsighted portents of incivility, ritual abuse, perverted justice, and bloodlust. The White Ribbon exposes sadism but makes no concessions to pleasure. It‚Äôs grand, audacious, and something to behold, but you also know, before it begins, exactly what it will say.