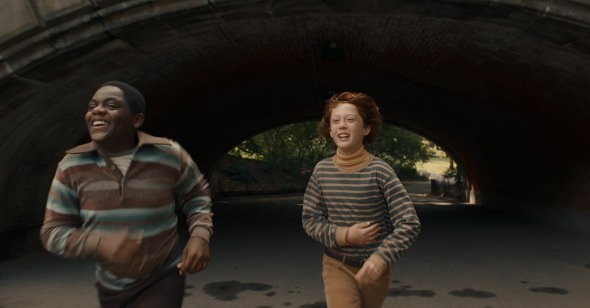 In James Gray’s Armageddon Time, an artistically inclined 11-year-old named Paul Graff (Banks Repeta) is reprimanded by his public-school homeroom teacher for copying a Wassily Kandinsky painting from memory. “Be original,” the adult has directed his class, and, for failing to do so, he berates the boy with obtuse authority, blind to the precocity evidenced by his student’s eidetic rendering. Later, Paul, now enrolled at an elite private school, will again be yanked back to reality, if more gently this time, by an officiously sweet art teacher as she leads a lesson on Paul Gauguin. While praising the expressiveness of his colorful drawing of a NASA rocket, she chides him for his dreamy inattention. “Do the assignment,” she whispers through a smile that radiates a patronizing warmth. The sometimes heavy-handed, sometimes soft-spoken, and often contradictory ways in which a class-stratified society nurtures and then stifles, curbs, and redirects the naive imagination is one of the major themes of this delicately painful and painfully honest film, a portrait of innocence shading into experience set among the shadows of an American past that could scarcely feel more present.

Gray, whose own background as a painter runs throughout his films, beginning with the pietà-like reunion of Tim Roth’s vacant hitman with Vanessa Redgrave’s dying mother in Little Odessa, has always cultivated a visually heightened and tragically ironic relationship to the imagination, especially as an outlet for the emotional frustrations engendered by class repression. Taking his cues from films like Visconti’s Le Notti bianche and, above all, Vertigo, he advances a notion of the imagination that’s always tied tightly to the semiconscious desires and unconscious delusions of characters yearning to transcend the social trappings that suffocate them. In The Lost City of Z, the explorer Percy Fawcett, while under hypnosis (like Scottie seeing the stables of the Mission San Juan Bautista when he kisses Judy), begins to perceive the jungle to which he longs to return in the very walls and men surrounding him; in reality he’s in a bunker in the Somme in 1918. Gray’s new film adopts a similar approach to render the escapist fantasies of his childhood self. In a scene straight out of Fellini’s Amarcord, Paul stares into the color burst of Kandinsky’s “Black Lines” and sees himself basking in the adulation of his classmates and teachers as a painting he has made of a favorite superhero is added to the Guggenheim’s permanent collection. On one level, this flight of fancy lifts the character out of the drab, poorly lit reality of his urban world into a gleaming, elevated sphere. On another, its projection of his narcissistic longing for the attainment of such a sphere reflects an imagination that has already internalized the elitist worldview that undergirds class prejudice.

Here, the urban world in question is New York City in the pivotal year of 1980. Set largely in Gray’s old neighborhood of Flushing, Queens, on the cusp of Ronald Reagan’s landslide victory over Jimmy Carter, the film opens as Paul is entering the sixth grade at PS 173. The loosely autobiographical story that ensues proceeds along two intersecting tracks. The first tells of the boy’s relationship with Jonathan Davis, or Johnny (Jaylin Webb), a vulnerable Black student who lives with his ailing grandmother and whom he befriends on the first day of school, while the second tells of his changing relationship with his middle-class, Russian-Jewish family, especially with his striving parents Irving (Jeremy Strong) and Esther (Anne Hathaway), and his beloved maternal grandfather Aaron (Anthony Hopkins). As the narrative progresses, Paul and Johnny get into increasingly serious trouble at school, to Irving and Esther’s escalating alarm, prompting Aaron’s eventual intervention to help transfer him to his older brother Ted’s school, Forest Manor, a bastion of conservative privilege that, as Gray makes sure we know in a pair of startling cameos, counts Fred and Maryanne Trump among its key benefactors. The transition only intensifies Paul’s sense of rebellion, however, fueling a desire to live out one of his fantasies of escape, the imaginative failure of which will ultimately lead to dire, real-world consequences for Johnny.

In nearly all of Gray’s films, the family, and often the immigrant community that is its extension, comprises an enclosed world from which the protagonist longs to be free, particularly after an outsider enters the picture, opening a window onto a vast and richer universe. Often a single image crystallizes the theme, a literal window through which the protagonist can see just beyond the threshold of their own world. Here, it is Paul’s bedroom window, which looks out to the yard where his father has built him a clubhouse in which Johnny will sometimes hide out from child services. Gray resorts to this angle only sparingly, but like so many of his images, it pulls poetic double duty, suggesting at once Paul’s immediate perception of Johnny as his friend from the wrong side of a racial-class divide and Gray’s haunted, hindsight perception of both Paul and Johnny—the cinematic images of the boy he once was and the boy he once knew—as an ill-fated romantic couple caught in a kind of eternal recurrence of systemic injustice. At its best, the film maintains this double vision, achieving an effect not far afield of Terence Davies’s Distant Voices, Still Lives and The Long Day Closes, where the fulcrum of the drama exists in the reflective gap between the past self’s experience of a present time and the present self’s memory of a past one. For Armageddon Time is the story of a child’s inability to completely comprehend his own experiences, as told from the perspective of the artist who now comprehends but can do nothing to change them.

Some have taken Gray’s intentions in this regard as motivated by white ethnic guilt, interpreting his forthright depiction of Paul’s failure to act on behalf of Johnny at the film’s decisive moment as a mea culpa. Yet what this film attempts is something tougher and more productively honest than that: to lay bare the extent to which most people simultaneously pay into and benefit from the very system that oppresses them. As American memory pieces go, Armageddon Time may be singular in the degree of its sense of rectitude, which runs so strongly against the more prismatic period reflections of other recent films upon their eras, such as Once Upon a Time… in Hollywood and Licorice Pizza. Gray’s film obeys a tight arc, wedded to an explicitly ethical framework. Not only is the movie designed like a classic bildungsroman, but its almost symphonic approach to theme, development, and recapitulation runs profoundly against the luxuriously meandering vibes that, for many, have come to signal the slovenly notion of “white nostalgia.” Finally, Gray’s film has an old-time moral stuffiness about it, a sense of right and wrong carried foremost by Hopkins’s magisterial embodiment of Aaron. It is a film of and about decency, how to ignite it and preserve it in ourselves, and encourage it in each other, against the prevailing, bullying spirit of our times.