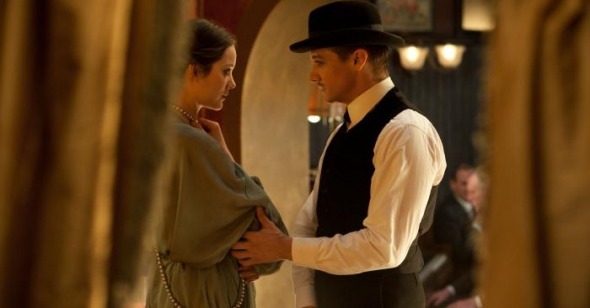 The Arrival
By Michael Koresky

We‚Äôve seen these images many times before, both as old photographs and meticulous movie re-creations. Huddled masses, tinted in amber, arriving sick, hungry, and tired at Ellis Island from points east. Men, women, and children overcome with nausea, or worse, disease caught while in transit. Packed together in tight lines waiting for inspection, their once considerable hopes clearly dwindled, they quiver with fear at arriving in a new world where they barely know the language. This is terrific, inherently gut-wrenching stuff for narrative filmmakers, harnessed powerfully in movies from Elia Kazan‚Äôs America, America to Coppola‚Äôs The Godfather Part II to Emanuele Crialese‚Äôs Golden Door; not only is the visual appeal right there on the surface, it comes stacked with preordained symbolic heft. One glimpse of that inspiring, torch-wielding statue and a catalogue of dreams and longings seemingly float across our retinae, just waiting to be confirmed or, more often, dashed.

Indeed, James Gray‚Äôs boldly titled The Immigrant begins with a shot of Lady Liberty herself, apt for a film about a woman seeking emotional freedom in exile. All is familiar: Darius Khondji‚Äôs bronze-tinted photography; Polish fishes-out-of-water Ewa (Marion Cottilard) and her sister, Magda (Angela Sarafyan), all worried saucer-eyes; the drab black and brown clothes, the heavy suitcases. It is 1921, and the women are refugees from a war, arrived with the hopes of meeting their aunt in Brooklyn. Then everything changes so swiftly: Magda is carted off for having contracted lung disease during the voyage; Ewa is left alone, accused by the authorities that she sexually compromised herself en route to America and thus risks deportation; and suddenly a hare-lipped knight in pale armor, Bruno (Joaquin Phoenix), comes along to rescue Ewa and escort her to New York, into the bosom and alleged safety of the Lower East Side. This is all dispatched with such fleetness that Gray seems to be intentionally getting it out of the way; The Immigrant aims not to be a strict dramatization of historical record or a definitive portrait of turn-of-the-century struggle but a finely etched melodrama of a woman‚Äôs subjugation that poignantly uses that history as a backdrop.

This is not historiographical Spielberg or Scorsese territory. Rather consider it indebted to the Don Siegel of The Beguiled, the John Huston of Wise Blood, or the Jack Fisk of Raggedy Man; all of these are period dramas that take place within the crevices of their eras rather than as expressions of them. This small-scale ambition works in Gray‚Äôs favor, for sure. The Immigrant is less intriguing if viewed as the umpteenth variation on the so-called dark side of the American Dream, and most compelling as an intimate anti-love story that comes into being on cross-currents of thwarted desire and romantic sacrifice. This is not new subject matter for Gray, whose Little Odessa and Two Lovers, especially, burrowed in close with denizens of tight-knit New York communities who are stalled by their own weaknesses and frustrations, and hampered by their pasts. Even when dramatically contrived or outright preposterous (We Own the Night), Gray‚Äôs films are triumphs of atmosphere: more memorable than actual plot points are the ways he visually situates people within their environments. This doesn‚Äôt make Gray a strictly technical director, however: his often claustrophobic compositions are above all expressions of the intense warmth he feels toward his characters. A humane melodramatist, he stands back but seems to take no pleasure in watching them go through the emotional wringer.

His first female-anchored film, The Immigrant instantly registers as his most outwardly emotional work yet, reliant as it is, scene for scene, on the remarkably expressive beauty of Marion Cotillard. This French actress always seems precariously perched on the edge between fragility and impenetrability; like so many great movie stars, we want to give her a hug but would be terrified of her retaliation if we did so. Whether playing a transformative role like her sensational Edith Piaf in La Vie en Rose, or one that‚Äôs in outline little more than a vaporous image, as in Midnight in Paris, she is always communicating with every steely, strangely sad feature. There‚Äôs just something about those deep-set eyes, which always seem to be looking up at the camera from some profoundly dark hollow in her heart. Needless to say this quality works exquisitely for the character of Ewa, who is called upon to be taciturn and resourceful in equal measure as she navigates a world that is no less firmly patriarchal for being so makeshift.

Ewa is reliant on the kindnesses of men, whether they turn out to be false or not. The first of her two best bets is Phoenix‚Äôs Bruno, a ‚Äúman with connections,‚Äù whose bright lapel carnation cannot disguise an inherent shiftiness in his character. From the first night that he grants Ewa a place to stay while she waits for word about Magda, the fearful woman swipes a knife from a coal bucket to put under her pillow just in case. As it turns out, Bruno‚Äôs tenement sewing parlor is, unsurprisingly, little more than a shoddy whorehouse, with the lovely Ewa being primed as Bruno‚Äôs new employee. Clearly a devious sort, Bruno is an entrepreneur, yet he‚Äôs drained of pride or confidence, and burdened with all manner of Phoenix‚Äôs trademark neuroticisms‚Äîhalting cadence, darting eyes, a general shoulder-slump that reads as profound self-hatred. At this point, Phoenix‚Äôs approach comes across as fairly telegraphed (he still sounds like that borderline-retarded teen he played way back in Gus Van Sant‚Äôs To Die For), yet his clumsiness is poignant when he‚Äôs called upon to show some flourish, as when he emcees a pageant of his prostitutes, awkwardly hawking his wares, who are dolled up as geisha girls and modern-day Cleopatras, ‚Äútemptresses to soothe the white man‚Äôs soul.‚Äù As pathetic as Bruno is, Phoenix and Gray refuse to soften him, showing off fairly early his irredeemable, erratic temper: after Ewa opens up and tells him that she and her sister escaped Poland after seeing her parents murdered by soldiers (presumably in the Polish-Soviet War), Bruno makes an ill-timed sexual advance, which she immediately rejects, resulting in an infantile, violent explosion.

Her other potential savior is the more promising yet equally slippery Orlando (Jeremy Renner); like Bruno he‚Äôs a showman but an infinitely smoother one. Ewa catches this Houdini-type‚Äôs eye while a captive audience member at his performance at Ellis Island (where she‚Äôs being held at one point for possible deportation). ‚ÄúGod, you‚Äôre beautiful,‚Äù the deeply eye-shadowed Orlando‚Äîwho‚Äôs just finished a straitjacket escape and a levitation routine set to the Humming Chorus theme from Madame Butterfly‚Äîtells Cotillard after handing her a white rose. Of course, he‚Äôs unaware that she has been claimed by Bruno, who turns out to be his cousin in the kind of gaping coincidence that nevertheless satisfies for the sense of fate closing-in it lends to the film. Renner‚Äôs impish quality works better for a smoke-and-mirrors character like Orlando than for the types of tough-jock roles in which he‚Äôs usually miscast: his attempt at dashing romanticism doesn‚Äôt always come off, but his mismatched features and constant expression of bemusement occasionally take on the bearing of a young Melvyn Douglas. There‚Äôs surely an intended sad irony to the fact that in a sea of vicious, puerile men (most of the others we meet are johns and catcallers, and Ewa‚Äôs own uncle proves to be a monster in his own right), the only gentleman is literally a magician.

Once this star-crossed trio is established, the film begins to close in tightly around them. The Lower East Side interiors of The Immigrant offer as much character as those claustrophobic, gorgeously dingy Brighton Beach apartments in Two Lovers. It‚Äôs a moody, unostentatious film; Gray, ever the cinematic classicist, prizes psychologically direct close-ups and two-shots in which character and environment are in perfect sync. Where other filmmakers try for obscurity, Gray‚Äôs approach is immediate and punchy. His characters express themselves in efficient, candid sentences (especially convincing in the voice of a main character who speaks English as a second-language). After being coerced into prostitution, Ewa castigates Bruno, ‚ÄúI don‚Äôt like you. I hate you. And I hate myself,‚Äù terse phrases turned into guttural poetry by Cotillard‚Äôs tremulous line readings. They‚Äôre echoed in the film‚Äôs affecting climax, when a self-sacrificing Bruno weeps, ‚ÄúI gave you nothing. Because I‚Äôm nothing.‚Äù In moments like these, Gray‚Äôs intentions‚Äîas a moviemaker interested in how glimmers of truth can sparkle within the parameters of what is clearly, unapologetically fiction‚Äîflower in full.

Above all, Gray is a storyteller, of the sort American film culture may not realize it desperately needs (perhaps if Ewa‚Äôs tale were chopped up and stretched out into thirteen episodes for HBO it might be receiving accolades). It‚Äôs not simply that it was shot by Khondji on 35mm film, or that Gray is able to use his limited budget to re-create the Lower East Side in the twenties with resourceful flair. It‚Äôs that, more crucially, the shape and emotional contours of Gray‚Äôs film become clearer the more we come to care about the people in it. Perhaps the most gratifying surprise of the film is that it doesn‚Äôt purport to be about the immigrant experience, but about the experience of one woman who happens to be an immigrant. As a ravishingly bisected final shot‚Äîhalf mirror, half window, looking back and forward‚Äîillustrates, hers was just one story among many, now finished, but continuing on.