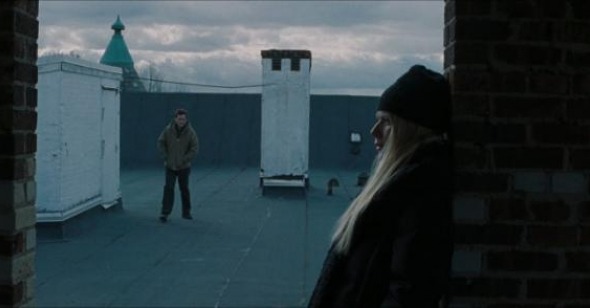 ‚ÄúThis isn‚Äôt some high school crush!‚ÄĚ yells our sniveling hero (Joaquin Phoenix) at the woman (Gwyneth Paltrow) spurning his advances. My immediate response to this outburst was one of eye-rolling incredulity, but something about this scene also impressed upon me what makes each of James Gray‚Äôs four films irritating as well as unexpectedly heartbreaking. For all its super-sized emotions and Greek-tragic aspirations, his is a body of work rendered with straight-faced, almost dogmatic sincerity, one that envisions itself as a corrective to the hipper-than-thou irony pervading much of recent American cinema. While watching a Gray movie, our powers of empathy are meant to be in full gear, and our cynicism momentarily suspended‚ÄĒa melodramatic imperative that has encountered its fair share of resistance from critics and audiences.

For those who give in to Gray‚Äôs first head-on romance, Two Lovers, watching Phoenix fall helplessly and unaccountably for Paltrow might feel like revisiting one‚Äôs own adolescent obsessions, without the reassurance that such toxic extremes of feeling can be sealed off in a hormonal teenage past. There are times when Phoenix‚Äôs protagonist, Leonard Kraditor, seems like an unintentionally comic caricature of high-school histrionics: chained to a cell phone that vibrates endlessly with calls, his voice quivers whenever his dream girl‚Äôs on the other end. What makes this film so uncomfortable is that, for Gray, the hierarchies of romantic attachment‚ÄĒdistinctions between mature and na√Įve, true and false, short-term and forever-after‚ÄĒare irrelevant. Emotions fly out at us unmediated by moral or intellectual assessment. We‚Äôre left to wonder: how desirable is this approach to human behavior, this disregard for value judgments? And how should we reconcile the sense of this film as a valentine to the highs of headlong love with its dramatization of Antonioni‚Äôs pronouncement that ‚ÄúEros is sick‚ÄĚ?

Like a Judd Apatow comedy set in a minor key, Two Lovers reflects the recent cultural fixation on uncovering the tender, fragile heart beating inside the straight male loser. Here Leonard is bipolar, artistic, jobless, and, in the first scene, suicidal. Living with his parents after getting dumped by his fianc√©e at what looks to be the tail end of early adulthood, he embodies the nightmare of masculine humiliation, though part of his charm stems from a public nonchalance about his own socially unacceptable circumstances. He cracks jokes as if he were still the class clown, hides out in a bedroom cluttered with the detritus of his youth, and peeps out occasionally to make appearances at his family‚Äôs social gatherings. After politely entertaining the romantic attentions of a sweet, Sound of Music‚Äďloving Jewish girl (Vinessa Shaw) whom his parents have pushed in his direction, he becomes obsessed with the forbidden fruit of his WASP neighbor Michelle (Paltrow), a former drug addict who refuses to let go of her affair with a middle-aged married man. From this set-up, the film launches into a detailed study of what makes people in love tick, of how new relationships turn into unwanted dependencies, and how a seemingly casual meal can become a battle of one person‚Äôs desire against another‚Äôs indifference.

Again like Apatow, Gray fumbles at the task of creating believable female characters. The most vivid women in his films are mothers, but only because, in the midst of all the flamboyantly orchestrated male torment, they serve as symbols of certainty, unconditional love, and inevitable estrangement. As in his first two films, Little Odessa and The Yards, the lost son returns home to find a wellspring of undying maternal devotion waiting for him‚ÄĒhere in the form of a beautifully understated Isabella Rossellini. But when it comes to women as recipients of love and objects of desire, Gray either throws his hands up in confusion or envelops his leading ladies in a cloak of darkness and mystery: in We Own the Night, it‚Äôs Eva Mendes in a bustier slinking down a dimly lit hallway; in Two Lovers, it‚Äôs Paltrow moving toward the camera like a ghost in a pitch-black corridor. The only strategy Gray finds to make his blind spot more acceptable here is to match Michelle‚Äôs flightiness with Leonard‚Äôs emotional instability and call it even.

But there are other areas in which Gray is uncommonly perceptive. Like the rest of his oeuvre, Two Lovers demonstrates his skill in establishing local specificity and teasing us with the conventions of first-generation-American drama. These elements‚ÄĒthe lengthy scenes set in and around subways, the juxtapositions of Brighton Beach with the Upper West Side, the affinity for Russian-Jewish dry cleaners and street stand owners‚ÄĒare never employed for their quaintness, but instead contribute to a broader vision of what it‚Äôs like to live as an ethnic family in present-day New York. Gray isn‚Äôt so much interested in elucidating the complexities of culture and community as he is in using detail to suggest unspoken tensions. The accented English of Leonard‚Äôs parents and the crowd of black-and-white family portraits on their apartment wall are enough to set us off imagining a whole history for their home, including the aspirations toward normalcy and upward mobility that underpin almost any immigrant narrative.

This sense of being an outsider‚ÄĒto family, culture, and one‚Äôs own generation‚ÄĒis what haunts Leonard, though it‚Äôs probably a blessing for the film that he isn‚Äôt self-reflective enough to articulate his troubles or have us psychologize them. Joaquin Phoenix has repeatedly played this same role for Gray, who has developed through their three films together a formula for lighting his star‚Äôs face in the most dramatic fashion: with shadows obscuring those deep-set eyes. But in Two Lovers, this stock character no longer feels like a mere construction or abstraction. The surprise of Phoenix‚Äôs performance is how it transcends his usual wan, pathetic act‚ÄĒwhich at its worst calls to mind whiny male rockers of the early ‚Äô00s (remember Staind and Cold?)‚ÄĒand finally earns his career-long comparisons to Montgomery Clift. In what he has hinted might be his final role, Phoenix injects a freewheeling humor and openness that helps us forget how Leonard began the movie trying to drown himself. But like Clift, he remains emotionally unpredictable, sometimes slurring and stumbling over his words, or speaking in a barely audible mumble that suggests childlike fragility or insanity.

While Two Lovers is reportedly just the latest riff on Dostoevsky‚Äôs hair-raising short story ‚ÄúWhite Nights‚ÄĚ (which has inspired several diverse interpretations, including Visconti‚Äôs Le Notti bianche and Sanjay Leela Bhansali‚Äôs Bollywood musical Saawariya), it distinguishes itself as all-American by engaging our memory of Clift in George Stevens‚Äô A Place in the Sun. Some of the best moments approximate that film‚Äôs pressure-cooker intensity, and its dizzying view of love as simultaneously oppressive and sublime. Unlike Visconti or Bhansali, who complemented the often outrageous melodrama of ‚ÄúWhite Nights‚ÄĚ with touches of fantasy, Gray situates us in the kind of realist anxieties about class, sex, and adult responsibility that preoccupy the Stevens film. Toward the end, Gray even undermines the romantic notions of fated love and second chance that continue to make Dostoevsky‚Äôs story so viscerally affecting.

The scene in which Leonard makes his baldest attempt to force his obsession upon Michelle may be the decisive moment for the viewer. ‚ÄúI love you‚ÄĚ is followed by the drooly ‚ÄúYou are the most beautiful, most amazing woman ever,‚ÄĚ at which point one is forced to make the choice of whether or not to hop on board this sinking ship of a romance. While cringing and wincing, I suddenly realized that all of Gray‚Äôs films pivot on the terror induced by declarations of love, which in his previous work have primarily been familial in nature, such as the unreciprocated ‚Äúlove you‚ÄĚ a young boy extends to his older criminal brother in Little Odessa, or the whispered exchange of affection that ends We Own the Night. Gray has already established himself as one of the few mainstream filmmakers who takes seriously the ways in which heterosexual men express love for one another, and with this latest film, he‚Äôs now one of the few to successfully walk the tightrope of demanding our full acceptance and empathy for a character‚Äôs romantic longing while also inspiring our disdain of it. The typical romantic drama calls upon us to believe in love, if only to show us how it jeopardizes those who experience it, but Two Lovers is singular in its ambition to critique the very premise of that emotion while still embedding us deep within its power.

Is there any other young American director this committed to exploring the many permutations of ‚ÄúI love you,‚ÄĚ and to capturing how those words disturb the air, increase the stakes, and operate as both balm and threat? What recent American film has extended more sympathy to the preposterous ways we reach out to understand and be understood? Like Todd Solondz or Neil LaBute, Gray aims to make us squeamish about being in our own human flesh, but he never subscribes wholesale to the values of those two misanthropes. While Leonard‚Äôs painfully awkward sweet-nothings may constitute one of the film‚Äôs most unforgettable (as well as most truthful) emotional gross-outs, Two Lovers never provides enough distance between audience and protagonist for us to turn Leonard into a spectacle or develop a superior or detached attitude toward his actions. Perhaps it only makes sense then that, at the film‚Äôs moment of greatest repulsion, I finally surrendered to it.