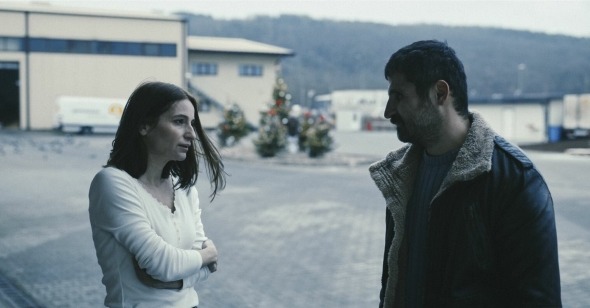 Mind Over Matter
By Michael Koresky

We’re far enough from the galvanic moment of the Romanian New Wave that its greatest figures should be more commonly appreciated for their individuated talents rather than seen as pieces of a mosaic. Unfortunately, without the sense of critical mass that builds a movement at the crest of its wave, many recent films from Romania have been barely registering stateside—never mind that Malmkrog, Intregalde, and Bad Luck Banging or Loony Porn are evidence of their makers, Cristi Puiu, Radu Muntean, and Radu Jude, respectively, at the uncompromising height of their idiosyncratic powers. These films are as visually inventive as they are merciless in their savaging of humanity’s penchant for intolerance, self-destruction, and hypocrisy, offering surprising narrative and aesthetic forms that feel born of a genuine desire for examination rather than of willful eccentricity. One of this wave’s greatest practitioners, Cristian Mungiu has also returned, offering his own expansive take on a world going to rot: R.M.N. is a welcome, productively unsettling reminder that he’s among contemporary cinema’s finest classical dramatists and perhaps one of its last remaining true beating-heart tragedians.

Mungiu’s films share a common theme: the gradual process of dehumanization as its’s experienced by those caught in the gears of social systems that reward capitulation, compromise, and emotional violence. In visually dramatizing this, he’s peerless, using carefully composed frames to position his characters within environments that close in around them, almost imperceptibly, until it’s too late. Despite the oft-spoken prizing of nonjudgment in cinema, the greatest filmmakers are often in the business of morality, and Mungiu creates moral tales that speak to his country’s post-dictatorship legacy but also register as legible to any viewer sensitive to the crushing agonies of being human. 4 Months, 3 Weeks, and 2 Days, for which Mungiu won the Palme d’or at age 39, breathlessly follows a university student as she desperately tries to secure an abortion for her roommate in late-eighties Ceausescu-era Romania. In the magnificent, gutting Beyond the Hills, still his greatest achievement, Mungiu adapts a true-life tragedy, in which a mentally ill young woman was killed in the process of an exorcism at a Romanian Orthodox community, into a multifaceted incrimination of an entire social order made up of equal parts dysfunction, intolerance, and primitivism. For Graduation, Mungiu charts a middle-aged Transylvanian doctor making a Faustian bargain in the name of trying to help his daughter, recently traumatized in an assault, get into Cambridge University.

In each of these, Mungiu makes the viewer bear witness to the incremental march towards corruption—more importantly, he makes us feel it. These are intense, weather-beaten films whose drama is no mannerism but a vivid evocation of humanity on the precipice of doom; they feel hopeless yet cathartic, dispatches from a nation still trying to shake off the emotional remnants of a past regime. In R.M.N., Mungiu maintains his penchant for slow-building narrative tension, gradually revealing dramatic stakes, yet rather than focus exclusively on one or two characters clearly wending their way through an economically dramatized moral dilemma, he takes a more panoramic approach. The small but bustling Transylvanian village where R.M.N. is set allows Mungiu to paint on a broader canvas, situating his recurring concerns about the irreconcilable persistence of the primitive within modern contemporary Europe in a region defined by the intersection of various languages, political and religious beliefs, and national origins.

Unsettled in its multiethnic diversity, the unnamed mountain village is a combustible microcosm of Eastern resentment, fear, and xenophobia. Like Transylvania as a whole—a long disputed territory that exists in a geographically in-between space—the village is people mostly by Romanians and a sizable Hungarian minority, as well as a smaller population of Germans and Roma. As might be expected, widespread unemployment and poverty following the dissolution of the country’s Communist regime has not fortified the bonds between these various groups of human beings, leading, in Mungiu’s film, to scapegoating, recrimination, willful othering, and racial intolerance. Like in his previous films, the increasingly dangerous contours of this world, so profoundly rooted in long-gestating rage, only gradually become clear, yet new to his work is a certain dramatic circularity—the sense that moving forward would be fruitless, and that the rot already goes too deep to be fully excavated.

Mungiu offers up two main characters to help us navigate this gloomy terrain, and they are studies in contrast. The burly, sullen Matthias (Marin Grigore) has come back to the village after fleeing Germany, where he worked in a lamb slaughterhouse before violently knocking down his foreman for calling him a “lazy Gypsy.” Returning at Christmastime—immediately depicted as a bleak, joyless winterscape with an electronic “Jingle Bells” chiming in the distance—Matthias shows up unannounced and clearly unwanted at the home of his estranged wife, Ana (Macrina Barladeanu). Hesitantly allowed to move back in, he tries to reconnect with his eight-year-old son Rudi (Mark Blenyesi)—a boy of constant worry who has stopped talking after seeing something frightening in the local woods—though his love often registers as bullying, fearing Ana is raising a “sissy.” Meanwhile, he is told his father, Papa Otto, a now barely verbal alcoholic, has been in decline, which forces him to wonder if there’s a genetic predisposition to depression and anxiety in his family.

Positioned in relief to the coarse Matthias, who runs on animal instinct, is Csilla (Judith State), working as the manager of the town’s bread factory. Recently divorced from a local doctor, she lives alone, spending her free time rehearsing the cello for an upcoming church concert. (She’s frequently heard practicing Shigeru Umebayashi’s swoon-inducing “Yumeji’s Theme,” popularized as the recurring romantic score from Wong Kar-wai’s In the Mood for Love, perhaps a tragicomic joke for a film so bereft of simmering hot-blooded desire.) Csilla, an ethnic Hungarian, becomes a central figure in the film’s deepening quagmire when she and her supervisor, the factory’s owner Mrs. Dénes (Orsolya Moldován), decide to hire a trio of Sri Lankan immigrants as bakers, needing a full workforce to secure a crucial grant from the EU. As the arrival of the migrant workers begins to stoke resentment from the bigoted locals, voicing their bitterness towards the men (whom they constantly and incorrectly identify as “Muslims”) for taking jobs they refused in the first place, Csilla increasingly positions herself as a voice of reason and thoughtfulness, befriending Mahinda (Amitha Jayasinghe), Alick (Gihan Edirisinghe), and Rauff (Nuwan Karunarathna), and finally becoming an object of scorn herself for her professional and personal ties to them.

Matthias and Csilla are defined by their contradictory qualities—brutish physicality vs. progressive compassion, mindless survival vs empathy. She’s articulate, meditative; he’s taciturn and gruff, given to quietly repeating other people’s words, murmuring them back to himself as though playing catch-up with a world that’s always two steps ahead. Yet these two opposites had been having an affair before Matthias had left to work in Germany and have now rekindled their romance, their emotional and physical connection to one another serving to intensify a portrait of a community in which any given pairing of people seem somehow at odds, if not combustible.

Csilla helps fill the purposeful void left at the center of the film by Matthias, a disturbing, alienating presence who’s perhaps Mungiu’s first true cipher of a protagonist. Hulking and reticent, he stalks the film like the many bears that surround the village at night and make the carrying of a rifle necessary for the townspeople. Matthias looms as a menacing presence in many shots, as when he appears at Csilla’s back door, standing silently behind a frosted windowpane, patiently yet insistently waiting to be let in. “People who feel pity die first,” he tells Rudi at one point in an attempt to impart a life lesson to his “soft” son, already traumatized by unseen forces and further terrorized by dad. He’s driven by animal instincts as clear yet unknowable as the degeneration spreading through Papa Otto’s head, seen in a brain scan (a Rezonanta Magnetica Nucleara, giving the film its title) that Matthias pores over for undetectable evidence of his own possible decline and which provides Mungiu with his clearest metaphor for the encroaching disease of modern global intolerance.

The film’s various narrative strands culminate in a sequence that displays Mungiu’s deftness at synthesizing his themes into a single dramatic moment. In one 17-minute take that’s undeniably bravura without feeling show-offy, the villagers, mayor, and religious leaders converge for a town meeting to debate the recent developments at the bread factory. Romanian locals have begun angrily posting racist rants on Facebook groups about the hiring of the Middle Eastern immigrants, with some also voicing discriminatory complaints about the Hungarian population; meanwhile the local Romanian Catholic priest, under pressure from his bigoted flock, has denied the immigrants entrance to his church and has petitioned Csilla and her boss to fire the men. So greatly attended that they’ve had to move from the church to the larger cultural center, the meeting degenerates into an airing of petty, bigoted grievances, which pinball off one another with mounting fury. The town’s underlying anti-EU sentiment finally emerge like a trumpet blast, much of it directed at a young French NGO worker who has been in town to study the local bear population for conservation; seen as an indicator of useless Western liberalism, he instigates the village’s entrenched anti-Black and anti-Arab bigotry—just like in France, one townsperson says to him, we’ll have the “wretched swarming us.” Mungiu’s single, compositionally complex shot puts Matthias, Csilla, and Mrs. Dénes in the mid foreground, facing the camera while chaos gradually erupts behind them, layering sound recorded on various microphones around the room, a rising concert of conflicting voices that somehow never drowns itself in cacophony.

Though this scene effectively and neatly creates a proper climax, Mungiu finally reveals that he’s operating in a mode less beholden to narrative efficiency than in his other, more classically streamlined films. Soon, he moves into a denouement that enters almost oneiric terrain. The camera weds closely to Matthias as, armed with his rifle, he begins a series of abstracted, vaguely threatening nighttime perambulations. What he’s ultimately seeking is unclear (the motivation, geography, and chronology of the sequence remain vague to me, even after four viewings). The sequence at once confounds easy logic and ties together Matthias’s various anxieties and resentments, uniting the presences of Csilla, Ana, Rudi, his father, the immigrant workers, and even the bears, who make a phantom-like appearance, in a dreamlike ramble: a quest with no ending, no solution, no reconciliation. Perhaps Mungiu is trapping us inside the prison of a mind burdened by the ever-spreading diseases of masculinity, ignorance, and pride.