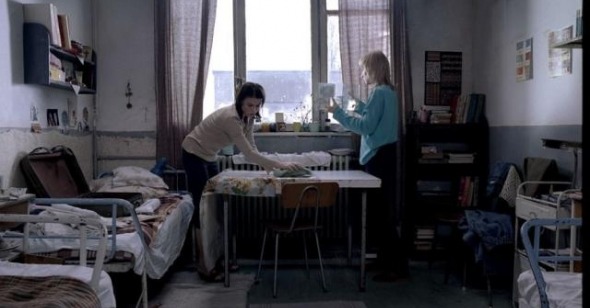 On the Verge
By Michael Koresky

Many have proclaimed that the only misstep in Cristian Mungiu‚Äôs searing, expertly paced Palme d‚Äôor winner 4 Months, 3 Weeks, and 2 Days is its deployment of one particularly in-your-face climactic image. The content of the shot shouldn‚Äôt come as much of a surprise to those who know the subject matter of the film, yet most viewers I‚Äôve spoken with have nevertheless deemed it an intentional ‚Äúshock.‚Äù While I certainly can‚Äôt quibble with anyone‚Äôs gut reaction to Mungiu‚Äôs decision to finally show and not tell, to me this image is integral not only to the film‚Äôs success but also to its nature. Mungiu‚Äôs movie may not need more plaudits, yet it might need defending. What we have here is a film in which (with one notable narrative exception) we see all its protagonist sees, hear what she hears, swallow fear, intake images just as she does; that 4 Months, 3 Weeks, and 2 Days, ostensibly the story of an illegal abortion, is greatly privileged to the point of view of a young woman who helps her friend procure the abortion and not the pregnant girl herself illustrates just how trickily experiential the film is. In fact, despite the controversial, long, lingering close-up in question (which, in my opinion, allows the viewer to see what they don‚Äôt want to see, as a means to getting over the dread associated with it and moving on), 4 Months is not really an ‚Äúabortion movie‚Äù at all. Rather, it‚Äôs unerringly fixated on matters of female self-preservation, survival, togetherness, and alienation.

This is all enacted in 1987 Romania, during the waning days of Nicolae Ceausescu‚Äôs reign, and though the urgency of the breathless narrative might seem tenfold with that country‚Äôs economic collapse and essential police state as a backdrop, 4 Months ‚Äô narrative often feels more universal than site specific. Even without a basic knowledge of Romania‚Äôs political and financial instability of the period and Ceausescu‚Äôs specific social dictates (in 1966, the Communist leader overturned a nine-year-old ruling legalizing abortion, partly to increase birth rate in the country), one would find the central dilemma of 4 Months, and its attendant aesthetic (bruising, tactile), nothing if not instantly identifiable, even relatable. The clandestine nature of abortion, legalized or not, may be what fuels the narrative of the film, yet it‚Äôs the human nature of the women navigating this world that spiritualizes it. 4 Months is more concerned with the plight of women forced to society‚Äôs fringes than the minute details of abortion in late-Eighties Romania.

Despite the film‚Äôs supposed shock moment (which is shot and framed with a saddened stillness rather than Gaspar No√©-like pummeling), the images from 4 Months that lodge in the brain are as simple as could be: a woman sitting at a table, in two different scenes, shot from two different angles. It‚Äôs a tribute to Mungiu‚Äôs expert direction that the simplest of setups can yield the most harrowing and eye-catching of results. In the first, Otilia (Anamaria Marinca), who has just aided her university roommate, Gabita (Laura Vasiliu), in finding a shady, back-alley abortion doctor, a hotel room, and enough cash to cover the procedure, finds herself guilt-tripped into attending her boyfriend Adi‚Äôs mother‚Äôs birthday party. This is to be her introduction to the family, and one would be hard-pressed to find a more inopportune time to meet the parents. The composition is less a revelation than a natural: the camera stays medium close to Otilia, who‚Äôs perched at the end of the dining room table, sandwiched tightly between Adi‚Äôs parents, their friends and family. As a spirited conversation goes on for an uncomfortably long time (and includes some old chestnuts about how the younger generation no longer respects their elders), Otilia remains basically inert and silent in the center of the frame, with Adi hovering directly behind her, noticeably antagonized by her lack of interest and disengagement. The embarrassment of the moment is unavoidable, yet Mungiu‚Äôs choice to linger for such an extended period on a seemingly trivial sequence, stagnant and peripheral to the unceasing forward motion of the rest of the film, proves that he‚Äôs more interested in subtle fluctuations of character and movement than in grand statements.

It also simply further proves, alongside the rest of the film‚Äôs bravura compositions, that Mungiu has an innate sense for the camera‚Äînot as thoroughly fixed on his protagonist‚Äôs point of view as the Dardennes tend to be, but remaining close enough to Otilia that many have invited comparisons between his aesthetic and that of the brilliant Belgian brothers, Mungiu always finds the perfect way to frame his images and express his ideas visually. Whether ensconced in grim realism or, at times, bathed in almost noirish shadow, 4 Months displays a true film artist at work. This is especially encouraging for anyone following the sudden ascension of Romania to the forefront of world cinema. After Cristi Puiu‚Äôs wildly hailed descent into the madness of contemporary Romanian health care, The Death of Mr. Lazarescu (ranked number one on indieWIRE‚Äôs wide-ranging critics‚Äô poll for 2006) and Corneliu Porumboiu‚Äôs elegantly funny, minimalist political exegesis on the 1989 revolution and overthrow of Ceausescu, 12:08 East of Bucharest, 4 Months comes across as the most accessible. Mungiu‚Äôs instincts are on-target nearly scene for scene, but its aesthetic is not as rigorous (read: alienating, for some) as those in the other two; focused on character, motivation, and universal notions of marginalized sisterhood, 4 Months could bring the Romanian new wave a lot closer to mainstream art-house acceptance.

Like Lazarescu, 4 Months takes the form of a procedural, a long day‚Äôs journey into an ever-spreading darkness of night in which the establishment allows life to slowly slip away. Yet unlike Mr. Lazarescu, who loses his humanity bit by bit until he‚Äôs nothing more than flesh (or, depending on your take, a transcendent body), Otilia, and to a lesser extent Gabita, only grow in stature as the film continues, right up to its dramatically abrupt black-out. Despite Mungiu‚Äôs purposeful attempts to capture them uncomfortably within the frame, and despite a series of dreadful occurrences in which they are violated by a succession of looming male figures, it‚Äôs difficult to think of them as mere victims. Trapped in a social structure that despises them, and especially their bodies, these two women remain, finally, dignified.