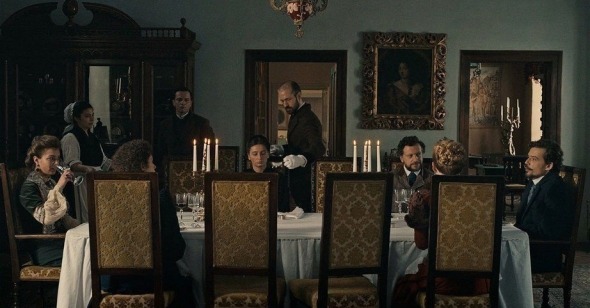 Cristi Puiu’s Malmkrog makes a counterintuitive yet intriguing appeal to viewers—one might clumsily bill it as the “three-and-a-half-hour Romanian Russian aristocrat philosophy film.” This basic summation generally corresponds to what is actually in the film: this is indeed a long movie, and it does consist largely of philosophical dialogues, conducted by Russian aristocrat characters, in about as unabridged a form as one is likely to encounter on the silver screen.The philosophy in question comes courtesy of Russian thinker Vladimir Solovyov, a heterodox figure whose work also spanned theology, poetry, and literature. The writings adapted in Malmkrog are taken from his dialogue-based treatise Three Conversations About War, Progress, and the End of History, which he wrote in the spring of 1899 (he would die in 1900). These conversations are certainly philosophical in the idiomatic sense, but they bear little semblance to academic philosophy or indeed most of the work that would define the field in the coming century. Accordingly, long stretches of the conversations do sound like reasonably intelligent people trying with varying levels of success to address the most pressing issues of their tumultuous times, such as violence, nationalism, and the nature of evil—and from here, it’s relatively easy to make the connections to the most heated concerns of our own day.

Yet despite the provocative nature of its subject matter, the biggest controversy around the film has come from some extracurricular comments made by Puiu himself, when, at the film’s Romanian premiere, the director went on a combative anti-mask tangent. In all fairness, Puiu wasn’t criticizing mask-wearing on the whole, but rather the prospect of wearing one throughout all 200 minutes of Malmkrog, which is meaningfully different from the “Boaters for Trump”–style antisocial pseudoscience, even if it’s an odd moment for the director of such an uncompromising film to start taking an interest in viewer comfort. While this does fit into a pattern of right-leaning statements Puiu has made in recent years, most notably coming out in support of an amendment to the Romanian constitution outlawing gay marriage (happily, it failed due to insufficient turnout), this is not to begin a debate about “separating the art for the artist” or any such thing. Rather, it’s useful context, lest we too hastily ascribe to Malmkrog the basic left-liberal attitude that is the largely unquestioned norm of international film culture.

Questions of interpretation are integral to the experience of Malmkrog—not for nothing did Puiu title his 2013 adaptation of the same Solovyov text Three Interpretation Exercises, which documented a reading of the Three Conversations by actors under his direction. Malmkrog distributes the dialogue among Russian aristocrats, speaking French, and sequestered away in a stately manse in the mountains of Romania, showcasing a sort of pancontinental cosmopolitanism that would largely be ushered into history’s dustbin by the two world wars. The actors interpret their often dense monologues with an admirable naturalness and, perhaps more importantly, truly work to convey the act of listening. In many ways, Puiu’s work in guiding the actors through the genuinely demanding material is a more impressive achievement than the heightened realism of his most celebrated film, The Death of Mr. Lazarescu.

The five primary characters (three women, two men) represent various schools of thought, most saliently gleeful European chauvinism and a naïve Tolstoyan austerity, though it’s not always so easy to map their words onto extratextual forces. Their consummately belletristic conversations often feel more like literature than anything else, outwardly reminiscent of Russia’s great 19th-century novels of ideas, particularly the work of Solovyov’s friend, Dostoevsky. (The first of the conversations makes extended reference to the same Ottoman war atrocities that feature in the famous “Grand Inquisitor” scene in The Brothers Karamazov.)

Yet despite these sometimes uncanny resonances, the film deviates fairly decisively from that model. Dostoevsky and Co. may have incorporated the ideas of the time into their work, but these ideas were often vehicles for deeper and more heated human passions. Malmkrog, on the other hand, is a defiantly anti-psychological film, giving us minimal insight into the characters’ backgrounds or relationships. Puiu seems to willfully thwart the most prominent assumptions of what cinema is supposed to be: this isn’t quite “visual storytelling,” let alone some Ebertian “empathy machine.” So what is it? Far more than the average film, Malmkrog seems to perversely beg the question of its own raison d’être.

In its curious mixture of literalism and abstraction, Malmkrog recalls the period-based recent work of Catalan filmmaker Albert Serra, particularly Liberté, which does for the body what Puiu’s movie does for the mind. (For those not in the know, Liberté consists of people performing sex acts in the woods for a little over two hours.) Puiu is a much less arch filmmaker than Serra, but both seem interested in forcing a kind of confrontation with history, ensuring that the element of recreation is not obscured by such distractions as melodrama and plot. In this sense, for all their echoes of the present moment, the film’s characters must be reckoned with as creatures of the past.

In approaching representations of this period—a stretch of the late 19th and early 20th century we might call pre-WWI modernity—there is often a temptation to resort to a sort of historicized dramatic irony, applying our knowledge of the destructive, transformative things to come. It’s a nice feeling: with the advantage of hindsight, the latter-day viewer can look down upon all these fancy and confident people who know not what catastrophes await them—unlike we the clever people of today. In Malmkrog, the present does not wholly refrain from bearing down on the material—in particular, an ambassador’s discourse on the superiority of Western civilization is conspicuously, inexcusably racist, a grotesquerie that Puiu’s direction and editing works to emphasize. Still, Solovyov’s text generally resists ready integration into contemporary discourse, particularly in the long theological dialogues that are its effective climax. What is the relevance of the theory of mass resurrection—the final triumph of divinity over evil and death, as represented by the literal return of the dead to life—to the issues we face today? Why might we need such an idea now more than ever?

The film itself provides no indication as to why it should. Instead, it forces us to listen to such a theory for a period of time that is extremely long by cinematic standards. This kind of sweeping metaphysical conjecture is wildly alien to contemporary sensibilities, such an extravagant example of that era’s utopian obsessions as to almost come off as a reductio ad absurdum of 19th-century optimism. But it’s likewise worth noting that these ideas were taken very seriously indeed. Some of the West’s earliest rocket scientists were Russian intellectuals influenced by cosmism, an innovation of Solovyov’s contemporary Nikolai Fyodorov, who wrote about precisely this sort of mass resurrection, the happy return of all our ancestors, hence the need to colonize space.

Such a thought accords with a certain morbidity that has existed throughout Puiu’s career, a constant interest in death and what it represents, from Lazarescu to the sudden violence in Stuff and Dough to the funereal setting of Sieranevada. Despite the film’s somewhat mysterious approach to time, the chiming of clocks is a consistent presence, a sardonic reminder of both time’s inexorable passage and Malmkrog’s own epic duration. Puiu’s preoccupation with the end has likewise been accompanied by a mystical tendency that has a subtle grandiosity to it, as in the portentous name of his most famous character (“Dante Remus Lazarescu,” repeated ad nauseam). Even the relatively naturalistic camerawork in Sieranevada has been credibly ascribed to the viewpoint of the deceased. In Malmkrog, the mystical strain comes at last to the fore, assisted by Solovyov’s book and ideas.

Though Malmkrog consists almost entirely of long dialogues developing these ideas, there is one exception, the film’s strangest and most unignorable divergence. It happens during lunch at the dining room table, notably, immediately after the ambassador’s bigoted discourse on his dream of a global Europe. First, a strange sound comes from upstairs, a perhaps anachronistic jazz recording, though it’s too indistinct to know for sure. The host then begins to ring for his servants, who do not come after successive calls. The tension mounts; the characters then get up to investigate the situation themselves, but as they cross from the dining room to the kitchen, they encounter the panicked help. Before they can so much as ask what’s going on, a spray of gunshots rings out, shooting them all dead.

The next thing we see is the characters in an extreme long shot outside, dark coats, silhouetted against the winter snow. They then get back to their conversations, but they are now wearing different, more formal, black clothes. The nature of the violent interlude is never explained; instead we get a long and drawn-out conversation about Christianity, morality, and resurrection. Again, we are faced with an exercise in interpretation, as there is no way that the discrepancy here can be resolved within conventional narrative logic.

Was the sudden massacre an absurdist flight of fancy, a directorial comment on the ultimate fate of his aristocratic protagonists? Or have they indeed, somehow, died? From the beginning there is something vaguely purgatorial about the whole environment, in which the outside world figures as almost unreachably abstract. But if this is indeed Puiu’s attempt at resurrection, it’s a far cry from the miracle of Ordet, let alone the utopia of Fyodorov’s cosmists. If they have been brought back to life, it is primarily so we might see them, and hear their ideas more or less intact, grappling with a world we have left behind. As miracles go, it’s a somber one, lacking resolution or catharsis. And so the conversation rolls on.