Best of the Decade #18: The Death of Mr. Lazarescu 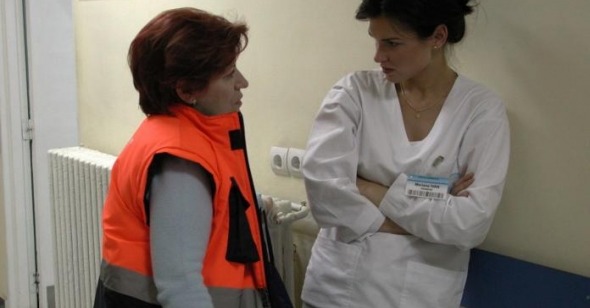 Paradise Deferred
Lauren Kaminsky on The Death of Mr. Lazarescu

The eponymous hero of Cristi Puiu’s 2005 film The Death of Mr. Lazarescu is dwarfed by his epic name. This man, paunchy, disheveled, and suffering, is Dante Remus Lazarescu. Evoking Dante Alighieri, Lazarescu descends into an inferno where each circle of hell takes the form of a different hospital. He has no familiar guide to comfort him as he traverses this purgatory (his brother-in-law, Virgil, lives far away and is only good for a loan), and he is older and weaker than the literary legend who bears his name. Lazarescu’s second name conjures the disappointment of Romulus’s slain twin brother, who never founded Rome. For all of the deaths foretold in these names, there is redemption too: after all, Jesus brought Lazarus back from the dead. And just as Dante’s Divine Comedy is a masterpiece of Italian literature, so does Puiu’s film deserve its place in the burgeoning Romanian cinematic canon. But Dante’s depiction of the Christian afterlife was not only for Italians, and Puiu’s film is hardly specifically Romanian: it’s a universal human parable of life, cowardice, kindness, and death.

As it turned out, The Death of Mr. Lazarescu unofficially inaugurated a new era of heady filmmaking by young Romanian directors. Like his countrymen Corneliu Porumboiu, who attracted international acclaim with 12:08 East of Bucharest (2006) and Police, Adjective (2009), as well as Cristian Mungiu, whose 4 Months, 3 Weeks and 2 Days (2007) won the Palme d’Or at Cannes, Puiu has come to represent a new wave in Romanian film. New York Times critic A. O. Scott has noted that in the three years leading up to 2008, “four major prizes at the world’s preeminent film festival went to movies from a country whose place in the history of 20th-century cinema might charitably be called marginal.” Boom times for Romanian film, the latter part of this decade has invited us to pay narrowly provincial attention to the Romanianness of this particular national cinema, begging comparisons between films whether or not they are warranted. In light of this, The Death of Mr. Lazarescu seems to tell the story of one Romanian dying in Bucharest after the fall of communism, but decades later it will continue to remind us that we humans all die the same humble death.

Near the film’s beginning, Lazarescu, a shabby old man living in a cluttered apartment, strains to stand after tending to an ungrateful housecat, the first sign of trouble. A month before his 63rd birthday, he complains of a headache and nausea, which he attributes to ulcers he suffered years ago. “Yeah, I drink, like any other man,” he says to the ambulance dispatcher he has called, and he pours himself another big glass of double-strength moonshine out of an unmarked plastic bottle. Self-medicating amidst dirty dishes, he rings the neighbors to ask for a painkiller, but is rebuffed both by a lecture about his drinking and the excuse that they only buy homeopathic drugs. Everyone wants him to stop drinking and get rid of the cats, but these small pleasures are Lazarescu’s only comforts. For a man who talks to cats, this terrible night will offer probably more human contact than he’s had since his wife died ten years prior. “My, you’re slow,” the neighbor says to his wife, sent to fetch some pills. “You should be sent to fetch death.” By this point in the film, a death forestalled still seems like a good death.

When the ambulance finally arrives, a no-nonsense EMT (Luminita Gheorghiu) examines him on the couch and decamps for a cigarette in the kitchen, where Lazarescu tells her that smoking, drinking, and all vices are allowed. Unqualified to make a diagnosis, she nevertheless suggests that he has colon cancer and takes him to the hospital in a beat-up old wagon. (In a sad irony, she was right about Ion Fiscuteanu, the actor playing Lazarescu, who died of colon cancer in 2007.) When Lazarescu complains, the snide young ambulance driver tells him that the new vans are just for emergencies. Lazarescu rebukes him for his rudeness, “We’re just a bunch of miserable people, mister.” Later, the EMT asks him if he’s feeling nauseous, and Lazarescu quietly says, “I’m feeling melancholy, ma’am.” Misery, melancholy—these are the qualities of being that his doctors are least equipped to measure; they’d rather focus on taking his blood pressure, which they do again and again. As his condition deteriorates, a doctor tells him that he’s not making sense. Lazarescu has the last word: “I say things you don’t want to understand.” And then he loses language.

It’s excruciating to watch Lazarescu suffer while his interlocutors insist he will sleep off the hangover and feel better in the morning. By virtue of the film’s title, you know that he’s seriously ill, and you want them to take him seriously and bring him to the hospital. But what is most sensible is, of course, in this case, the least humane. Acknowledging this is akin to the realization that it is merciful to shoot maimed horses—yet cowardice in the face of death makes us inadequately committed to humane action. The EMT stays with him long enough to show us that she is good and kind, despite her initial coldness, but we gradually realize her devotion to him would have been better expressed in leaving him to die at home. Instead, arrogant ER doctors touch Lazarescu with ungloved hands and ignore her suggestions. They claim to be unable to treat him, forcing her to take him to four different hospitals, leaving behind a trail of flimsy, stamped forms. Puiu shows that the doctors are not bad people; some eventually try to help, but his death is a part of their work. Flirtations, dirty jokes, marriages, divorces, children, birthdays, weddings—the stuff of life exists in them, making Lazarescu’s departure from the world that much more acute.

Leading us through fluorescent-lit hallways to chilly rooms, the camera’s mobility and closeness to the patient’s perspective gives the film a documentary feel. In the absence of establishing shots, we find ourselves disoriented, ready to submit to doctors’ orders. Puiu’s film is an indictment of the Romanian health care system, with its bureaucratic inefficiencies, hierarchical brutality, and appalling bedside manner, and it is located in a specific post-communist Romanian context, in which all public services seem underfunded, leaving medical professionals underpaid and hospital facilities in disrepair. Of course, we Americans will find much that is hauntingly analogous to our own experience. While the current national debate on health care here heightens the political relevance of the Romanian scenario for us, the similarities were already there when the film was released in 2005, whether or not we could see them. By training a camera on one man in his final hours of procedural, diagnostic, institutional treatment, Puiu challenges us to sit with the universal, unutterable agony of care for the dying.

After his descent into hell, Lazarescu’s loss of consciousness suspends him in purgatory. Since he has no Beatrice to guide him to heaven, we cannot know the fate of Dante Remus Lazarescu. His daughter Bianca lives in Canada and does not call him; the prospect of visiting her over Christmas is all he has to look forward to, and the hope of this it seems is enough to live on. The film never sends us to consult a thick medical file for the answer, since doing so would reinforce the authority of the profession focused so much on the body and so little on the person, let alone the soul. Autopsies are only performed on the deceased, so the exact cause of the death of Mr. Lazarescu remains a mystery in the best sense of the word, the satisfying finality of paradise withheld.