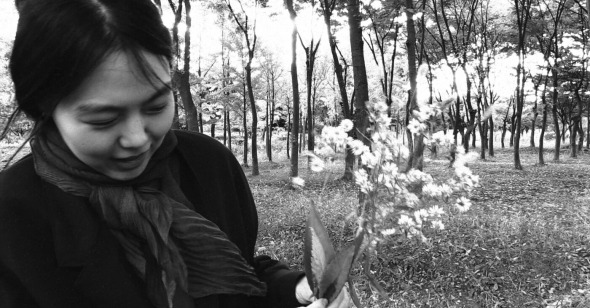 Another Look
By Dan Schindel

In his ongoing longform project of iterative cinematic autofiction, Hong Sang-soo has been fashioning a series of low-budget, low-stakes works, each scantly scripted before production and then responding to new filming conditions and real-life developments. Supremely confident in his methods, he’s now fulfilling most of the production roles. On The Novelist’s Film, he is director, writer, producer, cinematographer, editor, and composer. The only non-cast credits are Seo Jihoon for the sound and Hong’s frequent collaborator Kim Min-hee as production manager (she, of course, is also acting here as well). This iteration has more obvious parallels to the lives of its creatives than anything in the Hong oeuvre since 2017’s On the Beach at Night Alone. In that film, Kim played an actress reeling from public scandal because of her affair with a married director—less than a year after Korean tabloids began buzzing over Kim’s affair with Hong. Kim lost endorsement deals and allegedly even her management company because of the scandal, and since then has only acted in Hong’s works.

In The Novelist’s Film, Kim again plays an actress, Kilsoo—who, like her, became known through a series of high-profile roles but has in recent years stuck to independent work. Main character Junhee (Lee Hye-yeong) senses a kindred spirit; a writer, she has similarly been releasing low-key books that seem a step down from the popular work that made her famous. This is reinforced by the conversations Junhee has before she encounters Kilsoo—first with an old friend whom she had lost touch with, and then with a filmmaker who was supposed to direct an adaptation of one of her books, which ultimately fell apart. After linking up, Junhee and Kilsoo participate in multiple metafictional conversations with other characters about what constitutes a worthwhile use of one’s creativity. During one obligatory Hong group drinking scene, a poet carelessly calls Kilsoo’s career turn “a waste” of her talent, precipitating a long, semantically contentious discussion. “She should keep shooting big commercial films to not waste her life?” Junhee challenges. Here Kim reclaims the narrative around her career—contra any rumor that she’s been “ruined” as an actress by the scandal, she asserts that this is in fact the kind of work she prefers.

There are further ways in which The Novelist’s Film actively plays with its real-life context. Junhee finds new inspiration with Kilsoo and proposes that they make a little film together—one that’s, essentially, a Hong Sang-soo film. In another dizzyingly meta sequence, Junhee explains her idea to an uncomprehending collaborator. Among other things, she must clarify that even though it’ll be based on real life, the movie will not be a documentary. “I’ll write a story, but that won’t prevent real things emerging from the events I set up.” Hong has, with supreme playfulness, put forth a helpful cipher for his method—giving a behind-the-scenes look at the process, laying out its philosophy, and demonstrating the artistic fulfilment it offers.

For those on Hong’s wavelength, there’s great pleasure to be found in the particulars that he and his coterie uncover through each film, within the superficially identical aesthetic and vibe that persist throughout them. He is one of the few directors neither ignoring nor fixating on the COVID-19 pandemic; he simply captures its everyday effects. Characters fiddle with their masks (some wearing them incorrectly). A movie theater has tape on alternating seats to enforce distancing. More specifically, there are the interactions that are wholly unique to each go-around. Hong anticipates the found material that shapes each of his stories by setting up characters for chance encounters. Mundane conversation, like noting the curve of a river from a tower observation deck, will deepen to the point where guards drop and the characters start saying what they really think and feel (often with the aid of alcohol). Hong has by now sharpened a talent for dialogue that’s resonant in its bluntness. See one exchange Junhee has with her old poet friend. Him: “It was so nice when we drank together.” Her: “That was long ago. You were really cool then.” Him “Really?” Her: “But you’ve gotten old.”

With The Novelist’s Film, Hong and company reflect on how, in middle age, they have willingly submitted themselves more to the potential of randomness in their art. He has previously described his philosophy as “infinite worlds possible” (most literally exhibited by Right Now, Wrong Then, which presents two wildly different scenarios from the same instigating premise). Like many of Hong’s recent works, The Novelist’s Film is in black-and-white, but when we finally get a glimpse of the eponymous film-within-the-film at the end, it’s in color—a simple but striking aesthetic distinction that conveys how, if attentive and receptive, one can draw something new from the mundane world.