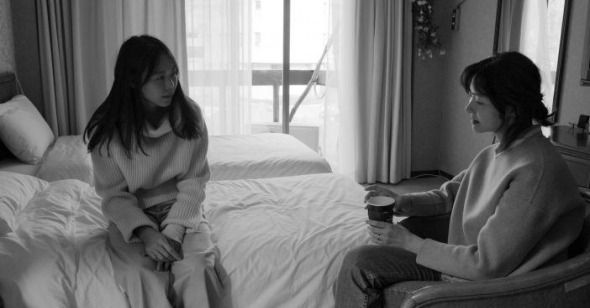 Step and Repeat
By Courtney Duckworth

Near the middle of Hong Sang-soo’s brief new film Grass, writer Ji-young (Kim Sae-byuk) lingers in an upstairs café. A flat, silvery sunlight floods the room. Because of an earlier conversation, we surmise she is waiting for someone, though we do not know—and never learn—who. Perhaps she has fibbed about a scheduled meeting to elude the coaxing Kyung-soo (Jung Jin-young), a male actor who propositions her by offering a secluded “writers’ retreat,” an idea she spurns by saying one should write alone. But there is no clear motivation for what she does next: Ji-young descends the stairs, only to turn and ascend again, as if her musculature has short-circuited. At first, her actions may stir our impatience. In a tireless loop, she tramps up and down the steps, first vexed, then coltish, then radiant with apparent bliss. Soaring strings fill the otherwise scoreless soundtrack. Through determined repetition, she attains a kind of grace.

Ji-young’s exercise mirrors the prolific output of South Korean director Hong Sang-soo, who has released five features in twelve months, including two at this year’s New York Film Festival: Grass and Hotel by the River. (The fest screened The Day After and On the Beach at Night Alone last fall.) Critics often remark on Hong’s brisk pace, and Hong ventriloquizes his critics via self-flagellating artists. The aforementioned Kyung-soo frets over “recycling material”; a writer in Hotel by the River mutters that one mid-level director “doesn't make films that appeal to the masses, but he's hardly a real auteur. He just seems ambivalent.” Ambivalence is Hong’s stock-in-trade. Neither self-inflicted jab from his films hits far afield from his circuitous approach—one that has yielded increasingly contained, almost hermetic films set in ordinary environs, with a familiar set of actors, and narratives of such minor shadings that they sometimes scan like hurried charcoal sketches. But the repetitiveness of his project lulls us into surprising moments of realization. We are trained, as when Ji-young repeats herself, to fix our eyes on the slight alterations between films.

Hotel by the River, which premiered at the Locarno Festival in August, finds Hong in a melancholy mood. He avoids the puckish pirouettes in time and the structural games of last year’s films for something more subtle and spare. Concurrent narrative strands follow two groups, who touch but never quite collide. In one, the venerated poet Ko Young-hwan (Ki Joo-bong), shaken by sourceless premonitions of his death, summons his semi-estranged adult sons, Kyung-soo (Kwon Hae-hyo) and Byung-soo (Yu Jun-sang), to the sleepy riverside hotel where he lives at the admiring owner’s behest. Masculine hesitancies and post-traumatic neuroses mar the reunion, and a succession of screwball slip-ups keep them apart. Across the hallway from Young-hwan, Sang-hee (Hong fixture Kim Min-hee, more a force than a muse) recovers from her affair with the help of her friend Yeon-ju (Song Seon-mi). Sang-hee has also burned her hand, and its stark white gauze makes her enduring emotional wounds visible in the frame. The two women pass much of the film in slumber, cocooned in a shared bed, sometimes stirring for murmured conversation. When a swift snowfall blankets the riverbank, Sang-hee and Yeon-ju marvel that they slept through its silent descent: “How could so much come down so quickly?” Kim Hyung-koo’s black-and-white cinematography lends their stroll through the voidish expanse a ghostly quality.

Rarely has a Hong film been so unpeopled, so strangely solitary. No other guests putter around the Hotel Heimat, and its proprietor—Young-hwan’s benefactor—remains off-screen even when he later boots the hapless writer from his room for, the sons speculate, refusing his friendship. (The film’s last gasp stokes the suspicion that the absent owner stands in for some other figure: our extra-cinematic auteur or a more cosmic one, with the power to punish when unacknowledged.) The sole human presence besides our troubled quintet is a puppyish hotel employee who pursues the autographs of Young-hwan and Byung-soo, the “ambivalent” filmmaker from above, with the not-quite-repentant refrain that she should leave them alone.

Fractured and bisected shots thicken the film’s eerie pall. In many of Hong’s films, the camera omits establishing and point-of-view shots to instead segment the space in a way that thwarts the viewer’s full grasp of it. Last year’s The Day After uses this mode to blur a male writer’s two female assistants—one an ex-lover, one (Kim Min-hee) stormily uninterested—and compare his careless handling of both, but here the aim is estrangement. Hong isolates his characters in space to stress their inability to connect with one another. This finds a punning counterpoint when Young-hwan unfurls the meaning of one son’s name as “side by side.” Our word-wise poet forgets that those who dwell side by side may not necessarily touch. Young-hwan, in fact, spends considerable screen time wandering away from his sons to amble the palatial hotel alone in a recapitulation of their alienated relationship. Near the snowy Han River, he makes his first contact with Sang-hee and Yeon-ju, but his fumbling insistence on their angelic beauty does nothing but break their reverie. That Sang-hee and Young-hwan never meet inside the walls of the hotel, despite their shared residency—and that his past parallels her married ex-lover, had his guilt not parted them—doubles down on the sense of failed kismet, of two strands that don’t quite spark, even when the elements assemble in perfect symmetry.

Another kind of solitude is circumscribed in Grass: that of the lone person existing among linked others. The film hews closer to the cinematic formula we expect from Hong, ditching the obscure effects of Hotel by the River’s handheld camera and startling scene inserts. Instead, Grass relies on his so-called “table shot,” centering characters over whatever coffee-cluttered or soju-soaked table they then occupy in a close-cropped master shot punctuated by occasional zooms. Over one day in a secluded, side-street café, a liminal way-station not dissimilar to the Hotel Heimat, romantic and platonic couples gather to dissect the fallouts of their torrid emotional lives. Speakers snipe, hush, or falter over untouched mugs as Kim Min-hee’s Areum—in a possible reprise of her same-named writer character in The Day After—lurks behind her laptop to type all she observes. One pair shouts recriminations over a mutual friend’s suicide. Another hems and haws about sharing an apartment after a suicide attempt. Kyung-soo offers to “collaborate” with Ji-young.

Occupying the same space, these mini melodramas nonetheless unfold in sequence, raising questions about their relationship to one another. Are the conversations happening simultaneously? Or are we seeing them—as Areum does—segmented? One even wonders if the narratives are a mere manifestation of Areum’s writing. She concludes each, after all, with a sometimes sentimental, sometimes bilious, voiceover that summarizes her feelings. (One barbed gem: “Pretty and composed—amuse yourselves. Don’t think about your own death.”) Heightening these flayed emotions is the strident presence of classical music in the café, explained as the unseen owner’s preference. This lush Schubert, Wagner, and Pachelbel could be read as cynical irony or earnest romanticism, but the winking way it floods the soundtrack is Hong at his trickster best. Does the wall-to-wall music express Areum’s own feelings? Areum does leave the café in one sequence, and it is then that we can glimpse her interactions with others, outside her filmic purpose as an all-seeing eye. She lunches with her brother to meet his potential fiancée, a writer turned stewardess, but soon excoriates the pair for their naiveté in matters of love—a sudden shift that echoes Kim Min-hee’s prickly performance in last year’s On the Beach at Night Alone, in which she drunkenly accuses her friends of being incapable of love. We have no sense of why she does this: is she cynical or merely protective?

Despite its intense emotional flights, Grass does build toward a moment of connection (a sentiment that Hotel by the River stifles). Areum strolls to her cosseted corner in the café, another table invites her for a sip of bagged soju, and the film ends. The writer is finished. After happiness, there is nothing more to add. Areum’s voiceover adopts a sentimental hush: “In the end, people are emotions. Emotions are gullible and forceful, precious, cheap and alluring.” For Hong Sang-soo, a gesture as mundane as sharing a table can propel cinema.