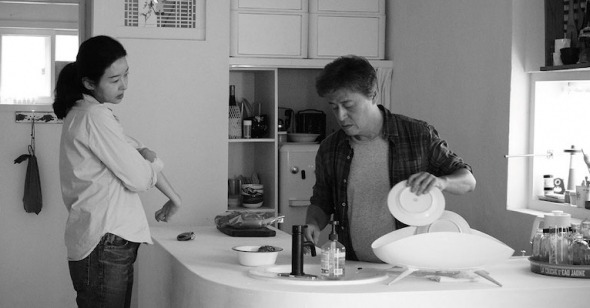 This Must Be the Place
By Ryan Swen

As much as communal drinking, playful structural experiments, and zooms, Hong Sang-soo has long relied upon the familiarity of spaces. Besides the selection of his actors, which in recent years has increasingly revolved around repertory players like Kim Min-hee, Kwon Hae-hyo, and Lee Hye-young, location scouting is one of the few major parts of his preproduction process. A few weeks before the shoot, he asks various cafés, bars, and other desired locations if he can film there, leaving such afterthoughts as narrative and dialogue to the day each scene is shot.

While other Hong films have used places as anchoring devices, returning to them over and over to ground the viewer amidst confounding narrative gambits, none of them have been so overtly dedicated to this conceit as Walk Up, his second film of 2022. The space here is a walk-up apartment building with four floors and a basement owned by interior designer Ms. Kim (Lee), which filmmaker Byung-soo (Kwon) tours during the first of the film’s four parts. The first and second floors are occupied by Sun-hee (Song Seon-mi), a restaurateur; the third by a couple; the fourth by a reclusive male artist; and the basement is designated as a workspace for Kim, even though she spends little time there.

Throughout each of the four parts, this fundamental configuration stays the same, but the people who embody these archetypes change dramatically. As separated by an indeterminate amount of time, the four days depicted in Walk Up gradually trace vast changes in Byung-soo’s life over what might be a few months, a year, a decade, or even—in keeping with Hong’s penchant for repetition—across alternate realities.

This sense of slippage isn’t new to Hong’s work, but Walk Up’s willingness to downplay repetition in favor of a seemingly linear progression of events means that the fuzzy temporal links are more subterranean and trickier to parse than in any of his prior films. To accentuate this variability, each part opens with Byung-soo in a different circumstance. For example, the first finds him visiting the building with his estranged daughter Jeong-su (Park Mi-so). It is the first time he has seen either his daughter or Kim in a number of years, and that initial awkwardness seems to build until it is abruptly broken by the apartment tour, a physical activity to provide anything else to talk about.

Walk Up is deceptively withholding in this initial tour, even as it clearly establishes the spaces that Byung-soo will occupy in the following parts. The second floor of the restaurant, reserved for cooking classes and special customers, is only glimpsed through a curtained window. Eccentricities abound, each little detail latching itself onto the viewer’s mind: the tenants’ propensity for leaving their doors unlocked, the Bressonian view of shoes on the stairs (an image that makes great use of the plot and set’s structural verticality), the sight of Byung-soo surrounded by the fourth-floor painter’s scattered belongings. Crucially, none of these inhabitants is seen or named, left as abstractions for one to fill in based on solely on secondhand information.

These absences form one of Walk Up’s most enriching and complex conceits. Much of the film is given over to conversations about people not on-screen, forcing the viewer to triangulate their view of a character between past and future scenes and what is said about them out of earshot. For instance, Jeong-su and Jules (Shin Seok-ho), an employee of some sort in the apartment building, have a conversation about Ms. Kim immediately after the tour finishes, where the young man’s characterization of his employer runs largely counter to the viewer’s perception of her at this moment. To complicate things even further, it is totally unclear whether the two older adults remain on the rooftop during this scene, or if they’re already in the basement that serves as the location for the rest of the first part. Such little disruptions of equilibrium come to accrue a great force that ambiguously culminates in one of the deftest sleights of hand by any filmmaker in recent memory.

To say too much about the turns taken by Walk Up would be to deny the enjoyment of following Hong on his winding paths of exploration. But one thing can be said without further elaboration: this is perhaps Hong’s most haunting film, which captures the drudgery of life despite such different circumstances from part to part. Whether romantic entanglements, familial troubles, or monetary issues, these anchors remain doggedly attached to Byung-soo. After all, in such a compact building, walking up can feel a lot like standing still.