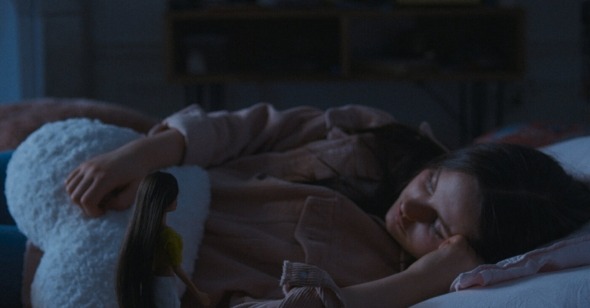 Coma, Bertrand Bonello’s tenth feature film, belongs to the rather inauspicious genre of the pandemic movie. Running just 80 minutes, it bears all the marks of a lean, minimal production. It features only two main actors: Louise Labèque as an unnamed teenager (credited as Young Girl) and Julia Faure as Patricia Coma, a video influencer whom Labeque’s character follows. It keeps to a few spare interiors—mainly the girl’s bedroom—justified by an in-film reference to lockdown measures. It also makes ample use of archival footage, including an extract from a lecture by French philosopher Gilles Deleuze, a shimmering snippet from Henri-Georges Clouzot’s Inferno (2009), and the harrowing finale of Bonello’s own Nocturama (2016). Coma in fact opens with footage from the latter, accompanied by on-screen text bearing a message from Bonello, dedicating the film to his 18-year-old daughter, Anna. Very quickly, though, the film spirals into something stranger and far more uneasy than such descriptions might suggest, stranding us more completely in a nightmare from which its main character has yet to awake.

When first introduced, Labèque’s teen is on her laptop, typing out an email that starts, “This will be my punishment and I must bear it alone.” We never learn who she had planned to send this cryptic message to. In any case, she promptly deletes the draft and switches tabs to Patricia Coma’s webpage, introduced by its host as “a channel to help you live better.” As is probably the case with most social media influencers, Coma’s channel is a jarring amalgam of material: quotes from the Romanian philosopher Emil Cioran; how-to lessons in making “hot soups that stay raw”; and a recurring weather segment that shows temperatures up to 71 degrees Celsius and invariably concludes with a reminder that “You can’t go out anyway, so never mind.” Arguably the most important aspect of Coma’s channel, though, is her unwavering belief in humanity’s lack of free will. This deterministic worldview is exemplified in a small toy called a “revelator”—sold exclusively on Coma’s website, naturally—composed of four colored squares which emit increasingly difficult patterns that the user must match, much like the popular game Simon. Labèque plays with her own “revelator” throughout the film, discovering exactly what Coma predicts: that no matter what choice she makes, she cannot seem to lose. This of course makes her wonder whether she has the capacity to choose or if she can only watch the inevitable unfold.

Indeed, all Labèque’s character seems to do throughout the film is watch. Coma includes multiple aspect ratio changes and shifting video formats, all related to material that she interfaces with. We see a stop-motion soap opera play out with old Barbie dolls in her bedroom dollhouse. We see her dreams about being trapped in a mysterious area in the woods called the “Free Zone.” We see a Zoom call between her and her friends where they discuss which serial killers they find most interesting. In one scene, Labèque’s character even seems to watch herself sleeping. In all this, Bonello’s editing frustrates our ability to cleanly distinguish between observer and observed. Spatial relations between frames are always partial and restricted; eyelines link up strangely from shot to shot. The cumulative effect is similar to what one of the girl’s friends observes about Zoom calls: that “no one knows who’s watching who.”

Including Bonello’s opening dedication, Coma comprises at least four distinct “layers”: the scenes centered on Labèque in her bedroom, the videos from Patricia Coma’s channel, and the dollhouse soap opera. And while Labèque’s character is initially at the center of it all, other links start to form. Sound and music echo between different layers, as when a laugh track previously associated with the soap opera intrudes in a space where Coma is recording a segment. Spaces likewise interchange, as when Labèque exits her room and ends up in a kitchen from one of Coma’s videos; or when Coma sits in a theater watching a projection of the Zoom call between Labèque’s teen and her friends. Even reality starts to bleed through—first absurdly, when one of the male dolls starts reciting Trump tweets; then ominously, when we see security camera footage of Labèque going out onto a Parisian street, accompanied by disembodied voices (speaking in English) surveilling her movements. To quote a lyric from singer Bonnie Banane, whom Labèque’s character encounters in one of her dreams: “Quelle mise en scène / Mise en abyme Éternelle.”

What is most striking about Coma’s dizzying mise-en-abyme is that it annihilates our usual sense of temporal succession, of past, present, and future flowing in an uninterrupted stream of time. It has become a cliché to observe that the pandemic lockdown seemed to unfold in zero time, as if we were all suddenly forced to add another calendar year to our consciousness. With Coma, Bonello takes this sense of unreality seriously, asking what it would look like for a film to take place in a kind of empty time? In his recent films, he has continually explored the relationship between modernity and temporality: think of how House of Pleasures’ portrait of a fin de siècle Parisian brothel shifts, in its final moments, to the sight of the same women wandering the streets of present-day Paris; or of how Nocturama’s explosive first half, which moves with the clockwork precision of a heist film, transitions to the confines of a Parisian department store, suspending our sense of temporal succession. “It was bound to happen, right?” a passerby remarks in Nocturama, gesturing to the larger historical cycle into which its happenings might fit. In a crucial sense, though, Bonello is not really interested in causes or effects—neither in the why of an occurrence nor in the what of its aftermath. Rather, he is concerned with those dimensions of an event that cannot be reduced to material, causal relations. In Coma, as elsewhere, Bonello is trying to reveal a form of time inside the event, so to speak, piling layers upon layers to suspend us more fully in the limbo of the present.

If Coma is a superlative pandemic movie, it is because Bonello presents the “no time” of COVID as a discombobulating simultaneity of presents—the film’s different “layers” all implicated with each other. It creates the impression of the same event playing out in different, incompatible versions which nonetheless interpenetrate and reflect each other. Early in the film, we see a clip of French philosopher Gilles Deleuze saying, “Beware of others’ dreaming, because if you’re caught in it, you’re finished. Never get caught in another’s dream.” The question Coma raises, then, is akin to the one David Lynch offers us in Twin Peaks: “Who is the dreamer?” As Bonello’s framings and re-framings continually invert our sense of inside and outside, figure and ground, dreamer and dreamed, Coma challenges us to make sense of things, to institute order onto what we are witnessing. And failing to do so, we face the terror of being trapped in another’s dream.

In Coma’s final passage, Bonello addresses another message to his daughter Anna, this time accompanied by images of natural destruction: avalanches, bush fires, forests gone up in smoke, melting ice caps, and so forth. In bracketing the film off in this way, he reinforces his authorship of the film—his role as its dreamer, so to speak. There is something discomfiting about this, particularly given his constant reference to “a new day” and “rebirth” accompanied by images of climate catastrophe. Given the context of the film, and Patricia Coma’s stream of pseudo-advice, there is good reason not to take this finale at face value. Then again, if Bonello’s films have sometimes given me pause, it is precisely because they have little to say about the future. But while this is indeed a limitation, it is also the source of his originality in exploring the present: the way he reveals the incompatible layers contained in one inexplicable event. And if his films can sometimes seem indifferent about what comes after, it is because they are ultimately concerned with showing one thing and one thing only: that we cannot think the whole of the event. This is not to deny efforts to reckon with the moment we live in, but to say that so long as we think we can give a total image of the present, we are perhaps not yet thinking. In placing us so fully within the complexities of the COVID-era present, Coma reveals our very inability to unify it in thought. Like Antonin Artaud, who credited cinema with the ability to reveal a “dissociative force” in thought, Bonello demonstrates not the power of thought, but its impower. It is only in realizing this that we might, finally, wake up.