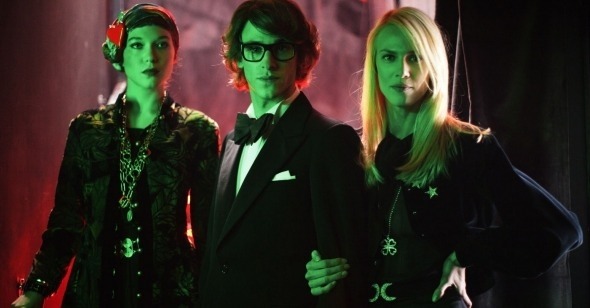 Night and Day
by Farihah Zaman

Despite its literal, bold title, Saint Laurent is hardly a straightforward film. Director Bertrand Bonello (House of Pleasures) takes a gently experimental approach, in both structure and style, to his subject, one of the most famous fashion designers in history, self-consciously but successfully subverting the tropes of the biographical drama. First, there is the highly specific time frame, a single decade in the life of Yves Saint Laurent, played by Gaspard Ulliel. The film is not overly concerned with Saint Laurent‚Äôs childhood or even his rise to fame, nor the moment he met his longtime partner Pierre Berg√©, but begins in 1967, when he is already well known, respected, and on the verge of several major business expansions.

Bonello plays with time and structure even within this framework: the first half of the film moves in simple chronological order, but as Saint Laurent begins to break down emotionally, so too does the film‚Äôs careful construction, entering the subject‚Äôs point of view and moving fluidly through past, present, and future, from childhood memories of helping his mother dress for an evening out, to an eerily quiet existence in later years, up to his death in 2008. Because these scenes make subjective narrative sense, they function not only as texturally satisfying gambits but also serve the deeper purpose of reflecting Saint Laurent‚Äôs internal, emotional state and his personal experience of time and memory.

Such playfulness is deployed throughout Saint Laurent. The film opens, atypically for a biopic, not with the famous‚Äîand famously beautiful‚Äîman himself but with those responsible for executing his vision; the pattern makers, embroiderers, and seamstresses that make up the fashion world‚Äôs ‚Äúdownstairs‚Äù to the designers‚Äô ‚Äúupstairs.‚Äù This is a smart approach for a number of reasons outside of just novelty. First of all, it subtly indicates that this film won‚Äôt simply show the glossy exteriors of Saint Laurent‚Äôs carefully curated world but also the strain and struggle beneath. Second, moving from novice craftsmen to their supervisors to Saint Laurent‚Äôs right-hand man, who escorts the camera into the main character‚Äôs inner sanctum, allows us to enter the subject‚Äôs point of view gradually, working up the chain as he himself might have done before the point in history when the movie begins. By the time Saint Laurent is introduced, his name has already been mentioned half a dozen times in tones of hushed awe, and it‚Äôs understood that he‚Äôs the cool center of this spinning world.

Bonello provides unexpected touches throughout, such as a bold use of music: a mix of nervy pop, retro soul, and the classical that Saint Laurent enjoyed listening to while drawing, disparate genres that set up a clear dichotomy between Saint Laurent the Studio 54-style nightlife impresario and Saint Laurent the intensely private artist. The meticulously stylized, almost otherworldly funk-fueled party sequences are particular triumphs, tableaux that move with either exhilarating freneticism or with slow motion that registers every detail, reminiscent of the glamorous-to-the-point-of-grotesque-and-back-again house party in Breakfast at Tiffany‚Äôs. Through repetition and regular spacing throughout the narrative, these scenes form the spine of the film, with three party sequences each anchored by a moment in which Saint Laurent meets someone who will change his life. First he spots model Betty Catroux (Aymeline Valade) dancing like no one is watching, drawing all the energy in the club to her like a tornado of charisma, then Loulou de la Falaise (L√©a Seydoux), quietly turning Saint Laurent‚Äôs head from the chaos with her eccentric get up and arch confidence, and finally Jacques de Bascher (Louis Garrel), the man he sees across a crowded room and falls for instantly. In these crackling energetic scenes, Saint Laurent is a spectator, absorbing the festivities like a sponge while waiting for the rare magic of human connection. Saint Laurent‚Äôs creative dynamism is a completely internal event; in the outside world he is subdued to the point of passivity.

Bonello also makes some inspired choices that remove the distancing effect that can result from focusing on such a passive character. There is the tiniest gem of a gesture when Saint Laurent is passing through a crowd, takes off his glasses, and immediately the world blurs so the audience can see it the way that he does. Both his own sleek figure and those of the impossibly beautiful people around him become hazy, and the moment of subjectivity brings us emotionally closer to the character. Perhaps he has taken them off because, being such an anxious and fragile man, willing himself to stay calm, to wait, to watch, to manage the jittery intensity of his artistic and romantic passion, he needs to literally soften the hard edges that surround him. Saint Laurent‚Äôs time out in the world and his time cloistered away at work are equally integral to his identity as a man and as a designer, but also draining, and Bonello‚Äôs aesthetic choices, shifting between motion and stasis, between the direct and the subjective, help draw out this constant tension.

The film is impeccably cast and acted, allowing familiar faces of French cinema to dissolve into the story and Bonello‚Äôs overall design. Ulliel does look strikingly like the tan, chiseled designer in his prime, but his simmering, subtle performance does not need to lean on the resemblance. J√©r√©mie Renier, often playing innocuous meathead men, as in Summer Hours and The Kid with a Bike, plays against type here, in an elegant, restrained turn as Pierre Berg√©, Saint Laurent‚Äôs longtime romantic and business partner. Garrel is also given the chance to branch out as Bascher, downplaying the natural puckish quality that marks many of his performances and drawing out his disquieting intensity to the fullest (to give credit where it‚Äôs due, his success is given a significant boost by the kind of mustache usually bestowed upon silent-movie villains). The complicated interactions between these three, however, transcend their individual performances, in part because Bonello neither hides nor sensationalizes Saint Laurent‚Äôs sex life, quickly brushing aside what could be seen as its lack of convention so that the emotion shines through. Saint Laurent is clearly dedicated to, even dependent on, B√©rge but also enjoys dalliances outside the confines of their relationship‚Äîtaking part in colorful orgies in Bascher‚Äôs apartment, cruising building sites and picturesque topiary mazes by moonlight, while Chopin plays on the soundtrack. These scenes are lyrical, unexpectedly romantic, and so matter-of-factly represented that they simply become one of many facets of the subject‚Äôs life rather than a salacious side note. Particularly powerful is a scene in which Berg√© finally confronts Bascher at his apartment, calmly but firmly forcing his way into the latter‚Äôs home, before shutting the door and leaving a conversation unknown to Saint Laurent a mystery to the viewer as well.

The film occasionally overreaches, sometimes because of Bonello‚Äôs insistent departures from biopic convention, as with the use of some flashy but unnecessary split screens. Also the long running time allows for some detours that don‚Äôt add much to the bigger picture, such as a scene in which Saint Laurent compassionately gives leave, money, and reassuring words to a worker who is pregnant out of wedlock, only to later whisper to a manager type that he would rather she didn‚Äôt return, leaving the other man to do the dirty work. What is to be gleaned from this exchange? That he is cowardly or self-loathing? It‚Äôs unclear, and it‚Äôs unproductive to the film‚Äôs trajectory. Nevertheless such moments also reveal that Bonello‚Äôs aim is to create more of a personal experience of his subject‚Äôs life than an external, objective depiction of it; a complex, mercurial existence woven of many threads rather than a succession of events falling, indistinguishably, one after another.