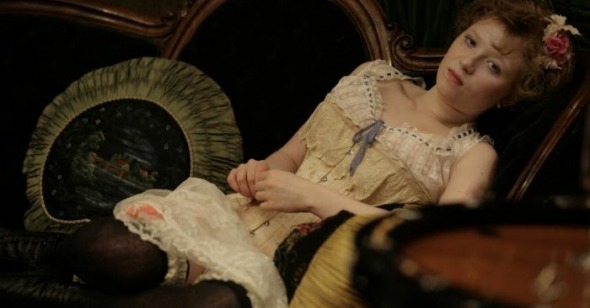 Days of Future Passed
Jordan Cronk on House of Pleasures

Even a cursory glance at our post-millennial cinematic landscape should spark a mental catalogue of our most popular concerns—those of death, decay, and, in light of the medium’s escapist functionality, our total and utter apocalypse. Broadly speaking, these notions help drive, if not completely nurture, mainstream filmmaking. But the reverberations from these preoccupations can be felt across all strata of modern cinema. Budgets may have risen and our collective appetite for destruction may have nearly devoured itself whole, but we remain ever yearning and susceptible to the cinema’s grand displays of emotional terror and physical and psychological paralysis. Whether by choice or out of necessity, many of the world’s best filmmakers examine similar ills on a more intimate, less portentous scale than those in the typical Hollywood model. Bertrand Bonello’s 2011 masterpiece House of Pleasures was itself a minor-scale tremor sent echoing across the world film circuit, a vivid, audacious vision of the incremental degradation of the female spirit and a work, in its own way, as unsettling as anything our modern cataclysmic cinema has given us.

Set in France, within the florid confines of a turn-of-the-20th-century brothel, House of Pleasures bears solemn witness to a profession in the process of incremental upheaval, an age-old custom caught between eras, its methodology rooted firmly in the past as its future encroaches at a rate that makes this vocation feel all but unsustainable in its current form. Bonello sketches his chamber ensemble as a fluid, transitory subculture, as each woman uniquely braces for the inevitable progression of her established role. Hinging on the arrival of a fresh-faced, sixteen-year-old girl (Iliana Zabeth) at the L’Apollonide house of tolerance—an old-fashioned term notable for its contradictory allusions to both resistance and benevolence—the film grants an individualized look at the greater profession’s imminent turn away from deceptive opulence toward a more immediately salacious, dehumanizing utilitarianism. Operating via an antiquated propriety, L’Apollonide appears to have nonetheless thrived as an up-to-now self-sustained enterprise that Bonello arrives at in media res, reimagining the daily grind and routine transactions of these working women. “It hasn’t changed much here. It changes slowly,” the house’s madam (Noémie Lvovsky) admits in one of the film’s earliest scenes. She’s arguably the only character aware of her and her girls’ precarious position, their repression borne not of convenience but of responsibility, and by the end possibly the only one to psychologically endure its (de)evolution.

What’s particularly fascinating about Bonello’s approach to this material is the way he depicts the transient state of the environment, collapsing the temporal boundaries separating the historical, the modern, and the postmodern. This is a film of brave stylistic flourishes and disorienting sensory experience, even as it plays with classic techniques of montage, inter-title division, and subjective first-person reminiscence. Bonello’s detailed, period mise-en-scène further heightens the allure, allowing for liberal mobility between the theatrical, the novelistic, and the cinematic. It’s perhaps no surprise, then, that Bonello, in an interview with Cinema Scope around the time of the film’s premiere, would cite both Quentin Tarantino and Hou Hsiao-hsien as influences. The former seems perhaps the more immediately unlikely of the two to have inspired Bonello’s creative process, though Tarantino has now spent his last handful of films also rewriting history—of both a cultural and cinematic nature—through his own idiosyncratic logic. Bonello’s presentation may be less crass, but the principles behind the approach ring in accord. (One should also mention an overlapping spirit of vengeance, which acts as a catalyst in both directors’ recent work; Bonello specifically references Death Proof as an inspiration).

It’s Hou’s Flowers of Shanghai, however, that stands as House of Pleasures’ most overt predecessor. Though a much more stately vision of an antiquated form of sexual companionship, Hou’s film, with its drifting, long-take cinematography, carefully modulated blocking, and undercurrents of malevolence, nonetheless plays as spiritual, aesthetic, and thematic guide for much of what Bonello attempts to expand upon with House of Pleasures. The meditative, fever dream sensuality of Flowers of Shanghai, however, is replaced here by a mournful, nightmarish carnality, a series of intimate encounters rendered as a passionless procession of fetish and confession, taken to near-psychedelic lengths by Bonello’s elliptical montage and anachronistic music cues. In the film’s show-stopping centerpiece, a laconic interlude is transformed into an apparitional waltz, the wayward souls of these women sent swaying across the ornate maison, futile to resistance, seemingly entranced by the brave diegetic use of the Moody Blues’s symphonic-rock classic “Nights in White Satin.” It’s an audacious authorial stroke, a mournful interstitial turned frighteningly palpable, the attendant impression of hallucinatory rapture boiling over in a manner both grave and white-hot to the senses.

“If we don’t burn, how will the night be lit?” one chillingly prophetic prostitute opines as the flames lightening the house’s winding corridors begin to wane and Bonello’s cyclical narrative reveals a far more distressing nature. This rhetorical question ushers in one last startling sequence, a sort of visual synopsis of the film’s thesis, as Bonello jumps from the horrific recollection of an earlier, violent act of misogyny to a shocking manifestation of previously implied sexual vengeance to a final, disorienting cut to modern day France, captured on digital video and shot roadside, vérité style, in stark contrast to the plush interiors of L’Apollonide. The only equivalent narrative and aesthetic jump in contemporary cinema that comes to mind is Abbas Kiarostami’s similar move to low-grade video for the epilogue to his Taste of Cherry. And just as Bonello’s greater stylistic schema nods toward Hou while wisely embellishing with personalized hues, so too does the narrative break seemingly gesture at Kiarostami by removing the viewer from the drama and dropping them into a present-day realism.

However, Bonello utilizes this jarring maneuver not to alleviate some of the oppressing finality of his parable, as Kiarostami had, but as a device to reiterate the recurring and eternal plight of his characters, as well as that of a profession that may have lost some of its luxuriousness as it’s moved further from the public eye, but nonetheless continues to paint its practitioners as social outcasts. Bonello both sanctifies and sacrifices these women while recognizing the conditions that have bred and nurtured such a habitual cycle of personal necessity and professional entrapment, and ultimately implicates a universal culture that superficially decries prostitution while nefariously indulging in its convenience. With House of Pleasures, Bonello designs an intoxicating artifice, managing to maintain a severity in judgment while looking to the past in hope (however futile) of rewriting the future of both a medium and an occupation, each prone to and sustained by destruction.