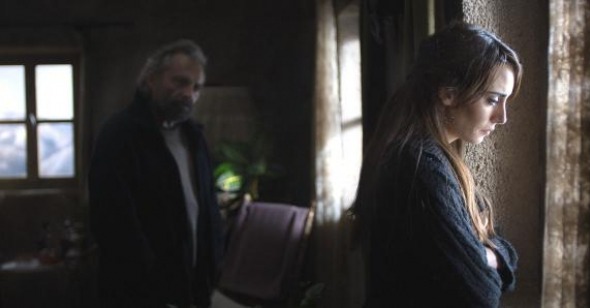 The 2014 Cannes Film Festival main competition slate thus far has been gratifying in its topical and stylistic breadth— and pleasing in its attendant refusal to cohere around any clear motifs that might be further reduced by critics in search of subjective shorthand. For example, two titles that confirm such notions, for better or worse, are Mike Leigh’s Mr. Turner and Bertrand Bonello’s Saint Laurent. Both are biopics, but despite the fact that they’re dedicated to the strictures of this particular mode of storytelling, in many ways they couldn’t be more different.

Bonello’s follow-up to his bracingly confident international 2011 breakthrough House of Pleasures, Saint Laurent depicts in mundane detail a ten-year span in the life and career of the eponymous fashion designer. Bonello continues to excel in stylistic fearlessness, and despite its reliance on biopic conventions Saint Laurent is appropriately gaudy and vibrant in presentation. The world of neon nightclubs, glittering runways, and all-night pill parties is here a canvas to facilitate Bonello’s visual and aural wonders. Not the most naturally charismatic of figures, Laurent would seemingly benefit from such lavish aesthetic embellishments. And a number of moments, particularly an early dance sequence set to the sounds of Creedence Clearwater Revival and a literal split-screen between a fashion show and images of concurrent political upheaval, are infectious in their cinematic indulgence.

If the film suffers from anything other than its commonplace narrative arc, it’s in its fascination with the interstitial moments of the man’s life. This kind of dedication to the banality of celebrity living can be appealing, even without such formal fireworks, when the figure in question at least sometimes takes part in extreme pleasures, such as in Gus Van Sant’s Last Days. But no such internal drama appears to have been present in Laurent’s life, at least in Bonello’s telling. Besides being addicted to prescription medication, the most potentially intriguing dimension of Laurent’s life was his conflicted expression of his sexuality, and yet the film only intermittently engages with his emotional, let alone carnal, interests, instead settling into a displaced perspective in its latter stretch where an elder Laurent reminisces solemnly about a life lived successfully, if, in the end, not quite satisfyingly.

Much more attuned to the pleasures of the flesh is Mr. Turner, based on the life of the legendary Romantic landscape artist J.M.W. Turner, whose personal life was far more lasciviousness than his art implies. For a majority of the film, Turner (played to hilt by Timothy Spall) is seen grunting his way through labyrinthine interiors and CGI-enhanced landscapes, having his way with his housemaid (a standout Dorothy Atkinson), and just generally ignoring the better points of hygiene and discretion when not otherwise water-coloring masterpieces. It’s not a flattering portrayal, and the film feels noble in its refusal to glorify this man. But with its perfectly linear trajectory, and the more mannered dialogue (at least compared to Leigh’s other films, with their roots in improvisation), the film lumbers along like its protagonist, single-minded and exhausting. Such traits reduce the emotional affect of the film’s most impressive features, particularly the ornate art direction and ravishing cinematography, by which in their simultaneously detailed and lavish ornamentation, are something to behold in motion. In fact, Mr. Turner may be Leigh’s most technically accomplished film to date, but one unfortunately sapped of lasting effect by its antihero’s heaving disposition.

It’s worth mentioning here that across the Croisette, at this year’s Directors’ Fortnight section, Turner received a very different kind of recognition from journeyman documentarian Frederick Wiseman, whose newest work, National Gallery, attempts to visually archive the personage, personnel, and painters associated with the titular London art museum. Like all of Wiseman’s work, National Gallery is observational nonfiction, and it captures the everyday activities of the Gallery without extraneous commentary. At nearly three hours in length, the film takes its time. Wiseman here works on (at least) two levels, constructing both a catalogue of artists (which also include George Stubbs, Giovanni Bellini, Peter Paul Rubens, Leonardo Da Vinci, and many others) and their paintings, as well as the faces of assembled patrons. Via these figures both living and dead he traces a kind of taxonomy of the institution. Set-ups shift from simple medium shots of the artwork to exacting close-ups, from hushed confines to the sometimes bustling exteriors—some of Wiseman’s framings of the building’s interior architecture are even reminiscent of the work of structuralist filmmaker Heinz Emigholz in their imposing breadth and incremental detail. National Gallery, then, is less lecture (a charge against some of Wiseman’s recent work) and more discussion, among a multitude of voices both past and present.

Returning to the main competition, there are two unequivocal highlights worth nothing. First, there’s Timbuktu, the newest from Mauritanian filmmaker Abderrahmane Sissako. The dearth of African cinema at the world’s major film festivals has been a talking point over the last decade-plus, but even putting aside matters of production and milieu, Timbuktu would stand on own merits. The film is inspired by a real-life incident in which a young couple was stoned to death when Jihadist fundamentalists learned that they had borne a child out of wedlock, but it ultimately relegates a fictionalized interpretation of this violent act to an ancillary event, positioning it as an unfortunately familiar occurrence in a country overrun with authorial jurisdiction and religious corruption. Instead Timbuktu focuses on the tribulations of married couple Kidane (Ibrahim Ahmed) and Satmia (Toulou Kiki), who lead a quiet life with their two kids before Kidane is jailed when he accidentally kills a neighboring fisherman in a confrontation after the fisherman spears one of the couple’s livestock.

Even while Sissako makes the plight of the family his primary concern, he never dwells too long on any one figure, instead allowing his narrative to encompass a wide swath of the city’s inhabitants. Alongside scenes of Satima and her children awaiting their patriarch’s return, we receive privileged moments with anonymous militia, soccer-playing children, and, most prophetic of all, a town gypsy. Sissako shoots the film in typically unobtrusive style, with his chosen locale’s natural surroundings providing most of the visual interest, seamlessly edited throughout in a classical continuity style to give a traditional sense of drama. Indeed, this may be Sissako’s most classically composed work. There are fewer of those moments of aesthetically derived poeticism that punctuated such Sissako films as 2002’s Waiting for Happiness, and there’s more of an emotional forthrightness facilitated by dialogue and situational tragedy. Even at his most dire, at no point does Kidane ever allow his emotions to override his sense of political conviction or spiritual nobility—a mentality reflected in Sissako’s enduring themes of ideological dedication and perseverance.

The clear main competition highlight of the first wave of titles, however, is Winter Sleep, from Turkish master Nuri Bilge Ceylan. An even denser, more philosophically and emotionally draining experience than his masterpiece Once Upon a Time in Anatolia, Ceylan’s latest, a 196-minute dissection of familial and matrimonial bonds, moves from the dirt-shrouded expanses of the former to a simultaneously vast and suffocating vertical fortress carved into the mountainous Turkish topography. It’s here where we meet Aydin (Haluk Bilgner) and Nihal (Melisa Sözen), a May-December married couple who run the Hotel Othello, which is wedged into the cliffs above the crest of the Anatolian steppes. Aydin’s sister Necla (Demet Akbag) lives with the couple, and in early scenes we watch the three attending to work-related duties when not otherwise mulling about the grounds. Tension mounts and cracks begin to show in the family facade as the winter snow slowly starts to blanket the hovel. Soon buried resentments surface as the two women take turns confronting Aydin about his professional and personal indiscretions.

Ceylan shoots these sequences and, in particular, a pair of extended argument scenes, in his typically patient style. His mastery of editing and crosscutting are on full display here as well, a stark contrast to the generally removed and drifting compositions of Anatolia. Dialogue, which has become an increasingly essential component of Ceylan’s cinema, is likewise utilized to a plentiful degree, eclipsing even his prior film in expository detail. Thus, to the list of influences, including Antonioni and Kiarostami, we can add the always verbal Bergman, who took a similar interest in aging and the disintegration of passion. In the wake of these verbal duels, Aydin considers and eventually takes steps toward leaving for Istanbul, while Nihal begins a journey of her own, away from the strictures of marriage and to a moral reconsideration of her autonomy, which she just as quickly finds is insufficient in the face of male insolence and egoism. One final, seemingly heartfelt gesture on the part of Aydin (and by extension, Ceylan) stings the most: an apparently heartfelt attempt at reconciliation reflected in the expression of a traumatized Nihal as simply further evidence that the psychological storms in this household are far from over.