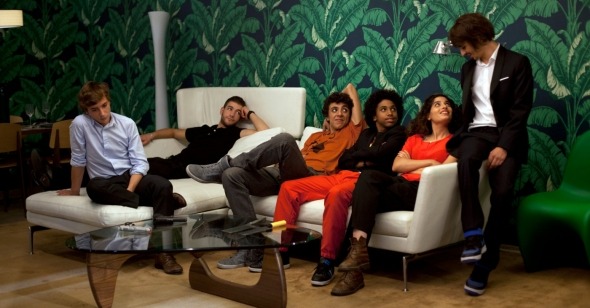 In Bertrand Bonello’s seventh feature, Nocturama, a group of Parisian youths carries out a series of simultaneous attacks on the city—three bombings, the destruction by fire of a gilded Joan of Arc statue, and the assassination of an HSBC executive. Afterwards, the terrorists decamp to a high-end multi-floor magasin, where one of them, a security guard for the store, has made arrangements to hide them for the night, until things calm down. The film doesn’t share the motivations for their actions beyond a couple of vague discussions of capitalist oppression and economic distress. Nor are we made privy to how this unlikely crew, composed near equally of upper crust white university students and poor Arab kids from the banlieues, came together to carry out their actions. We never know for sure if they’ve achieved their goals. And beyond waiting out the night in the store, we’re not sure of their future plans, if they even have them.

In the film’s first half, the filmmaker’s cast of beautifuls criss-crosses Paris, taking and sending photos and texts, picking up and handing off packages, sharing meaningful glances across metro cars, and, eventually, as the sequence nears its end, placing explosive devices at a handful of locations and arming them. Throughout, we understand more that there is a plot than exactly what that plot is to become, or how it has been organized, how the targets relate to each other. As a piece of pure filmmaking, this half of the movie thrills, from the fleetness of the camera, to the little mini-narratives of suspense built into the overall arc of the movement, to the cheeky employment of an on-screen timer that signals for the viewer all the complicated overlaps and doubling-backs built into the edit, to the seductive kosmische burble of the score composed by the director himself. Then the bombs go off.

We first see the explosions in a quartered frame—Bonello has loved to divide his screen into segments at least since 2011’s House of Pleasures—and, later, on fancy television monitors tuned to the news in the store. Yet, in the wake of these acts of violence, the film moves toward something other than a serious realist reckoning with aftermaths and consequences. The bombs hit at precisely 7:15pm (according to a snatch of overheard dialogue, timed thusly so as to kill fewer people), and soon after, the team, down a few in number, assembles inside the massive department store. The members hide in various places until the throngs of patrons are ushered out by security and the city goes on lockdown. Against the unearthly glow of security lights that highlight the proliferation of brands on display—Issey Miyake, Bang and Olufson, Nike, Vitra—they begin to emerge, and a party begins.

What might a bunch of millennials do, sans smartphones, if stuck for an evening in a glamorous shopping mecca? Perhaps they’d play with toys, model fabulous couture, assemble a feast, blast Blondie’s “Call Me” on a massive stereo system, have sex on fancy beds fitted with expensive sheets, touch anything and everything. Yacine (Hamza Meziani) fashions himself into a woman complete with wig and lipstick and performs a show-stopping lip synch to Shirley Bassey’s massive rendition of “My Way.” Several times, Bonello slyly places his characters face to face with doppelgängers—mannequins decked out in identical outfits—suggesting just how porous the divide between those taking part in the system and those rebelling against it can be. At one point, David (Finnegan Oldfield) ventures outside for a cigarette. He traverses the empty streets of Paris alone, young, beautiful, white, and bedecked in an expensive suit. He’s invincible—no authorities are searching for someone who looks like him. He runs across a lovely blonde and asks her about the attacks. It almost seems like a scene from a musical. You half expect them to kiss.

Bonello invites us to luxuriate in the revelry of gorgeous youth, the core concern of so many a filmed entertainment, and the caressing confidence of the filmmaking makes it all the easier to succumb and just join their fun. But…aren’t these youths terrorists? Haven’t they just committed destruction and murder, possibly on a grand scale? How does the filmmaker feel about these characters? It is in the second half of Nocturama that those who believe that realism is the most appropriate tool to investigate the world’s violence might find themselves wondering, if not obsessing, over whether Bonello is taking the piss out of his audience, and to what end. It’s a critical question raised also by a scene in House of Pleasures in which one of his bordello workers weeps tears of cloudy semen. Is Bonello too much? Can he help himself?

Nocturama is up to many things, perhaps including taking the piss, and it’s not always easy to disentangle its aims. Bonello engages in various forms of deck stacking throughout that invite us to inch toward empathy for his characters, as in flashbacks that hint at the downtrodden living conditions of his Arab characters. Yet the mixture of white and brown faces in his cast short circuits an easy reading of them as a collective entity fighting from shared grievances. Past terrorist films like The War Within and Paradise Now (both 2005) exhaustively diagnose the psychology and history of their would-be attackers. Bonello shows his youths playing violent video games, listening to harsh French rap, taking drugs, and dancing like zombies. Are they just bored? Have these kids all been hoodwinked by Gregg, the group’s somewhat older, charismatic leader, the one who furnishes them with explosives, yet disappears before the film’s department store idyll begins? Is there any answer at all?

It has been suggested by French critic Michel Ciment of Positif that what Bonello has done in Nocturama is “irresponsible.” Ciment’s position feels understandable, especially given the intersection of this film and life: production of Nocturama was bookended by the Charlie Hebdo and Bataclan attacks (which led Bonello to change the title of his film from Paris Is a Party), and the film opened in a France likely in a similarly nervous climate to the U.S. after 9/11. A similar mindset, it should be noted, that led the surface-reverent, but deeply exploitative United 93 to achieve near universal acclaim.

Some on this side of the pond have suggested that Bonello’s fantastical liberties, untethered to any literal correlation, negate the value of a maddening, thorny film like Nocturama, a critique that places an implicit straightjacket around art-making. Some subjects are just off limits for treatments that veer from the stolidly real. (When, in fact, it is the cudgel of realism in narrative arts that often makes things go far, far, awry.) In this heated moment, where everyone must choose sides on every topic and loudly broadcast their positions, it seems worth mentioning that my viewing of Nocturama came one day after a cadre of young Americans, many sporting à la mod undercuts and fashionable normcore ensembles banded together with aging racists, human thumbs, and mom’s basement dwellers to cause the death of a young woman in Virginia.

[spoilers ahead] Bonello may avoid easy answers about intentions, may eschew obvious judgment about actions, but he can’t avoid the dire consequences ingrained in his scenario. At Nocturama’s finale, we witness the entrance of the state in the form of black-clad commandos who descend upon the department store in droves. There seem to be an endless number of these faceless soldiers, and they are ruthless, precise, implacable. They kill indiscriminately. The kids are mowed down, one by one, many with their hands raised, clearly hoping they’ll be spared. In death, they all look terribly young. Bonello shows us their ends from multiple angles. We hear shots offscreen only to loop back and see bodies collapse later, reminding of the temporal overlaps of the film’s opening movement. This resistance was crushed, and quickly, and we’ll never know what effect, if any, their aims had on the world at large. They won’t either. Bonello frustrates his viewers again.

To argue that there is immense value in Bonello’s speculative vision of a terrorist act is not to suggest that he has a complete grasp over all of his various strands. As in past films, he seems something of a seer, channeling visions to his audience unsorted, leaving it to us to sift through the morass. His sight is sometimes cloudy. His tastes, as ever, veer toward the grandiose. Perhaps he brings us too close to sympathy for his devils. Perhaps in the early decades of the 21st century, this is an “irresponsible” move. Perhaps as a Frenchman he should have known better than to pick at this particular scab in this particular fashion. But should we really prefer an art that’s primarily focused on what’s responsible? An irresponsible art is a lively, fickle art. Nocturama is a lively, fickle film. It shakes off the cohering impulse of narrative in favor of the sensual appeal of a dreamscape. Many will be left adrift, but that’s a more intriguing, productive result than leaving a theater feeling like you’ve gotten it all.