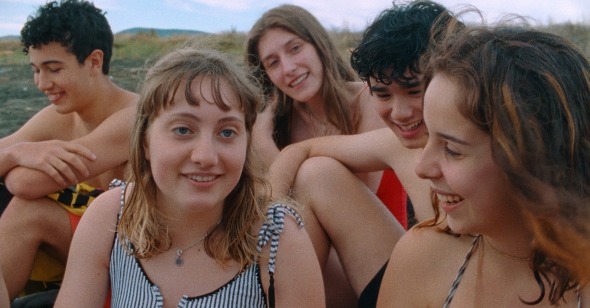 Futura is a tour of Italy from top to bottom, a peripatetic travelogue of places and faces. And what faces they are: acne-spotted, hair dyed, ears pierced—these are youths, those otherworldly creatures who only travel in murmuration. So strange are their beliefs and rituals that Futura functions much like ethnography, seeking understanding by way of a single question: “How do you feel about the future?” The responses reek of teenage heartbreak—they cannot imagine anything worse.

Alice Rohrwacher, Pietro Marcello, and Francesco Munzi have traveled their homeland in search of a national identity. What they discovered instead are the typical anxieties of adolescence. Futura runs for nearly two hours, interviewing hundreds of young people—aged 15 to 20, almost-adults still emerging from their hormonal chrysalides—with little else for respite. It finds a group of friends, asks the same basic questions, offers a brief series of microcosmic cutaways—this village has chickens; this village has boats—and then moves on, to Venice or Milan or wherever comes next. Nowhere along this journey do our directorial wayfarers think to wield their enormous filmmaking talent with any heft, sticking instead to an unfulfilling diet of physiognomy and landscapes, close-ups and wides. This is particularly frustrating when you consider that these filmmakers are responsible for such projects as Happy as Lazzaro, Martin Eden, and Saimir, films concerning youth, belonging, nationalism, history, and the passing of time—all Futura’s major themes.

Futura explicitly positions itself as an archive of contemporary history, tracing the turn of COVID from maskless to masked and back again. (At one point, the pandemic is referred to as being “over.”) Rohrwacher states in voiceover that she and her fellow directors look forward to viewing Futura in 20 years, as if the film is a high school time capsule. Perhaps the directors’ belief that they were capturing something important is the reason Futura so often feels like census-taking. The film is not so much about a moment in time as it is a moment in life, poignant not for its historical specificity, but its generality—the way in which it reveals all young people to be the same. (And certainly, their answers begin to blur together after a while.) Rather than serving the limited function of a relic from the plague years, Futura is most exciting as an encounter with a past self—whether remembered fondly or sooner forgotten. The film’s subjects look forward, its viewers look back, and in this exchange are the pangs of knowing, the aches of nostalgia, that only those who survived adolescence can understand.

All young people are young in the same ways, though this doesn’t mean that Futura’s subjects aren’t unique, either as individuals or as a collective. They are, after all, the generation that will likely live to see the world end—especially if they stay in the Mediterranean. That beatific Italian coast is set for the curse of “water, water, everywhere,” with climate change invoking simultaneous flooding and drought. Wheat and grape yields will crumble; displacement will occur from within and without. Those fleeing disaster from below, from the northern coast of Africa, are likely to seek out a better life, as they already do, in numbers ten- or hundred-fold, which can only exacerbate Europe’s fervent anti-refugeeism. It was a little worrying that nobody in the film mentioned any of this. The kids are disaffected, but not because their planet is dying. When viewing Futura from the future, it will be easy to mistake this teenage torpor for a more profound generational misery, which, in a self-defeating way, sets the film up as an imminent example of historical teleology. (Was COVID really to blame, or just puberty? Did they need to get out of Italy, or just get laid?)

Though Futura’s subjects may be oblivious to the fact that their existentialism is about to become much more material, one encouraging feature of Italy’s Generation Z (what letter comes next, A for Apocalypse?) is their financial pragmatism. If the kids aren’t concerned with ecological collapse, they at least seem affected by an economic one. Having lived the death of neoliberalism, what they want now are jobs—good jobs—which they seem to understand will mean compromising passions and giving up on dreams. (Though there are still plenty of aspiring soccer players.) Sometimes this seems unfair. But on the other hand, why delay disillusionment? Another encouraging sentiment is the desire to give back, with more than a few young people hoping to help their parents or local community. (Awareness of a generational divide fluctuates from person to person: one sequence interviews a Romani girl who rants that her generation is lazy, that their parents had a house, two cars, and two kids at age 20. That they could afford all this while flipping burgers doesn’t seem to factor in.) Economic concerns reign supreme, more than issues of race, gender, or sexuality, which is encouraging, in a way: a young lesbian seems totally indifferent to the possibility of “abuse” or “judgment,” one of the few generational gifts her forebears have passed down.

“Money”—as a concept—comes up at least twice in the film. One kid wants to abolish it altogether, appealing to something like anarcho-primitivism. No gods, no masters, only goats. His friend tells him that it’s a bad idea. They argue; there are lots of hand gestures. Another group of kids push back on the aphorism that money can’t buy happiness. Of course it can, they rightly say. No person who has lived through poverty would claim otherwise.

As the film proceeds, the filmmakers begin to alter their initial question to something more specific. What if you ruled the country? What do you think about love? There is a sense that the directors felt the need to provoke their subjects to encourage a more interesting response. Perhaps handing occasional creative control to the kids would have resulted in a deeper engagement—Futura arrives, after all, at a time when young creators are taking over on TikTok. If you really want to know what young people think about the world, about the future, there you have it: a more personal and personalized camera confessional. You’ll just have to wade through all that weird dancing.