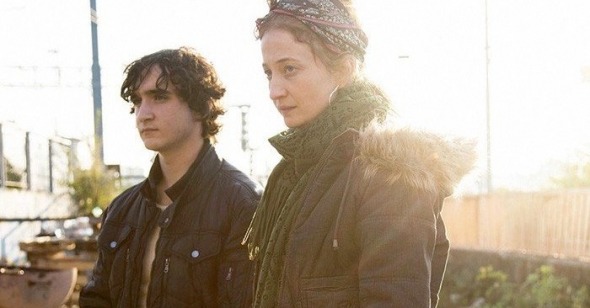 With the dewy, generous eyes and thousand-yard stare of a Renaissance cherub, the teenage Lazzaro, played by neophyte actor Adriano Tardiolo, lives as part of a barely subsisting community of tobacco sharecroppers on a small estate in Italy called Inviolata. Yet he seems somehow to float above his fellow workers. Deprived of money and comfort, the tightly knit group stays in thrall to the members of the vaguely aristocratic Luna clan, who regularly cheat them out of the drippings of money they’re owed on trumped-up technicalities. Lazzaro seems guilelessly unaware of the hardships surrounding him while at the same time functioning as an emblem of them. There’s something about his boundlessly curious look and fixed Mona Lisa smile that gives him an ethereal air, and which makes him an unlikely anchor for a film that—at first at least—seems so otherwise earthy. Yet as Alice Rohrwacher’s Happy as Lazzaro (Lazzaro felice) continues, the film begins to conform to Lazzaro’s rhythms, revealing itself as a gratifyingly tricky, mercurial work of magical realism with one foot firmly in its country’s political cinematic past.

Rohrwarcher, as she proved in her marvelous, fully inhabited previous feature, The Wonders, is singularly talented at situating viewers in textured yet slightly surreal environments, burrowing in with people as they go about their day-to-day routines while also imbuing their world with a capricious make-believe. There’s more than an echo of the Italian neorealism tradition in her films, here felt in the humble naturalism of the shooting, the depiction of the mundane travails of her characters, the haunted glare of its young protagonist (one might recall the passive Domenico from Ermanno Olmi’s Il Posto), and the religious allegory that slowly seeps into the film as it develops. The neorealist movement, after all, varied in mode, containing social melodrama (Bitter Rice) and populist comic fantasy (Miracle in Milan), and all these elements seem to variously reside in her latest film, though Rohrwacher is hardly a filmmaker who concerns herself with mere referentiality. Happy as Lazzaro is entirely its own vision, a deceptively gentle fable that gains in power even as its literal narrative grows more diffuse. In telling her tale of the eternally disenfranchised, Rohrwacher defies standards of storytelling, character, and even time itself.

Working with cinematographer Hélène Louvart, shooting on 16mm, Rohrwacher immediately drops us into what seems like an earlier era, one without technology or any indicators of contemporary living. This might have to do with the deprivation felt by those in the Inviolata community, yet it seems to extend to the costumes, the performance style, the very texture and pacing of life on the estate. Rohrwacher takes pains to never inform us when we are, and even the where is tricky: Inviolata seems both real and storybook, situated amidst the dusty hills and winding, unpaved roads of a mountainous region that feels out of time. As we slowly grow acquainted with the many workers, we come to understand the draconian restrictions put upon them, initially via the drama around the young woman Mariagrazia, who wants to leave Inviolata with her boyfriend Giuseppe, but is told they cannot without permission of the Marchesa de Luna. The drama of these clandestine young lovers soon falls by the wayside, as the film becomes an accumulation of small, imprecise yet tangible details. Nothing feels constant; even the future of Inviolata’s business could be in flux, as there’s nervous talk of the public increasingly quitting smoking, leading one character to fear, “Tobacco isn’t what it used to be.”

In the first half especially, it’s difficult to get one’s historical bearings. Incidentally, there’s another film in this year’s New York Film Festival, Christian Petzold’s Transit, which seems to take place in an intentionally unspecified era, a mini-trend of filmmakers collapsing time that might be indicative of a need to better understand our politically confusing moment and our placement within it. Rohrwacher, for her part, has stated that her film moves from the 1950s to the ’90s and then to our present day, but these shifts are at times barely perceptible and characters’ ages don’t always conform. We must rely on throwaway pieces of information, vehicles, and objects of technology to quietly guide us. It’s surely not incidental that the character we first see wearing headphones, for instance, is the shiftless young Marquis, the princely dyed-blond scion who deigns to hang with Lazzaro. The spoiled brat, named Tancredi (one could be reminded of Alain Delon’s character of the same name in Visconti’s seminal Italian epic The Leopard, the wayward nephew of Burt Lancaster’s Don Fabrizio), comes up with a pointless and half-hearted scheme to kidnap himself and make it seem like Lazzaro did it, even dabbing a faked ransom note with blood. The irony is that his family ignores the letter, presumably tired of what has likely been years of the attention-starved Tancredi’s crying wolf.

Tancredi and Lazzaro’s relationship is like that between a falsely chummy bully and his favorite weakling (in a different setting, the former may have pushed the latter face-first into a locker), yet Lazzaro isn’t merely behaving in thrall to the Lunas’ pathetic offspring. Lazzaro’s passivity goes deeper; perhaps he has some innate, existential comprehension of the world that the rest of us never will quite grasp. Or perhaps his mind is made of pure oatmeal. The first line of the film—“Lazzaro, are you staring into the void?”—speaks directly to his singularity; he either understands everything or nothing. The film never intends to definitively answer whether he’s a saint or a fool or both, but we come to learn there’s something miraculous in his mere existence. And this is a film full of minor miracles: in a recurring gesture, the workers at Inviolata blow air in the general direction of the wealthy landowners who exploit them; initially their only form of tangible resistance, this seems to have an otherworldly effect, as though summoning a spirit. This motif returns in a subtly powerful moment near the end of the film, in which a related group of outcast characters are impolitely escorted during prayer service out of a church by a nun (an authority figure in her way, as well); in seeming response, the music from the church organ quite dramatically escapes from its instrument, following them out into the night, as if borne on the wind.

By this point, Happy as Lazzaro has already made its most radical temporal break, one that has definitively situated the film in the realm of fable and which evokes in its very structure our protagonist’s biblical namesake. When removed from his ostensible place and time, Lazzaro only grows increasingly beatific—his Rip Van Winkle–ish anachronism becomes a supernatural power of sorts. Rohrwacher shows us a contemporary Italy but, crucially, not a transformed one: the class disparities remain and are perhaps starker than ever, most keenly felt in a scene in which a new class of multiracial, largely immigrant laborers line up to bid for factory work. Lazzaro falls in with some of the estate’s former workers, now a roving band of homeless thieves, still barely subsisting but at least not living under the thumb of the Lunas. However, we learn that even the former Inviolata landowners, following severe bank troubles, have fallen into disrepair and dissolution themselves. Despite all this grimness, Rohrwacher’s portrait of widespread economic stagnation is buffeted along its unpredictable narrative path as airily as the music that sails on the wind. And in a final transporting gesture, she confirms that Lazzaro may have always been too pure for the world of humans.