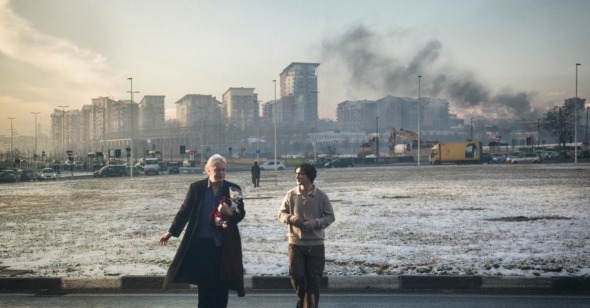 A Giant Leap:
An Interview with Alice Rohrwacher
by Daniel Witkin

“It is not only the obvious and obscure monuments in Italy that create a sense of history; it is also the Italian light and weather,” wrote John Berger in his 1955 consideration of the painter Giorgio Morandi. “In other climates ancient buildings collapse or become overgrown; in Italy the process of aging and erosion is very much slower and purer—barring bombs.” I thought of these lines while watching Happy as Lazzaro, the third feature film by Alice Rohrwacher.

Over the course of her career, Rohrwacher and DP Hélène Louvart have worked a certain alchemy with that light and celluloid, bringing an arresting tactility and brilliance to the screen. As with Berger’s Morandi, there’s a significance to the luminosity of Rohrwacher’s images, a sense that this well-known sunlight falls with equanimity upon the old and the not-yet-old alike. Living heartily on both sides of apparent oppositions—then and now, realism and fable—Lazzaro is the film in which Rohrwacher’s thoughts about time and space get their clearest expression to date. The director kindly discussed her new film with me while in town for its U.S. premiere at the New York Film Festival.

Reverse Shot: I want to start by talking about the past. It’s rare for a movie to deal explicitly with the topic of feudalism, let alone in a more modern context. Obviously, Italy is a country with a tremendously influential history, so I’m curious if you think that the past weighs more heavily on Italy than in other places.

Alice Rohrwacher: In every movie I’ve made, there has always been a conversation with the past. Of course, I come from a region, a country, where time is not so linear. It’s really a mess, in which the times always live together. There is no separation between something that’s 2000 years old and something that’s 12 years old, they are very connected. So we live much more inside time than on the edge of it. The idea of the time as a place is for me very important, something that contains all of the contradictions of the different eras.

RS: I’m interested in this sense of living inside time. How do you express these ideas in cinematic terms?

AR: As human beings, we still have components of our personalities that can be very primitive, but often we use the past as some kind of banner of authenticity. But why should something be more authentic just because it comes from the past? So in all of my movies I have this overlap between past and present. In The Wonders, it was the TV show set in Etruscan times; in Corpo Celeste it was an antique crucifix in a modern church. In this one, I chose a time in the past that was marked more by continuity: the people in Inviolata [the village in Happy as Lazzaro] have lived that way forever and ever. There have been some slight changes, but always in a framework of continuity. And then I wanted to show that there was a passage, but that came through a big break: there was no continuity anymore, there was a drastic rupture. So in terms of my approach to time, in my previous movies there was an overlap before past and present, whereas here I wanted to show an overlap, but also the big break.

RS: At what point in the writing process did the idea for this rupture take form? I’ve read that the film was inspired by an actual story that took place in the 1980s.

AR: The idea for the rupture was there from the start because the movie came to me all together, the way it is now. I wanted to build a classic tale, 20th-century-style, in the first part; and then I wanted to break that and create a 21st-century-style story with an element of continuity, which is the Lazzaro character. The roots of the idea originated a long time ago. When I was a girl, my family moved into an abandoned house. I grew up in that space, which kept talking to me about previous lives, other people’s lives. It represented a way of life that people have abandoned. So growing up, it was natural for me to ask questions and keep wondering why a place that seemed so beautiful to me had been abandoned all of a sudden. And I was wondering why people thought we were weird for moving into a place like that, when actually for centuries people had lived there. So by talking about this, I discovered that many little Inviolatas existed, and that the memory of the past was quite ugly but for reasons that were quite subtle. There was no bloodshed, there was no slavery or chains or whippings; but it was just a case of people who had never had the opportunity to think about their lives, people who could only be permitted to work, and who were kept ignorant because of the privilege of the few. So I just wanted to create a break, and show that after this ended and people were able to break free, there was a true jump in the history of mankind—almost like what happens to Lazzaro. Cinema uses images to convey meanings that history conveys through different means, and this was my cinematic way of more simply synthesizing a path that was bumpy in history.

RS: How did you capture the rupture visually? The contrast between the locations is very striking.

AR: We tried to do the same things we did in the first part in the second part as well. So to create a place that is very real, and at the same moment everywhere, like in fairy tales. So an imagined version of the real countryside, and an imagined version of a real city, but as a child might imagine them. In the first part, we looked for a place that has a very strong connection to the life of the countryside but is somehow abstract, with all these very strange mountains without trees. And in the second part, we were looking for a place that was extraterrestrial, like a spaceship, this cistern where they live. Even in the cities we were looking for something that gave this sensation of being in a fairy tale.

RS: In terms of these contrasts, were you also thinking of the geographic split between the North and South of Italy?

RS: The film is very complex in its treatment of religion, from the services that the Marchesa leads to the apparently honest-to-God miracle that occurs towards the end. I was somewhat surprised when I found out that you come from a fairly non-religious background. That being the case, how did you approach religion?

AR: I think I have a religious mind, but not a religious education and I’m not part of any movement. I believe, for example, in the images, in the human side of things. So I’m not part of any movement, but I really wanted to show two religions in this. Let’s say two spiritual worlds. From one side there is the historical one, the Catholic Church, which is an accomplice of power. And they use this religion to keep the people down, to keep them ignorant. The Marchesa arrives not with bread or with technology, but with a priest. So there is a political point of view. But religion is also the only imagination that the people have. I know these people very well, and they can’t imagine something else. So if they tell you a story, it is, of course, the story of a saint. From the other side, there is another religion. We can say that Lazzaro is a saint from pagan times, from prehistory. This is why he doesn’t do miracles. It’s just a way to be, looking at others as a possibility, not as a friend or an enemy.