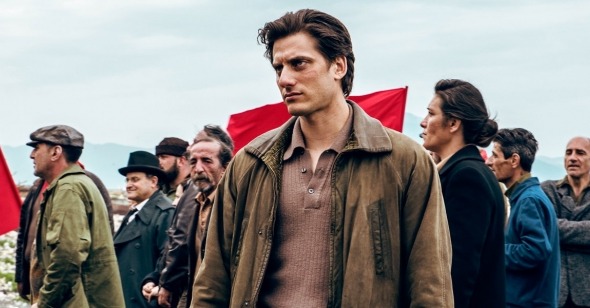 Lost in Time
By Lawrence Garcia

The sailor‚Äôs spirit of adventure courses through Martin Eden, Pietro Marcello‚Äôs vigorous adaptation of Jack London‚Äôs 1909 K√ľnstlerroman‚ÄĒthough the story begins, as perhaps it must, with a return to port. With the fall of night occurs a routine tryst between the eponymous hero (a steely, charismatic Luca Marinelli) and a local waitress named Margherita (Denise Sardisco). But the next morning brings a chance scuffle on the docks and, with it, an unlikely visit to a mansion where Eden has a couple of crucial encounters: the first with Baudelaire, a writer as yet unknown to him (‚ÄúIs he French?‚ÄĚ), and the second with an upper-crust university student named Elena (Jessica Cressy). Both will impel him from his proletarian seafaring origins towards what he later describes as an ‚Äúincessant march through the kingdom of language‚ÄĚ‚ÄĒonly once more will he set sail as one of a nautical crew. But as the recurring, unabashedly symbolic image of an explorer‚Äôs ship suggests, the allure of the sea is potent, and it lingers throughout Eden‚Äôs passage into the long drift of the 20th century.

That last statement is no metaphor. In adapting London‚Äôs novel, Marcello and his screenwriting partner Maurizio Braucci have transposed Eden‚Äôs story from turn-of-the-century Oakland to the coast of Naples, but they‚Äôve also left the question of when intentionally unresolved, indeterminate. The dominant setting seems to be the early to mid-20th century, but discontinuities proliferate. Degraded archival footage of the Italian anarchist Errico Malatesta, who died in 1932, segues into a lilting sequence of nautical work set to the 1979 song "Piccer√®‚ÄĚ; televisions occupy a prominent place in various dwellings, even as ways of life seem more in line with the silent era; the period costuming recalls the very early 20th century, but a poster from the late nineties at one point molders in the background. A longtime passion project for both Marcello and Braucci, Martin Eden maintains a fierce fidelity to the novel‚Äôs spirit, but its sense of time is at every moment unbound.

In refusing temporal fixity, Marcello revivifies the period drama. The film‚Äôs anachronisms bear comparison to those in some of Bertrand Bonello‚Äôs work, particularly House of Pleasures (2011), or, closer to home, Alice Rohrwacher‚Äôs Happy as Lazzaro (2018), though a better analogue might be found in Christian Petzold‚Äôs Anna Seghers adaptation Transit (2018), whose port city setting‚ÄĒMarseille, instead of Naples‚ÄĒis likewise crucial. Whereas Petzold‚Äôs direction often leans to refined restraint, however, Marcello doesn‚Äôt shy away sumptuous decoupage: lush, romantic storytelling gestures, rapturous bursts of Italian pop, and fluid camerawork that seems always in a state of constant reinvention. In an interview with Cinema Scope magazine, Braucci‚ÄĒwho was born in Naples and also co-wrote Abel Ferrara‚Äôs Napoli, Napoli, Napoli (2009)‚ÄĒpoints out Italy‚Äôs lack of maritime literature, and Martin Eden might thus be considered an exploratory foray in that regard. As Martin and Elena‚Äôs mutual attraction blossoms amidst their conspicuous class differences, he resolves to become a writer, and asks her to wait for two years, while he can toil in relative solitude‚ÄĒa promise not so different from that of a sailor‚Äôs wife. Indeed, though there‚Äôs no imminent threat of death in Eden‚Äôs chosen journey, there remains the likelihood that he will eventually sink beneath his own ambition and resolve, never to return.

Trained as a painter at the l‚ÄôAccademia di Belle Arti, Marcello worked for many years as a relatively under-the-radar documentarian. In 2015, his first fiction feature Lost and Beautiful‚ÄĒa folkloric, fable-like m√©lange of v√©rit√© and ethereal evocations‚ÄĒbrought him greater levels of acclaim, introducing more viewers to, especially, his enduring predilection for archival material. (The film‚Äôs title might well serve as a statement of aesthetic preferences.) But if there‚Äôs a feature that best encapsulates Marcello‚Äôs philosophy of style, it is The Silence of PeleŇ°jan (2011). A 52-minute biographical documentary about the Armenian filmmaker Artavazd PeleŇ°jan, it opens with an epigraph that lays out its subject‚Äôs concept of ‚Äúdistance montage,‚ÄĚ which springs from a conviction that the essence of editing is not in joining frames, but in their distances: ‚Äú...The most important thing is that the key elements interact at a distance like charged particles and create an emotional field for the entire film.‚ÄĚ Marcello‚Äôs documentary was titled for PeleŇ°jan‚Äôs literal refusal to speak. But it also highlights a crucial aspect of the Italian director‚Äôs own practice, which is his willingness to engage with the uncooperative, to put himself in dialogue with that which will not, or cannot, speak‚ÄĒexcept, perhaps, through images.

Action at a distance: thus does Marcello place London‚Äôs novel in conversation with an entire century of Italian history, alongside which one might trace the birth of the nation‚Äôs industry, or the broader technological development of cinema itself. The silent-era footage at the start of Martin Eden bears comparison to the opening credits of Terrence Malick‚Äôs Days of Heaven (1978), with its sepia-toned photographs of turn-of-the-century American life, while scenes of Marinelli working a foundry might likewise bring to mind Richard Gere‚Äôs aggrieved Chicago laborer from that film. (One might also recall that London‚Äôs novel becomes a kind of touchstone to a young Noodles in Sergio Leone‚Äôs lustrous 1984 epic Once Upon a Time in America.) Drawing from a range of sources‚ÄĒold clips from his own past films, archival material, and original footage graded to look as such‚ÄĒMarcello assembles uncanny, collage-like forms. In different hands, the film‚Äôs quicksilver shifts of texture and mood‚ÄĒthat is, of an individual‚Äôs sense of his own timeline‚ÄĒcould register as mannered intrusions or obvious, drily academic gestures. But the film‚Äôs robust portrayal of Eden‚Äôs trajectory allows for such ruptures and digressions and curlicues, which open it up in ways unusual for a literary adaptation. In opposing the tendency to privilege contemporary mores and perspectives, Marcello‚Äôs temporal representations might be said to reject presentism in all its forms. Of this, there‚Äôs no more elegant expression than Martin‚Äôs first encounter with Elena, which unfolds from the perspective of an Impressionist painting he was scrutinizing moments before‚ÄĒthe two actors appearing just out of focus, blurring into the room‚Äôs d√©cor and the image‚Äôs rich 16mm grain. In this scene, as in the rest of the film, we look into the past‚ÄĒonly to find it looking back out at us.

Although not a rigorous study in oratory √† la Mike Leigh‚Äôs recent, undervalued Peterloo, Martin Eden nonetheless delineates the role of language in engendering political upheaval. In particular, it portrays the clash between the rising tide of socialism (glimpsed through a series of workers‚Äô rallies) and Eden‚Äôs fierce, selfish individualism (fomented mainly by Herbert Spencer‚Äôs First Principles). Throughout all this, there‚Äôs the stabilizing presence of Russ Brissenden (Carlo Cecchi), a poet who first encourages Eden to abandon his literary ambitions, but who becomes something of a mentor to him. It is Brissenden, himself a committed socialist, who prompts Eden to speak out in protest at a socialist rally, and it is his eventual suicide that occasions the film‚Äôs most decisive turn.

After a scene of drunken despondency, wherein Eden collapses in a field, we leap sometime into the future and find him in a state of Viscontian decadence and decay‚ÄĒno longer the hardy proletarian, with Marinelli‚Äôs hair shockingly bleached, and his teeth blackened in the manner of Helmut Berger‚Äôs eponymous royal in Visconti‚Äôs 1973 opus Ludwig. (This abrupt dissolution of years carries an ache aptly described in Remember Me, David Stacton‚Äôs 1957 historical novel of Ludwig II: ‚ÄúLife burns us away with a fine omnivorous rush, even though subjectively the years are banked.‚ÄĚ) What follows is an unquestionable departure in both cadence and form, in which the relationship between an artist and a wider culture of engagement is most pronounced. With Eden now a literary sensation, this section trades in the propulsive urgency of his upward social climb for a kind of sumptuous stasis, born of the writer‚Äôs self-loathing and ambivalence toward his public success‚ÄĒthe very same feelings that prompted London to first write Martin Eden more than a century earlier.

Because it ties up a number of loose narrative ends with a series of visits from supporting characters, this final, roughly half-hour movement is Martin Eden‚Äôs most obvious concession to its literary origins. It might be considered indicative of a greater failure, or perhaps merely attenuated and politically didactic. But even here, Marcello injects a measure of indeterminacy: by bookending this final chapter with twinned episodes of Eden‚Äôs uncharacteristic mental volatility‚ÄĒa drunken stupor, a fevered delirium‚ÄĒhe explicitly decouples it from the movie‚Äôs dominant drift, thereby confounding temporal, and thus political certainties. Near the end, as Eden watches a version of himself walk along the city‚Äôs boardwalk, one might be inclined to see an aging sybarite looking with regret at a picture of youth and idealism. But if Martin Eden‚Äôs time-based slippages have conveyed anything, we might do well to consider the reverse‚ÄĒthat is, a youthful idealist gripped by the premonition of an unwelcome fate. Resisting the usual dichotomy between ‚Äúnow‚ÄĚ and ‚Äúthen,‚ÄĚ Marcello places both‚ÄĒincongruously, and thus movingly‚ÄĒon the same plane of existence, with neither perspective privileged over the other. Once again, we look back into the past, only to find it returning our gaze.

When we last see Eden, he is sitting on a beach at sunset, and Marinelli‚Äôs hair and teeth have been restored to their original states. A man announces, ‚ÄúThe war has started.‚ÄĚ A group of soldiers mill about near the surf, while Eden stares out to sea, as if poised for yet another adventure‚ÄĒperhaps at the beginning of the century‚Äôs first world war, perhaps at the second. We then cut to the sun hovering over the horizon‚ÄĒan image that, in this film of ceaseless striving and fickle fortunes, must stand in place of the eternal. Although bound by human conceptions of time, Eden must finally face that which remains indifferent to its passage.