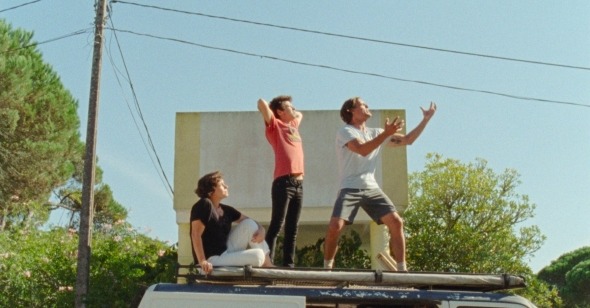 Going Back
By Lawrence Garcia

“What is a film director? A man who’s asked questions about everything. Sometimes he knows the answers.” —Ferrand (François Truffuat) in Day for Night (1973)

For Miguel Gomes, the theory and practice of filmmaking are inseparable. This is not to say that his films are somehow doing critical work—though Gomes did in fact start out as a critic—only that where some directors prefer to dissolve theoretical frameworks into recognizable story arcs and textures, Gomes seems less interested in concealing his interests and themes. Rather, he allows his conceptual designs to rest easy on the surface of his work—perhaps on the assumption that a game is more effectively overturned if its rules are clearly laid out. The “Paradise Lost” and “Paradise” divisions of Tabu (2012), appropriated from the film’s 1931 namesake but presented in reverse order; the fictionalized biographies of his short Redemption (2013); the prefatory artistic statement of the Arabian Nights trilogy (2015), not to mention its “inebriating chorus” of chaffinch facts: these all suggest an artist who sees the world as a vast, interlocking set of intellectual patterns, and for whom filmmaking as a process is an expansive subject in its own right, well worth putting on screen. To paraphrase Truffaut’s terms from Day for Night, Gomes is a director who tends to enfold question, answer, and, especially, non-answer, into his actual films. His latest, The Tsugua Diaries, co-directed with his partner Maureen Fazendeiro, is arguably the most systematic working-out of this tendency.

The film begins in medias res. Dropped in with a title card that reads “Day 22,” we open onto three friends (played by Carloto Cotta, Crista Alfaiate, and João Nunes Monteiro, each referred to by their actual first names) dancing exuberantly to Frankie Valli’s Northern soul track “The Night.” The light outside shifts from green to magenta to blue, its source eventually revealed to be a butterfly habitat in which Carloto finds Crista and João making out. His stricken look suggests an emotional through line for the film—though when the next scene takes us to “Day 21,” with Crista casually broaching the idea of a house party, we are led to expect not the aftermath but the lead-up to this romantic coupling. The film thereby establishes both its reverse-chronology and a seeming pattern of mystery and revelation. But when “Day 19” rolls around, opening onto a scene of Carloto and João playing pool, we hear them not just repeat the exact same dialogue about the party but also trade lines and play the scene twice in succession, as in a theater rehearsal. Neither of them acknowledges that anything strange has occurred, and over the “next” few days, this mystery dissipates into the simple satisfaction of watching the trio methodically (de)construct the outdoor butterfly garden. Discombobulation gives way to the sensuous, textural pleasures of this beloved month of August.

Indeed, this extended passage is so disarming that at the end of “Day 12,” when we glimpse a heretofore unseen woman walk across the frame, it seems to rupture the film. And, in a sense, it does. On “Day 13,” a casual breakfast scene between Crista and Carloto slowly, hilariously expands to include an entire film crew. Later, in an outdoor group meeting that includes Gomes himself, the kiss between Crista and João is recontextualized as a production workaround, the script’s original pairing of Crista and Carloto having been derailed, we learn, by the latter’s decision to break the crew’s COVID bubble and go surfing on their day off. In contrast to the usual telescoping of narrative possibility, then, The Tsugua Diaries may be said to expand from an imaginary, pristine idyll to the unruly disorder of things as they are—from the paradise of fiction to the paradise lost of reality.

Such an assessment, though, would be both inadequate and unsatisfying: it does not resolve Fazendeiro and Gomes’s cinematic riddle so much as just reflect it. Similarly, to call it simply a doc-fiction hybrid is none too illuminating either. Still, larger systematic questions of genre aside, it can be said that despite its protean movements, The Tsugua Diaries displays a consistent attitude towards recognizable forms and conventional cinematic grammar, undermining or overturning them with the uninhibited play of intellectual and humorous observation. Indeed, the film may be said to deal less with people as such than with mental attitudes, a particularly apt approach in the context of a pandemic, where views on safety and illness take precedence over all else. Thus the dramatic interest is less a conflict of character than of ideas, which becomes amply clear when the three principals sit down with their directors to express their reservations about their working method. In this, The Tsugua Diaries recalls Our Beloved Month of August (2008), which after enfolding an incestuous family drama into a record of a region’s musical traditions, finally arrives at a wry reflection on sound recording issues, or the way William Greaves’s Symbiopsychotaxiplasm: Take One (1968), expands from a screen test into an veritable catalogue of competing approaches to life in late-sixties America.

In The Tsugua Diaries, the loose-jointed structures of Gomes’s previous films give way to a strict, albeit discontinuous organizing principle—only to then make ample room for disorder and flux, undermining any sort of teleological progression. The broader context of the pandemic emerges not as social data, but as an intellectual pattern fit for satirical observation: as in an outdoor briefing with a health officer in full, head-to-toe gear, which eventually devolves into an argument about breakfast options. Likewise, despite its metatextual film-set trappings, The Tsugua Diaries has none of the usual drift towards disintegration and collapse as one finds in, say, Truffaut’s aforementioned Day for Night or Fassbinder’s Beware of a Holy Whore. The most direct threat to the production, Carloto’s surfing indiscretion, is dealt with just as we learn of it, then gets swiftly absorbed into the amusingly truncated non-action of the day prior (i.e., the production’s day off), never to be mentioned again.

The effect of all this is to place each day on the same plane, to give each segment an unusual, but welcome autonomy. The emphasis is therefore not on narrative but creative possibility. On one day, in a kind of parody of carpe diem cliché, the three actors are given license to film whatever they want—an opportunity they respond to by improvising a silly, endearing bathtub scene. (“Talk about wasting film,” one of them remarks.) On another, with the pregnant Fazendeiro at a doctor’s appointment, we see Gomes take the opportunity to ride around on the back of a tractor for no apparent reason. So when, late in the film, we finally get a long look at the whiteboard that contains its storyboarded timeline, the moment reads nothing like an “answer” to the film’s riddle, but rather as an invitation to enter an imaginative world that cannot be reduced to either conceptual plan or making-of document.

Truffaut’s definition of a director in Day for Night has much material relevance to the members of a film crew. But for a critic and viewer, it is a reminder that however conspicuously a film may foreground its production onscreen, the work’s context is not “reality” or things as they are, but an imaginative plane that it alone establishes and creates. (To quote literary critic Northrop Frye: “The axiom of criticism must be, not that the poet does not know what he is talking about, but that he cannot talk about what he knows.”) Watching The Tsugua Diaries, we soon realize that any attempt to separate out “reality” and “fiction,” or to ask whether the actors are just “playing themselves,” will eventually collapse in on itself. For the film does not chart a progression from one pole to the other, but lingers, as it were, in the non-answer. So when Frankie Valli’s “The Night” comes round again, in an ecstatic house party that now includes the entire film crew, we find that this film of deliberate reversals is something more like a fable of identity—where every night is the same night, limited only by what our imaginations can conceive.