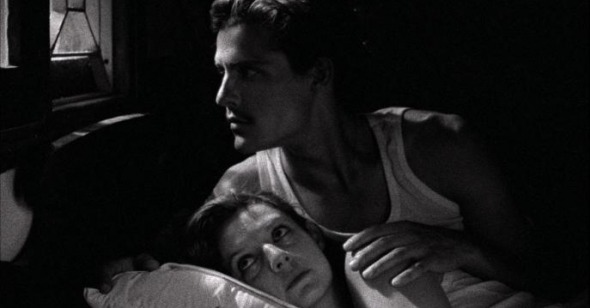 Like the film artist who is perhaps his closest brethren in aesthetic spirit, Thailand’s Apichatpong Weerasethakul, Portuguese filmmaker Miguel Gomes, working on the opposite side of the world, uses the cinematic apparatus to capture, refract or simply conjure out of nothing portions of the fabulous magic lurking at the seams of mundane existence. Both artists remain committed to the sorcery of storytelling, the transmogrification of form, and, perhaps, most importantly, retain the idea that, even amidst wild formal pyrotechnics, movies should still be (gasp) fun. Both are convinced that there is always some combination of image, sound, and story just waiting to be discovered and have, repeatedly through their careers, uncovered it for their audiences. Their films have tickled the festival circuit-set, but not because of their difficulty or opacity. What film lover wouldn’t want to sit down with a delight like Tabu after a day spent slogging through grim Austrian miserablism.

Gomes, even from his earliest shorts (which he’s dubbed musical comedies, though the music is generally piped in rather than sung, the humor dry as a bone, rather than broad) has evinced a willingness to prioritize images over dialogue, songs over the spoken word, and, above all, has maintained a sense of play entirely his own. Thus in the lovely Christmas Inventory, a short faux documentary of a family’s holiday dinner, the filmmaker detours to bring the die-cast figurines of a Nativity Scene to life, while the tripartite Canticle of the Creatures (representative, if such could be said of a filmmaker always in the midst of change) begins as a pseudo music video about Francis of Assisi before switching to a period piece about the saint and then finally evaporates into an abstract nature documentary. His first film to be released in the U.S., the sprawling, unruly Our Beloved Month of August, drifts along, jostling between a documentary about Portuguese summer music festivals intercut with a meta-narrative about a struggling filmmaker that falls into yet another narrative involving musicians previously seen in the documentary portions who have evolved into movie characters. For all of these hijinks, it’s amazing just how grounded and approachable Gomes’s films remain.

Tabu shape-shifts similarly. It begins as a tale of doomed love in the jungles of colonial Africa, only to transform into a realist fable of a lonely woman in present-day Lisbon meddling with her older neighbor’s affairs before looping back into another lengthy Africa-set romantic fantasia that echoes and expands upon the film’s first portion. Tabu’s prologue has the cheeky feel of a Robert Flaherty adventure and follows a melancholic European explorer, in full flight from the ghost of his one true love, who allows himself to be eaten by a crocodile to end his misery. He may have died, but in a wry joke typical of Gomes’s cinema, his love’s spirit now haunts the crocodile, whose visage has now assumed its own melancholic cast. As he did with the roosters observed in the opening of Our Beloved Month of August, and the bestiary of Canticle, Gomes treats his animal characters with the same respect as he does his human ones.

A simple reverse shot to Pilar (Theresa Madruga), sitting in the audience of an empty Lisbon movie theater reveals Gomes’s first ruse—it was all a movie! As the credits unspool, we leave the theater with Pilar, and her story comprises the first of the film’s two large sections dubbed “Paradise Lost.” Contemporary Lisbon, in Gomes’s muted black-and-white photography feels a lonely place, but never in the sense of international art films that lazily allow massive glistening airports and empty concrete plazas to stand in for their characters’ loneliness. We see Pilar in just those kinds of spaces, but Gomes never allows his protagonist to become a generalization. She’s an individual, from her drab, unassuming dress to the tchotchkes in her cluttered apartment. To keep herself busy, she takes an interest in the well-being of her wacky neighbor Aurora (Laura Soveral channeling Gena Rowlands circa Love Streams), who suffers from a gambling problem, medical issues, and the neglect of her daughter. Aurora’s younger self, freshly married and living in an unspecified African colony, is the center of Tabu’s final and longest section (how Gomes transitions here is worth withholding), Paradise, related by Ventura (Henrique Espirito Santo), one of Aurora’s former lovers.

Though this section is narrated from beginning to end by Ventura in a wistful sorrowful mode and none of the dialogue in the tale of Young Aurora and Ventura is spoken, Gomes leaves in the ambient sounds of the story, providing a pleasingly uncanny experience that feels not unlike watching home movies fleshed out by a professional foley artist. (The only words we hear come when Ventura’s rock band performs a Portuguese version of the Ronettes’ “Be My Baby.”) What we learn of young Aurora and Ventura’s twisty, years-running affair casts everything we’ve thought about the louche, borderline Aurora of present day Lisbon in a completely different light. In many of Gomes’s works, a subsidiary character given only a sidelong glance can step forward to completely command the film, here his-reordering of story information results in something like tectonic narrative plates crashing into one another. Young Aurora’s tale also gives Gomes room to further a sly inquiry around colonialism begun in his prologue (notably, in “Paradise Lost,” Aurora’s maid Santa is African as well), but unlike more direct investigations like Denis’s White Material, it’s pleasantly unclear where Gomes’s narrative trickery ends and his politics begin, if the two can be separated at all.

Tabu steals its name and chapter titles from the mystical South Pacific feature directed by F.W. Murnau, another filmmaker in thrall to the magic of movies, and produced by Robert Flaherty, the other guiding pole of Gomes’s cinema. That he’s reversed the trajectory of that earlier film, moving from “Paradise Lost” to “Found” suggests that this new Tabu is up to more than just simple homage. Over the course of just three features Gomes has staked out such clear, singular aesthetic ground, a small miracle given his emergence from in a tiny national cinema already dominated by two big personalities with their own distinct styles (Pedro Costa and Manoel de Oliveira). His works thus far are so wholly different from each other, yet so of a piece that, lovely as Tabu is, it feels unlikely we’ll see anything quite like it from him again. He has said that cinema is a game, and the one he’s playing with us, continually, is of expectation. Wherever he goes next, we all win.