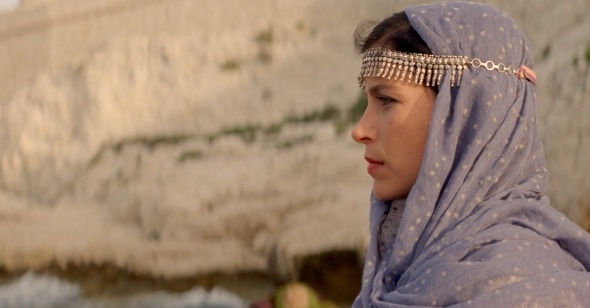 For the People
By Farihah Zaman

How do stories become myths, fables, fairy tales? Is the passage of time required? Does there need to be a sense of long ago and far away? Is it the process of repetition that pushes stories to cultural ubiquity, like the endless international iterations of the Cinderella story? Or is it the inclusion of supernatural events, the magic of the djinn and the genie? In his latest work, the ambitious trilogy Arabian Nights, Miguel Gomes questions the necessity of these factors by mythologizing the quotidian, very recent past: Portugal from 2010 to 2014, when, as each of the film’s three parts informs us at the outset, financial austerity measures resulted in most Portuguese citizens becoming poorer. This simple fact is mind-boggling; one need only imagine the slowly mounting panic as the middle class became the working class and the working class slid toward starving class to see how it could urgently inspire art. It’s in this fragile, chaotic, absurd world that Gomes sets the stories of his trilogy, which include the small-town court trial of a rooster (in Volume 1); the placid suicide pact of a middle-aged couple and subsequent rehousing of their beloved dog (in Volume 2); and the stunning highs and heartbreaking lows of chaffinch breeding, training, and singing competitions (in Volume 3).

The sprawling, three-part, six-hour-plus odyssey borrows both its title and its structure from One Thousand and One Nights, the famous, centuries-old collection of tales of Middle Eastern and South Asian origin, commonly known as the “Arabian Nights” since the first English translation was printed in 1706. The book’s framing device is built around the cunning and brave Scheherazade, able to tame the bloodthirsty King Shahryar, who would murder each new bride the morning after marrying—and bedding—her. She does so by telling him a story every night and shrewdly stopping short at the most critical juncture, such that he has to spare her life in order to find out what happens next. Each night she finishes the story of the evening before but also begins a new one, temporarily reversing the roles of captor and captive. Eventually he genuinely falls in love with his wily wife. In order to keep the story moving and her mad man wanting more, however, she must take a lot of unexpected turns—a series of stories-within-stories, shifting genres, odd detours, elliptical narratives. The result is a thing of structural complexity, at times seemingly postmodern long before the modern even existed. One Thousand and One Nights is a dense, dizzying knot of nested stories that, taken as a whole, is as much an exploration of storytelling as it is a vast catalogue of human nature.

Gomes’s adaptation also explores the nature of stories, both in content and structure, comprised as it is of multiple narrative layers. Although Gomes has explored nested stories, and has layered and mythologized daily events in his other films, such as Tabu and Our Beloved Month of August, Arabian Nights is a far riskier endeavor than previous efforts. It is a trilogy of three standalone films—The Restless One, The Desolate One, and The Enchanted One—in dialogue with one another, but which are themselves comprised of smaller stories that interact playfully, connected but indirectly so. Techniques vary; there may be a shorter story inserted into a longer one, such as the plight of a Chinese emigrant breaking up the aforementioned tale of chaffinches (in Volume 3);or a longer story consisting of smaller ones that link to one another in a chain of causality like the classic poem “The House that Jack Built,” as in the story of a judge tasked with investigating the domino effect of the petty crimes that follow widespread economic woes (in Volume 2). These narrative detours may be presented in a less flashy manner, without leaps in time or place, as when a woman in Volume 2 casually shares with her new neighbor the tale of her former drug addiction, explaining that she only willingly divulged her past because her listener professed a love of hearing stories.

Despite all this fancy footwork, Gomes’s trilogy never feels belabored, because it effectively mimics how conversations occur in life: one story leads to another, which begets another; sometimes the storyteller loses her or his way; some stories dangle precariously with no real resolution, while others conclude with the kind of satisfying neatness that could only seemingly be granted by a higher power. Life gifts us with a diversity of stories, and it is that organized chaos that Gomes seeks to recreate. What at first sounds like a gimmick turns out to be rich in both form and content. These are tales of ordinary people altered or elevated by extraordinary circumstance, and Gomes always reminds us that, as with the original source material, fairy tales are about the working class as often as they are about princes, princesses, and other sundry royalty. The cobblers, bakers, and woodsmen are as beloved by the Brothers Grimm and fellow Western storytellers as sailors, thieves, and servants are to Scheherazade. However where ordinary people in these tales are often made worthy of being in stories by the appearance of the supernatural, Gomes trades in the magic of the everyday; life-changing encounters, tangled webs, coincidences, comeuppances, love and death, fate and chance.

If Gomes focuses largely on the working class, however, it must also be said that he presents a largely white one, which at times feels false to both Portugal’s long history of ethnic diversity and the One Thousand and One Nights tales themselves, which were set in various real-life regions with traditions of trade and migration. There are just enough non-white cameos and bit players in Arabian Nights to suggest the breadth of contemporary Portugal, but they are often extras, appearing briefly to nudge ahead the stories of the protagonists, almost all played by visibly Caucasian or light-skinned actors. (In one case, a black servant to a wealthy young playboy replaces his thinner, light-skinned mistress as a lover because, it is suggested, the latter was unable to bake him an impressive enough cake. While the white lover has a name, a story, a conversation with her mother—in short, personhood—the nameless black servant appears once, baking in near-nudity, and does not speak, particularly egregious because she is one of the few black faces seen in the film.)

An exception to all this is Scheherazade herself, played by Lebanese actress Nicole Saba. By the third film, Scheherazade—who has been present onscreen in the first two volumes only via reverential reference, like some kind of deity—is made real, even comically so. Gomes looks past her extreme situation as enslaved storyteller and into her most mundane thoughts and activities: frivolous love affairs, anxiety over an ailing father, solitary walks along the beach, a general air of malaise. If one of the film’s goals is to bring a sense of import to stories of ordinary people, the time spent with Scheherazade reminds us that those granting the import are likewise ordinary. In featuring Scheherazade as a living, breathing character, Gomes ascribes her a sort of authorship, as did the stories of One Thousand and One Nights, actually written by several different authors over centuries.

At the same time, Gomes subtly demands to be seen as the film’s true Scheherazade. The Restless One opens with an extended documentary-style prologue about the making of the film, epic yet homespun like all of the stories in Arabian Nights. We are presented with the character of the director, obviously a stand-in for Gomes himself, who bumbles though a series of tricky situations and abandons his crew when they are in danger. This one-time device clarifies that the content and purpose of each segment varies as much as the way it is told, from explicitly addressing the financial crisis, as in the tale of two vastly different employees of a social services office—which in turn includes the first-person accounts of three of their clients—to more obliquely evoking universal human experiences, like an adolescent love triangle conducted almost entirely over text (both in Volume 1). Likewise, the gender of the narrator’s voice swings back and forth, male to female, over the course of the trilogy. It’s a rule-breaking touch typical of a film that occasionally indulges in borderline juvenile gags (cabinet ministers sporting incapacitating boners) and anachronistic images (a bard seduces Scheherazade by presenting himself as a struggling break-dancer, the cultural collision of fabled ancient Arabia with 1980s hip-hop making most sense through the shared convention of Hammer pants).

Such jokes and playful moments seem like further attempts to ground a headier, more highbrow form, and return the film to its status as a love letter to the quotidian. This begs an eternal question, however: Arabian Nights may be about Portugal’s working class, but is it ultimately for them or for a cultural elite willing to navigate its conceptual mazes? Ultimately the film’s artistic achievement is too great to be overwhelmed by these issues, however. This film is so big, so confounding in its scope and purpose, and it contains so many contradictions. It is at once affectionate and disdainful of humanity, compassionate and glib, opaque yet relentlessly blunt. Its messy vitality speaks to another reason why Gomes chose as his source material One Thousand and One Nights, in which storytelling is not just a form of entertainment, but literally lifesaving.