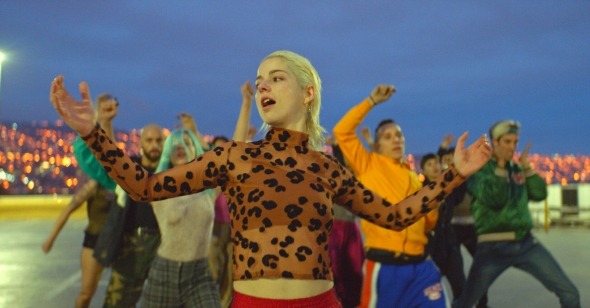 Rage-Dance Against the Machine
by Leonardo Goi

Halfway through Pablo Larraín’s Ema, Gastón—a modern dance choreographer from Valparaiso, Chile, played by Gael García Bernal—faces a mutiny. His company is rehearsing a new piece when a contingent of ballerinas led by his wife, Ema (Mariana Di Girólamo, in her film debut), erupts against what they perceive to be inauthentic. “You’re a tourist,” a girl chides him, “with an imaginary idea of what the calle looks like; you play beautiful music in the port so it looks like Paris.” Of the many insults thrown at Gastón in the film—sobriquets that range from “fucking psycho” to “human condom”—none stings as much as this. The charge speaks to the dilemma Ema orbits around. A hymn to resilience, featuring a young woman singing and dancing for her freedom as mother and artist, the film doubles as an act of reappropriation: of one’s right to a family, of one’s creative expression. Its questions are all rooted in notions of authenticity: what does a real dance look like? What about a real family?

Gastón is twelve years Ema’s senior; unable to give her a son, he’s talked her into adopting one. But the six-year-old they’re given, Polo (Cristián Suárez), proves much more than they can handle. After a series of violent tantrums, the last of which saw him disfigure Ema’s sister in a fire-related accident, the boy is handed back to social services; by the time the film opens, he’s already been assigned to a new couple. Ema and Gastón trudge along as two psychically broken drifters, prone to vitriolic exchanges in which they blame each other for their failures as parents, artists, and adults. “People look at us as if we suffocated a dog with a plastic bag,” she tells him early on. A few minutes in, she’s judged morally unfit and fired from her job teaching dancing at a primary school; moments later, she’s reminded by her mother that “mums should always stay with their children, because children are family; that’s how the world’s always been, and how it should stay.”

Pitted against a patriarchal superstructure that’s marked her as a pariah, Ema finds in dancing her only refuge. Yet she must figure out that dancing is. Whether or not they’re tourist-friendly, Gastón’s performances (designed by choreographer José Luis Vidal and here staged by his own company) are a far cry from the rambunctious, volcanic, and sensual reggaeton numbers Ema and her all-girl posse stage around Valparaiso. She finds no solace in her husband’s abstract, meticulous choreography; for all the burning suns projected on big screens under which the company pirouettes, Gastón’s art feels soulless, a sharp contrast to the unhinged energy Ema embodies as she bounces in the streets to the tunes of composer Nicolas Jaar’s alias, E$tado Unido. Even the songs trumpet the nexus of authenticity and liberation Ema gestures at, the chorus of “Real” crooning “If my body is real, so is my tongue / […] / And if my hunger is real, so is my fight.”

But who or what is Ema fighting against? Having left Gastón for good early into the film and found a new makeshift family in her girlfriends, Ema suddenly catches sight of Polo and his new parents while walking down a pier. The child’s adopted guardians are Raquel (Paola Giannini), a forty-something lawyer who, coincidentally, happens to be handling Ema’s divorce from Gastón, and Aníbal (Santiago Cabrera), a barman and part-time firefighter. Determined to infiltrate the couple and rescue “her” child, Ema resolves to seduce both Raquel and Aníbal, but will keep the triangle secret until a finale of Almodóvar-esque fantasy that calls into question the meaning, size, and shape of a traditional family.

For if the young woman is ostensibly fighting for another chance at motherhood, she’s also struggling to assert her own individuality over and against a system that’s already decided the place she ought to occupy (on stage and at home). Courting, seducing, and sleeping with Raquel and Aníbal, Ema gets to live out a polyamorous mirage in which she can be with everyone yet belong to no one. Her rage swells into a fight between opposing elements. Against the fire hose operated by Aníbal, Larraín hands Ema a flamethrower, with which she roams the streets of Valparaiso, setting fire to objects in the dead of night. There’s a logic to her pyromania. Look carefully at what’s left aflame in her wake: patriarchal monuments (statues and effigies of Chile’s heroes) and symbols of public order (road signs and traffic lights). Ema may not be as explicitly political as Larraín’s No, but pull back a layer beneath the film’s debates around dancing, family, and patriarchy and you may notice the anti-establishment wrath that fueled the mass protests that swept through Chile in late 2019. If not outright prescient, in absorbing some of that generational strife Ema proves all too perspicacious.

It’s telling that the script—penned by Larraín, Guillermo Calderón, and Alejandro Moreno—should define Ema’s relationships with men in terms of symbolic dichotomies: reggaeton vs. modern dance, street vs. stage, fire vs. water. Though these are hardly subtle juxtapositions, they help outline and complicate the power relations its heroine is implicated in: in Nietzschean terms, if the men sauntering through the film act as straightjacketing Apollonian forces, Ema is Dionysus incarnate, all id and impulses. Yet sex and fire aren’t posited as destructive so much as life-affirming, regenerative forces. “People burned trees and then planted new seeds so they could eat,” Ema tells her gang seconds before turning into a wandering arsonist: “Burn in order to sow again.” It may as well be the film’s tagline.

Which leads us back to the mutiny Gastón wrestles with. When I first saw Ema—on the day it premiered at the Venice Film Festival in 2019—I remember being overwhelmed by its nonchalant defiance, its simmering rage, its fulminating visuals. It was only after several re-viewings that the altercation between Gastón and his company began to ring differently for me. Listening to Ema and her girlfriends accuse him of conjuring little more than pretty postcards of the city, of stripping local folklore of all its vitality, I couldn’t help but wonder if the same accusations could be leveled at the film itself.

There’s a lot of clever technique in Ema. Cinematographer Sergio Armstrong trails behind the dancers with a free-floating Steadicam that twirls in sync with them. The rare times the camera isn’t moving, Larraín opts for static shot/reverse shot compositions that frame Ema and Gastón as they talk to each other while looking directly at camera, a choice that gives the exchanges a scolding intimacy. Jaar’s score swells to E$tado Unido’s incendiary beats only to contract in a medley of muted percussions and synths when the action shifts to Gastón’s shows. And it’s all so gorgeous: neon lights pour out of the couple’s crammed apartment and flood the streets below—a palette of pinks, purples, greens, and yellows that turns Valparaiso into a place of nearly extraterrestrial beauty.

Yet despite the film’s sensorial overload, there’s something abstract and distant about Ema, as if part of the fury Larraín invokes died somewhere in the process. Some of this, I suspect, can be chalked up to the way Ema has been written as an archetypal figure, an elemental Mother who cryptically muses about the need to “return to the way things were before.” This is no indictment of Mariana di Girólamo’s performance; she shoulders the film all by herself, her headlong velocity and passion keeping matters engaging even when the script threatens to stagnate. But her turn alone can’t quite dispel the sense that, for all the talk about revolution and liberation, Ema falls short of the revolutionary spirit it preaches. The film posits dancing as a vehicle for freedom; in what’s possibly the most electrifying exchange, Gastón’s beliefs about the sexism and misogyny of reggaeton are debunked by Ema and her friends: that music, they tell him, “is an orgasm that can be danced.” But the film is a case of theory being more gripping than praxis. Visually dazzling as they may be, Ema’s street dances can feel emotionally tidy: beautiful if sterile echoes that only intermittently come to life.