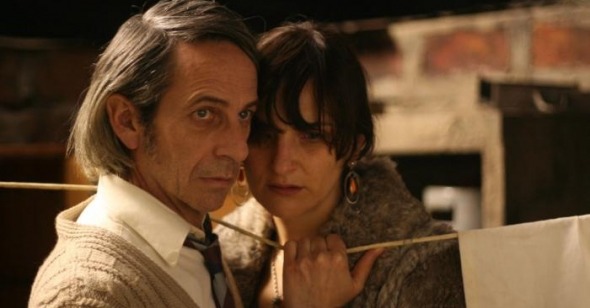 Pablo Larra√≠n‚Äôs Post Mortem pulsates with quiet, murderous passion. In it, the stone-faced yet irresistibly watchable Alfredo Castro is Mario, a middle-aged loner and coroner‚Äôs assistant obsessed with an anorexic cabaret dancer Nancy Puelma, played by Antonia Zegers. While visiting Nancy in her dressing room, Mario overhears the harangues of her manager and offers her a ride home, but his car is stalled by a political demonstration. Larra√≠n frames the story by next showing Nancy‚Äôs naked body, mauve to the point of translucency, on a coroner‚Äôs table. Mario, in his role of assistant, registers the causes of her death as malnutrition and dehydration.

By revealing Nancy‚Äôs demise early on and telling her story in flashbacks, Larra√≠n subtly blurs the line between reality and memory, showing Mario as a man haunted by his nation‚Äôs past, while remaining outside of its politics. What follows is a masterful recap: moments from Nancy and Mario‚Äôs awkward courtship alternate with scenes detailing the examination of cadavers. Mario‚Äôs job might seem prosaic, had the movie not been set in Chile in the 1970s‚ÄĒinspired by the real story of the autopsy of Chilean president Salvador Allende who, after his assassination in a coup of 1973, was replaced by the brutal dictator Augusto Pinochet. Some of the autopsy scenes were shot in the same hospital room where the corpse of Allende had been originally examined. Beyond the accuracy of locations, Larra√≠n also evokes the past by using anamorphic Lomo lenses, made in Russia in the 60s and 70s that give the film a pale color palette of old, faded slides. The muted grays could be a metaphor for Mario himself, a lanky and shadowy everyman, who goes about his inconsequential existence until he falls for Nancy.

Post Mortem‚Äôs political terror builds slowly: the cause of one victim‚Äôs death is determined as having been savagely beaten but cannot be recorded; the chief doctor professes the rise of a ‚Äúnew man‚ÄĚ with fascist piety, as Mario‚Äôs coworkers eat lunch in grim, catatonic silence. Throughout, Mario seems apathetic to his country‚Äôs future. He is a bit of a prig, lecturing his coworker Sandra about the dangers of sleeping with men, and emotionally thwarted, as if his soul were itself a morgue. Larra√≠n clearly intends him to stand in for all those who witness political violence on a daily basis, taking it in as subconsciously as one does air.

Mario rarely betrays any emotion. In one surprising scene, however, we find him weeping inconsolably with Nancy. The cause for their sudden outburst is unclear‚ÄĒfor Nancy, it might be her fading fame and looks; for Mario, a way to show empathy, or an inarticulate cry of alienation. By keeping the characters‚Äô motivations vague, Larra√≠n strengthens the film‚Äôs absurdist tone that only grows stronger as the grotesqueness of the country‚Äôs politics escalates. The tone also has a distancing effect: even though Mario has sex with Nancy, we can never take his passion seriously‚ÄĒor accept it as passion‚ÄĒsince he seems both clinically repressed and out of touch with reality.

But reality creeps back in: during a raid on Nancy‚Äôs home, which has been used for clandestine political meetings, her father is arrested. The terror soon reaches Mario‚Äôs hospital, taken over by the military. In a particularly chilling scene, the soldiers carry in a body to be examined, but neither the nurse nor the doctor can bring themselves to cut it open: the deceased has been identified as Allende, and the military is there to make sure that his murder is falsified, as a suicide. Allende‚Äôs death serves as an invitation for the army to take vengeance on his sympathizers. Cadavers pile up, and those not yet dead are promptly finished off, making any resistance on the part of Mario or the nurses pointless. The grotesque mood is accentuated by Mario‚Äôs existential vacuity: unlike Sandra, his female colleague, he does not voice any protest against the army‚Äôs brutalities, obediently wheeling the heaps of human flesh down the hospital‚Äôs hallways, in scenes that evoke Hannah Arendt‚Äôs ‚Äúbanality of evil.‚ÄĚ But in the end, the nation‚Äôs madness does spill into his own: in hiding, Nancy relies on Mario for protection. But when her activist-boyfriend shows up, Nancy coldly masturbates Mario, in return for favors. Unable to bear the humiliation, Mario blocks her shelter‚Äôs exit.

Post Mortem is only Larra√≠n‚Äôs second feature, but he has already proven a distinct style‚ÄĒan unmistakable deadpan‚ÄĒand an interest in political and personal utopias. In his first film, Tony Manero, amateur dancer Ra√ļl is so obsessed with John Travolta in Saturday Night Fever that he commits multiple murders and forsakes his family in order to adequately transform into him. In both films, political and personal extremes meet: Mario or Ra√ļl‚Äôs unfeeling may be a result of the daily oppression they have internalized, but the characters‚Äô psychological and moral apathy also enables the spread of violence. What makes Larra√≠n‚Äôs antiheroes so beguiling is that they show no awareness of their monstrosity‚ÄĒthey‚Äôre doomed to the purgatory of idiosyncratic delusions that mirror but ultimately transcend history.