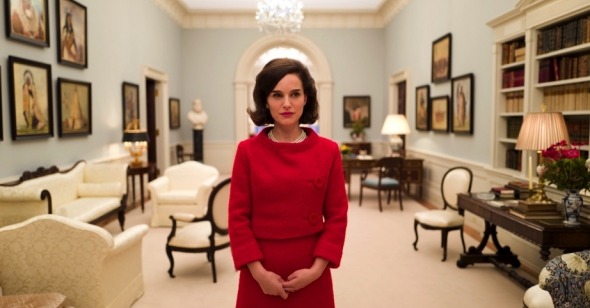 Blast from the Past
By Nick Pinkerton

Filmmaker Pablo Larraín’s international reputation rests on a decade-long run of films prodding at the bugaboos haunting the collective historical imagination of his native Chile. Despite a proclivity for some formal unorthodoxies—shooting on vintage videotape in order to evoke the milieu of late 1980s television in No (2012), for example—Larraín has made character-based narrative films geared toward emotional as well as intellectual engagement, and so is better poised than most to cross over from the “international art house” ghetto to a broader audience. Though Larraín sometimes fails entirely to convince on that emotional level—once his films, however bravura, are over, they have a disturbing tendency to fade rapidly from memory—his talent and intelligence have never really been in question. And then there was Jackie.

Jackie is a fractured biopic snapshot of First Lady Jacqueline Kennedy in bereavement after the assassination of JFK, featuring Natalie Portman in the title role. It is a laborious ordeal of unceasing histrionic assault and gymnastic hysterics, in its way a feminine counterpart to the monotonous masculine trudge of The Revenant, though Jackie has the decency at least to be brief. The movie opens with a Life magazine reporter (Billy Crudup), presumably inspired by Theodore H. White, paying a call on the widow Kennedy in Hyannis Port, where he finds her defiant, combative, and determined to set the record straight on the meaning of her late husband’s legacy. We return periodically to their interview, while under the direction of Jackie’s narration we are shuttled between points in the thousand days of the Kennedy presidency; the events of November 22, 1963; and Jackie’s planning for her husband’s funeral march and interment.

The word “direction” is key, for as the film presents it, Jackie is the curatorial and creative force responsible for our collective idea of what the Kennedy administration was, even feeding the reporter the catchy, nostalgia-laden phrase “Camelot” as a shorthand to refer to the shining ideals and squandered potential of her husband’s unnaturally abbreviated presidency. Jackie punctiliously informs her interlocutor as to which of her recollections will and will not be allowed to see print (“You understand that I will be editing this conversation just in case I don’t say exactly what I mean,” she announces), putting the kibosh on any reference to whistling bullets and splattered brains, while leaving in the glamorous entertainments in the East Room. Prior to the funeral it’s the White House that is Jackie’s principal outlet for her energies, and the film repeatedly revisits the taping of an hour-long CBS News special, A Tour of the White House with Mrs. John F. Kennedy, designed as a sort of public accounting for her extravagant spending in redecorating 1600 Pennsylvania Avenue. These scenes switch between the high-grain color Super 16 in which most of the film is shot, when showing the “backstage” action of television cameras in motion and the off-camera coaching of White House Social Secretary Nancy Tuckerman (Greta Gerwig), and low-resolution black-and-white vintage video to show the mediated image of the First Lady being broadcast into living rooms around the country.

Our idea of the past is intimately attached to the textures stamped onto images of it by the instruments that recorded it—at the most basic level, think of the glow of instant nostalgia conveyed by the hand-tinted photographs or the 8mm home movies which begin, respectively, Cheers and The Wonder Years. Michael Mann flew in the face of such “appropriate” formatting when shooting the 1930s in HD in his Public Enemies (2009), and Larraín’s No calls into question our credulity of it, seamlessly integrating his original footage and archival, “documentary” material. (This places the film on a continuum that includes strange bedfellows like Medium Cool, Zelig, and Forrest Gump.)

Jackie is, much like No, conceived as an inquiry into politics in the age of mass media as a game of imagemaking. In the earlier film, Gael García Bernal’s adman is putting together a TV-friendly pitch for the Chilean public to vote “No” in the 1988 plebiscite, so to hold a democratic election that will take dictator Augusto Pinochet out of power. In Jackie, it’s Mrs. Kennedy who is managing and cementing the image of her husband’s presidency, taking special care with last impressions: the funeral march in open air, modeled after Lincoln’s, and held in defiance to an age of assassins; the location and design of his final resting place. (She opts for Arlington National Cemetery over the family plot, because Brookline isn’t deemed appropriately presidential.)

The rote human interest passages in No—the domestic drama of García Bernal arguing with his estranged radical wife and fretting over the safety of his son—weren’t a fatal liability, ultimately outweighed by the pleasure of watching the backstage drama of public relations gamesmanship. García Bernal’s part isn’t really a star role, and the film retains throughout the sense that his private citizen is a bit player in a larger public drama. (That the drama and the history are novel to a norteamericano viewer is, perhaps, a factor as well.) Jackie, however, offers nowhere to hide from Portman’s Jackie—imperious, tragic, and insufferably mannered.

I haven’t yet seen Larraín and García Bernal’s Neruda, the other half of his diptych of end-of-year experimental biopics, but Jackie offers disturbing evidence of Larraín adapting himself to the needs of Hollywood’s Great (but Flawed) Man (and Woman) historical fiction factory. (That he takes more risks than, say, John Lee Hancock does in The Founder, should not be considered a towering accomplishment.) As the movie begins, Portman is fixed in a traveling close-up, accompanied by composer Mica Levi’s seasick-swoony strings, and throughout we are kept in tight quarters with her Jackie, fixing the reporter (and the camera) with a defiant eye-to-eye stare-down. Darren Aronofsky has a producer credit here, and this is certainly the nearest thing that Portman has had to a virtuoso grand dame part since Black Swan (2010). There are a few other noteworthies on hand—Gerwig, Peter Sarsgaard as RFK, and John Hurt as the family priest, who meets with Jackie to discuss the Mysterious Ways of the Divine next to the Lincoln Memorial Reflecting Pool—but none of them are granted the opportunity to show any glimmer of an individual life, and Portman is very much the entire show here.

She is, I hasten to add, singularly awful, though by virtue of the fact that the actress is attempting an impersonation of a dead celebrity with a highly recognizable speech pattern, she will automatically be catapulted into the awards season frontrunner shortlists, because of a popular tendency to confuse party-trick mimicry with great acting. Portman doesn’t bear much of a physical resemblance to the First Lady, but the technical aspects of her impression are more or less on the money—she gets the unusual cadences of Jackie’s speech, and most of her peculiar combination of boarding school elocution and mishmash mid-Atlantic phrasing, though speaking through her scrim of muzzy breathiness she sometimes strays closer to the pouty baby voice of Marilyn Monroe.

The performance is entirely from the neck up, but in both this and the flourishes of mannered affect it may be said that Larraín and Portman are being true to their subject. The Jackie they’ve given us is a public actor—before touching down in Dallas, for example, we see her practicing a Spanish-language speech before a mirror on Air Force One, like an anxious thesp waiting in the wings. In both the immediate aftermath of her husband’s assassination and in the process of reliving those events for the reporter, she is seen repeatedly breaking down, then shoring up her composure—which is to say, staying in character in the face of insuperable grief and incomprehensible horror. (Larraín gives us some novel views from the backseat of the ’61 Lincoln Continental, though it is a piece of wrongheaded naïveté to imagine that an American public that knows the Zapruder film like the Pledge of Allegiance can be shocked anew by such images, from whatever angle.) But while the Jackie who comes to us in film and videotape knew how to play to a camera, Portman consistently overshoots her target—Larraín works in close while his star plays to the upper decks, offering up a bombardment of shell-shocked stammering, extravagant cigarette sucking, exquisitely arranged thousand-yard stares, and Super Soaker tears. It’s a monotonous procession of hysterical and bereaved poses that wouldn’t be out of place on the Last Girl in a middle-of-the-road horror movie—which, in a sense, is just what Jackie is.

Noah Oppenheim’s screenplay for Jackie began its life as a proposed HBO miniseries around the time of the last upsurge of Kennedy nostalgia that resulted in the renaming of the Triborough Bridge after RFK, Caroline Kennedy’s eyeing of fellow dynastic-politics perennial Hillary Clinton’s New York Senate seat, and the jaw-droppingly awful television miniseries The Kennedys (2001). It was finally revived by Fox Searchlight Pictures, Aronofsky, and Portman—the involvement of each can be explained through a combination of artistic ambition, patriotism, cupidity, and bad taste. Larraín was a late hire, and what he’s brought to the table is the rather slender idea of Jackie as a kind of Mrs. Dalloway-in-mourning, fretting over funeral preparations, as iron-backed as current fashion demands of a Strong Female Lead. Any film on such a well-mined event as the Kennedy assassination requires a deeper personal involvement to redeem it—a movie about the Miracle on the Hudson, for example, has all the makings of a sleepwalk, but because Clint Eastwood invested Sully with a lifetime of thinking and feeling about professional responsibility, that film emerged less like an assignment than a passion project. In Jackie’s solemn, high-toned pontifications about duty and legacy, however, Larraín is drifting dangerously close to the territory of Morten Tyldum and Tom Hooper. There are other legacies he might do better to be worrying about.