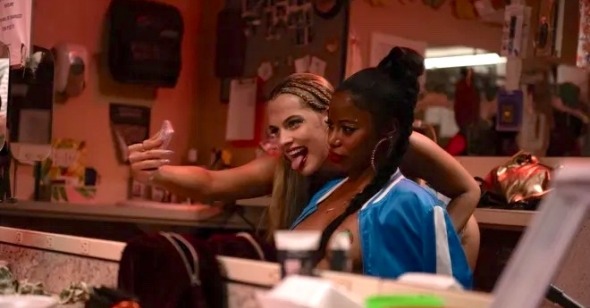 Lost in the Sauce
By Gabrielle Marceau

In the past decade, filmmakers who have sought to say something about “America” have been drawn to the state of Florida, America’s unruly, libidinal id: sweaty, crass, unpredictable, and politically volatile. There was the immersive and dreamy chaos of Spring Breakers (2012) and The Beach Bum (2019), and the Floridian fantasies of Moonlight (2016) and The Florida Project (2017), the latter named after Walt Disney’s unrealized vision of extending Disney World into a fully functioning city, a utopia built on a swamp about 20 minutes outside of Orlando. Janicza Bravo’s Zola is an ambitious entry to the canon that takes us on an odyssey into the belly of the sunshine state.

In 2015, Zola (Twitter handle, @_zolarmoon; real name, A’Ziah King), a Hooters waitress and occasional exotic dancer, traveled to central Florida with three strangers. King’s 148-tweet retelling of the ill-fated trip is thrilling, hilarious, and mostly true, and it became an Internet phenomenon that seemed destined for the big screen. Bravo’s adaptation starts off like the real story: Zola (Taylour Paige) agrees to accompany Stefani Jezowski (Riley Keough), a stripper she met days before, to dance in Tampa. Along with them is Stefani’s hapless boyfriend, Derreck (Nicholas Braun), and her mysterious roommate, X (Colman Domingo)—who, it turns out, is also her pimp. As in many road trips, the convivial air turns quickly into boredom, the memory of a gleeful singalong to Migos’s “Hannah Montana” fades and the mood sours as Stefani tells an increasingly racist rant about a Black stripper. For Zola, the trip to Florida becomes an immersion into a hostile landscape of virulent racism and sex trafficking. Despite what we might expect from her job, Zola is sheltered. After A’Ziah King’s thread went viral, Ava DuVernay tweeted that there is “... so much untapped talent in the hood.” King responded gently that she’s actually from the suburbs. The film undoes this misconception: it’s the white woman who is more attuned to this environment, but Stefani’s whiteness allows her to seem passably naive. When preparing for her johns, she brushes out her braids and dresses up as a Catholic schoolgirl, suddenly stripped of her cartoonish appropriation of Black speech (what Bravo has described as blackface without the makeup).

The characters are constantly changing gears to manipulate, to elude, or to survive; the volatile X switches to an African dialect when eager to intimidate but turns smooth and appeasing when under threat, and Zola herself instantaneously snaps from sweet to hostile. But these shifts sometimes feel more manic than meaningful, not motivated by fear or anger but by the script’s demands. The film is from Zola’s perspective, but her inner world remains opaque to us, closed off, perhaps as a means to protect herself. As a protagonist, Zola is curiously passive, more of a chronicler than an agent of the story. Her languid pole dances aren’t demonstrations of her virtuosity (like in Flashdance), sheer eagerness (à la Elizabeth Berkeley in Showgirls), or even her eroticism; they are simply opportunities for us to observe her body. She watches herself in a Fosse-esque hall of mirrors, seeming less like a performer and more like an image, one she lingers over thoughtfully: “Who you gonna be tonight, Zola?”

A hall of mirrors is a good image for the Internet—and particularly the Internet of hot women. Pictures of both Zola and Stefani are traded, fawned over, monetized, and weaponized. Every time King’s Twitter thread is directly quoted, we hear the telltale Twitter notification chirp (since phased out). This detail is the only time the film gets at the dizzying, intrusive texture of living online. Zola is a film born of the Internet though it doesn’t quite evoke the experience of existing with and within it. Cell phone scenes appear in the frame, but only towards narrative, rather than aesthetic ends, and a scene whose text is sourced from a Reddit is so self-consciously cinematic that it opens with Bravo calling: “Action.” The film did inspire its own viral Twitter meme: Zola’s inciting catchphrase—“Y’all wanna hear a story about how me and this bitch fell out?”—paired with dozens of troubled female duos from cinema’s past.

Surprisingly, Bravo’s film doesn’t address that King’s most thrilling twists, including Jarret’s suicide attempt and shots fired at a rival pimp, were made up. King’s tale reminds me of the Emily Dickinson line: “Tell all the truth but tell it slant.” Her salacious, embellished odyssey carries a truth about the prevalence of sex trafficking in America—but Bravo’s version tells the story straight. Her approach is hypnotic, almost ponderous, employing a stillness and precision that doesn’t quite match the rollicking pleasures of King’s story.

At one point, Stefani watches a video of a woman in a tight dress and heels trying to get her car out of mud, a subgenre of horny YouTube videos (which also includes girls stuck in snow). It reminded me of Samuel L. Jackson watching a girls-and-guns video in Jackie Brown (1997). Both are uncanny mélanges of prurient American imagery, meant to inflame passions and kill time. Bravo looked to blaxploitation films, particularly Pam Grier in Coffy (1973), as a template for her own vision of a Black woman trying to stay a step ahead. In reimagining the blaxploitation vision of a crime-ridden world, she gets to play with stereotypes of Black and white women, indulging in and deconstructing them at once. But her approach to the zeitgeist doesn’t have enough raucous sleaze to make it feel dangerous; the pace is too erratic to fill us with dread, and the frequent wide shots disconnect us from the action. Neither does Zola have the satiric bite of her nihilistic short film Gregory Goes Boom or her truculent debut feature, Lemon.

Nevertheless Bravo—the daughter of two tailors and probably one of the best-dressed directors alive—has an impeccable aesthetic sense. Zola stands out from the other recent Florida films with its chilly, ambient, candy-colored scenes (inky blacks over glittering lavender, indigo, and chartreuse). There are indelible, sometimes haunting images; a quick sequence in the empty, palm tree-filled lobby of a hotel, the inviting excess of a neon-lit liquor store, and a moment when we see a group of cops attacking a Black man, glimpsed through a car window (the image is far away, but the sound is unbearably close). The last moment eerily passes us by, almost ambient, as though such horrors are simply folded into Zola’s world.

The film doesn’t tell the end of Zola’s story: how the white girl and the pimp end up in jail, the long-suffering boyfriend married to someone else, or even how King got home safely to her own boyfriend and went on to executive produce this film. Instead, the film’s ending—X’s black Jeep jetting into the horizon while the credits roll—suggests that the story doesn’t end, that Zola is still trapped on the road trip from hell. It’s a curious closer to a film that has, so far, stayed faithful to its source. It’s also another mythic American image: the hero, alive but burdened by an adventure that will change her, riding off into the sun.