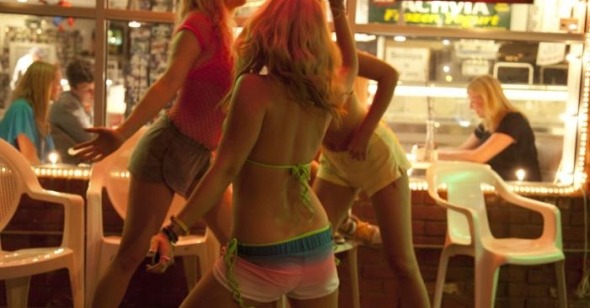 Re-enter the Void
By Michael Koresky

Upon exiting an opening-weekend, multiplex screening of Harmony Korine‚Äôs Spring Breakers, I overheard a late-thirty-something dude in a fedora exclaim to his friend, ‚ÄúIt was so genuine. So unironic.‚ÄĚ My gratitude to him for crystallizing for me the target audience for 40-year-old Korine‚Äôs millennial-MTV-culture snapshot cum gonzo dream ride. Moments earlier, those in the audience who better reflected the demographic seen in the film were occasionally giggling, texting, and mocking, and when the closing credits began to roll, some sarcastically applauded (with one girl loudly proclaiming Selena Gomez deserves a supporting Oscar, while bursting into laughter). Two proper responses, perhaps‚ÄĒwith the younger, a casual, perhaps befuddled and flippant engagement with a film that resembles schlock but positions itself as art; meanwhile, the older, more discriminating responders had been indoctrinated in the media-approved Korine narrative. Surely Korine also believes he‚Äôs created an unironic film, a heartfelt testament to the youthful spirit that still pulsates beneath a culture of excess. And surely fedora guy would tell us his hat is worn unironically too‚ÄĒhe just likes the look of it.

There‚Äôs no evidence that Korine is aiming for irony with Spring Breakers‚ÄĒcontemporary, media-driven culture is so self-reflexive that it‚Äôs hard to tell the difference between earnestness and satire anymore. That ambiguity of meaning fuels Korine‚Äôs film. Spring Breakers is not particularly subversive, save for the publicist‚Äôs-dream presence of former Disney princesses turned bikini-clad, gun-toting revelers who say things like ‚Äúmoney makes my pussy wet.‚ÄĚ There‚Äôs already been a Brooks Barnes New York Times Arts section article about Gomez (Wizards of Waverly Place) and Vanessa Hudgens (High School Musical) shedding the shackles of a career in the Mouse House, along with Ashley Benson of Pretty Little Liars, from the Disney-owned ABC Family network. What the article misses, as do those who see a simplistic good-evil split between ‚Äúindie‚ÄĚ and ‚Äústudio,‚ÄĚ is that Korine is just as much a brand as Disney‚ÄĒjust substitute Shock for Wholesomeness, enfant terrible for infantile.

Aside from the good-girls-gone-bad angle of its conceit (according to Korine, he‚Äôs playing with ‚Äúpop mythology‚ÄĚ), the film is conceptually, and even visually, rather tame. Nevertheless, many critics‚ÄĒwhether we‚Äôre young or desperately want to seem young‚ÄĒare giddy over the film, applauding it for being ‚Äúhallucinatory,‚ÄĚ ‚Äúvisionary‚ÄĚ or ‚Äúsurreal.‚ÄĚ Watching the film, I couldn‚Äôt help but feel a disconnect between the Korine of our collective wishes (the one who‚Äôs our stylish ambassador to self-destructive youth culture) and the Korine onscreen‚ÄĒthe one with the purposely impoverished aesthetic who reifies rather than imaginatively reappropriates that culture in a different, though equally preening, register.

Opening with a perfunctory (intentionally?) hyper-speed montage of sweating female crotches, beer-soaked breasts, and suckled popsicles, Spring Breakers attempts to plunge the viewer into the weird new America, where the young, beautiful, and horny ache to get out from behind their devices and just, like, connect. Thus for its four female college-age protagonists‚ÄĒvaguely inhabited by Gomez, Hudgens, Benson, and Rachel Korine, the director‚Äôs wife‚ÄĒthe prospect of a spring getaway is more than just party nirvana, it‚Äôs a lofty, even spiritual goal. The girls‚Äô mix of directionless aspiration and lethargy is evoked in disconnected scenes: they exchange notes during a class discussion on the Civil Rights movement (‚ÄúI WANT PENIS‚ÄĚ surrounded by a heart shape, and ‚ÄúSPRING BREAK, BITCH‚ÄĚ scrawled over a doodle of an erection), do handstands in grubby dorm hallways, sensually blow pot smoke into each other‚Äôs mouths, and seemingly improvise meandering dialogue while sprawled across a bathroom floor, one of them casually aiming her fingers in the air like a gun. Save Gomez‚Äôs pointedly named Faith, a good girl first seen at a church group preaching about temptation and youth safety, the young women‚Äôs sexual appetites seem knotted up with an underlying death drive. Soon, wielding sledgehammers and water pistols filled with alcohol, they rob a fast-food chicken restaurant to fund their trip to Florida (a silly spectacle safely filmed from the window of the getaway car). ‚ÄúPretend it‚Äôs a video game‚ÄĒact like you‚Äôre in a movie or somethin‚Äô,‚ÄĚ one of them says in prepping for the occasion, a line stated again over the soundtrack‚ÄĒone of many aural repetitions throughout the film‚ÄĒtelegraphing not only the film‚Äôs themes but also its apparent aesthetic mission statement. As Korine stated in an interview: ‚ÄúI wanted it to work in a very physical way, in a way that was more like a video game or a piece of electronic music. In other words, something that‚Äôs just beyond simple articulation.‚ÄĚ

The perspective of Spring Breakers feels a bit too omniscient and scattered for it to truly evoke a video game, and it‚Äôs a bit too visually pedestrian to be the abstract mash-up that Korine, and its fans, seem to want it to be. If the film is at all ‚Äúbeyond simple articulation‚ÄĚ that might be because it has nothing much to say, it just wants to feel. The most daring aspect of the film is that it largely seems to refrain from judging the puerile, sensational, misogynistic, and violent culture that it dramatizes, preferring instead to locate its presumed hidden poetry. Fair enough: for these kids-run-amok, this journey constitutes a search for meaning as much as a cross-country road trip or a walk in the desert. (In case we miss that point, there‚Äôs always a breathy voice-over around the next corner telling us what a ‚Äúspiritual‚ÄĚ journey this is, or that ‚Äúit‚Äôs like paradise here.‚ÄĚ) Yet when a film so intensely immerses itself into the debris of contemporary culture, one might‚ÄĒand should‚ÄĒexpect something more than mere aggressive mindlessness.

At least the four, expressionless, sensation-starved girls create a space we can project on to; James Franco‚Äôs wannabe drug czar Alien (modeled, or perhaps not the actor says, on rapper performance artist Riff Raff), however, seems a dead end. It‚Äôs clear why Franco‚Äôs performance has been wildly acclaimed: Korine lavishes attention on him, and his showboating Alien, a self-conscious white appropriator of black culture, fills the intentional void supplied by the women. He‚Äôs the film‚Äôs only actual character. With his cornrows, maddeningly attenuated Southern drawl, and mouth of gleaming gold teeth, he is also its ultimate fetish commodity. At one point, when showing his decked-out house to the young women (whom he‚Äôs bailed out of prison and therefore made indebted to him), he simply gleefully names things in his bedroom: tanning oil, nun-chucks, knives, pistols and automatic weapons, and, of course, ‚ÄúScarface on repeat!‚ÄĚ We spend a lot of time in Alien‚Äôs company, he‚Äôs a static visual joke‚ÄĒappropriately, later in the film, Korine has him perched at his gaudy, poolside white piano hitting the same note over and over.

The lack of forward motion in Spring Breakers is clearly intentional, as the film feels increasingly like an arrhythmic, circular song on repeat. Once the three remaining girls‚ÄĒFaith, freaked out by Alien‚Äôs (mostly African-American) criminal world, has headed back home‚ÄĒare partnered with Alien, the film falls into a monotony of recurring images, sound bridges of pistols recharging, and drawled voice-overs, most prominently Franco‚Äôs nearly incantatory ‚ÄúSpring break‚Ä¶ spring break‚Ä¶4-ever!‚ÄĚ It all ‚Äúseems like a dream,‚ÄĚ as one character instructs us. As shot by Beno√ģt Debie (the cinematographer of French art-shocker Gaspar No√©‚Äôs Irreversibleand Enter the Void), the film grows ever more nocturnal. Finally, at the bottom of the rabbit hole, Benson and Hudgens doll up in glow-in-the-dark Pussy Riot gear to exact vengeance on a competing kingpin of Alien‚Äôs, played by rapper Gucci Mane. The expected violence that closes Spring Breakers‚ÄĒwhite girls in ski masks and bikinis blowing away a beach house full of black gangsters‚ÄĒis shot with the same somnambulant disinterest as the rest of the film. Korine politely declines to engage with the racial, sexual, and cultural implications of his climactic images in favor of a purely sensorial treatment. He just wants an invitation to the party.

Korine may think his films are difficult for the average viewer (‚ÄúThere‚Äôll always be a large segment of the audience that can‚Äôt deal with my films because I'm attracted to things that are morally and graphically ambiguous‚ÄĚ), but Spring Breakers is remarkably easy, an accessible variation on the reveling in cultural detritus that marked his last feature, Trash Humpers. The film ostensibly turns horrific, yet it never lets go of its surface sheen and erotic appeal. Perhaps for fear that Spring Breakers might seem chastising or moralizing‚ÄĒor ironic‚ÄĒthere‚Äôs no whiff of genuine danger here. It‚Äôs like a Gregg Araki movie without politics, or hip-hop without a social conscience. If he‚Äôs intended to make a film as ephemeral and gutless as the culture it portrays, then he‚Äôs accomplished this regrettably minor ambition.