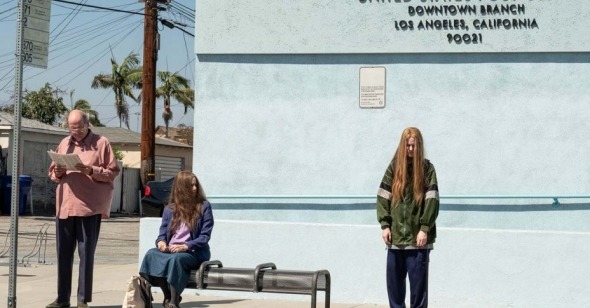 This year at Sundance, to quote the title character of Janicza Bravo’s Zola, I feel seen, I feel heard. At least in the screening rooms. As I navigate my first festival here in Park City, I’ve come to realize that the safest places to be are within the confines of the many theaters, which can be found within the city’s libraries, indoor tennis courts, and hotel conference rooms. The streets are icy and the drivers reckless, restaurants are expensive and parties exclusive. But when it comes to the films, I’ve felt nurtured, understood, and emotionally validated. Maybe this is because so many of this year’s standout narrative films come from female directors. This year’s selections include vital new work from Bravo, Miranda July, Eliza Hittman, Kitty Green, and Zeina Durra—all of whom both directed and wrote their own screenplays. While I tend to chafe at categorizing directors based on gender, each of these films is richer as a result of their lived experience as women, and the particular struggle of searching for agency in a world that limits it.

Early on, Janicza Bravo’s Zola puts a woman in charge of her own narrative. As the film opens, two women, one black, one white, do their makeup in unison, gazing at each other in adoration, before one turns to the camera and says, “Y’all wanna hear a story about why me & this bitch fell out?” What follows is a trip through a viral Twitter thread from @_zolarmoon, AKA A’Ziah “Zola" King from 2015, adapted for the screen by Bravo (who directed Lemon in 2017) and Jeremy O. Harris. Zola, who narrates the film in her honeyed voice, is played by Taylour Paige, who brings Flashdance-levels of glittered, greased-up charm to her role as a waitress-by-day, stripper-by-night. At work, Zola meets Stefani (Riley Keough at her tackiest, perkiest best), and the two immediately strike up a friendship that blossoms on screen via text exchanges, quickly eclipsing Zola’s relationship with her unsuspecting boyfriend. Zola agrees to join Stefani on a road trip to Florida accompanied by Stefani’s boyfriend (Nicholas Braun, who still manages to look earnest with a chin strap) and her pimp (Colman Domingo, who alternates between easygoing and menacing whenever it suits him) for a wild weekend of stripping and what she promises will be good money. Zola evolves into a swiftly paced action movie with the Murphy’s Law mentality of Pulp Fiction, punctuated by text notifications and purposely unflattering freeze frames. As the two women grow closer, their influence over one another waxes and wanes, declarations of love give way to suspicion and mistrust. Near the end, the film switches gears to reveal Stefani’s perspective of what went down, and who’s to blame for any mishaps (Zola, obviously), a reminder that every story has two sides.

Never Rarely Sometimes Always also sends two young women on a precarious road trip, but for different, and far more dire reasons. Eliza Hittman’s follow-up to Beach Rats is another stylishly shot social issue drama, this time focusing on 17-year-old Autumn (Sidney Flanigan), as she undergoes the arduous process of trying to stop an unwanted pregnancy without parental consent. “Are you abortion-minded?” asks a woman at a dubious Women’s Health Clinic in Pennsylvania. Autumn floats somberly through the film, resorting to self-harm when she realizes she can’t get the procedure in her home state. Eventually she and her cousin Skylar (Talia Ryder) get on a Greyhound to New York, where they visit a branch of Planned Parenthood. Skylar steps in to serve as a mother figure, shepherding Autumn to her appointment and trying to keep her spirits up as they loiter in the Port Authority bus station in between the first and second parts of the two-day procedure. Hittman, a native New Yorker, working with DP Hélène Louvert, transforms the Port Authority into a kind of wonderland of bowling and arcade games, tapping into the strange charm of the notoriously dingy and decrepit locale. They navigate this after-hours world with the help of the charismatic Jasper (Théodore Pellerin), whom they met on the bus. Pellerin is perfectly cast as a too-cool teenager (“Do you girls like live music?” “I freaking love New York”), and his scene-stealing karaoke rendition of “Wishing (If I Had a Photograph of You)” by A Flock of Seagulls is one of the more memorable moments of the film. When Flanigan steps up to sing “Don't Let the Sun Catch You Crying” by Gerry and the Pacemakers, her impressive voice is both soft and powerful, allowing her pain and resilience to share the stage with her at the same time.

Before the procedure, Autumn is questioned by a female counselor about her health and sexual history. Her voice weighted with compassion, she tells Autumn to answer “never, rarely, sometimes, or always,” to each question as the camera rests on Flanigan’s face for the entirety of the tense interaction. It’s a marvel of a scene, one that puts you in the position of the countless women and girls who have had to undergo the same emotional and physical strain. In this one moment, Flanigan expertly captures the fragility of being a young woman in a world that isn’t looking out for her, or anyone like her.

In Kajillionaire, Miranda July’s first film since 2011’s The Future, everything feels like it’s falling apart. Little earthquakes disrupt the calm of Los Angeles throughout the film, which tracks a family of impoverished scammers as they try to make a living conning the post office, travel insurance companies, and anyone else who will buy into their harebrained schemes. Richard Jenkins and Debra Winger play Robert and Theresa, who have raised their daughter Old Dolio, played by Evan Rachel Wood, to take part in their ploys, convincing her it’s her duty to pay for one-third of everything they own. Old Dolio was named for a homeless man who won the lottery in the hopes that he’d write her into his will, and she doesn’t know any other way to bond with her parents aside from plotting the next scam. Wood fully transforms herself into the deep-voiced and deeply awkward Old Dolio, clad in an oversized, mismatched tracksuit, with the same long, straight, unkempt hair as her mother. The family could be mistaken for members of a cult, and in a sense, they are, with Old Dolio as Robert and Theresa’s only follower.

July has always been fascinated by chance interactions and chosen families, and here continues where she left off with her 2015 novel The First Bad Man, which explores the connection between maternal instincts, the feminine ideal, and interactions between strangers. In Kajillionaire, Melanie (Gina Rodriguez) hits it off with Robert and Theresa on an airplane, and is subsequently thrust into the family’s orbit. It’s an unlikely fit—Melanie is a sexy, seemingly sensible woman, and her presence around the Dynes seems far from natural. But Melanie and Old Dolio end up forming a unique bond, helping each other to step outside their bubbles and ask for what they really want. Kajillionaire surprises you with its honesty, revealing that behind any given door, or any person’s cheerful demeanor, lies someone who’s lonely and looking for a family.

Things are also falling apart in Save Yourselves!, a charming sci-fi comedy written and directed by Alex Huston Fischer and Eleanor Wilson, featuring a Brooklyn couple (Sunita Mani and John Reynolds) who have retreated to the country for a technology-free week—right as an alien invasion hits the planet. The film is a refreshingly matter-of-factlook at what would actually happen to two hapless 30-somethings in the case of an alien takeover, and a dead-on take on my generation’s main fears, including Internet addiction, lack of survival skills, and the end of the world. Lawrence Michael Levine’s Black Bear likewise sets its action in a cabin upstate, telling a multilayered, multi-part saga about a couple (Christopher Abbott and Sarah Gaddon) and their houseguest (Aubrey Plaza) testing how far they can manipulate each other. For what purpose? It’s unclear. While the film seems to take its trite love triangle plot too seriously in the first half, its second half turns the narrative on its head to reveal a surprisingly funny alternate reality.

The basic plot of Zeina Durra’s Luxor isn’t its strong point either, but it’s worth seeing for the lush, painterly cinematography by Zelmira Gainza alone. Set in the Egyptian city of Luxor, where Hana (Andrea Riseborough), an aid worker on leave, encounters an old flame (Karim Saleh) working on an archeological dig, the film follows Hana as she wanders the majestic city of blues and tans, and, like Delphine Seyrig in Last Year at Marienbad, through the hallways of the delightfully dated Winter Palace Hotel. Durra allows the action to unwind slowly, the camera lingering on Riseborough as she strolls through the frame, appearing small in the vastness of her surroundings. It’s a feeling particular to being a woman away from home—both fearing and relishing the unknown.