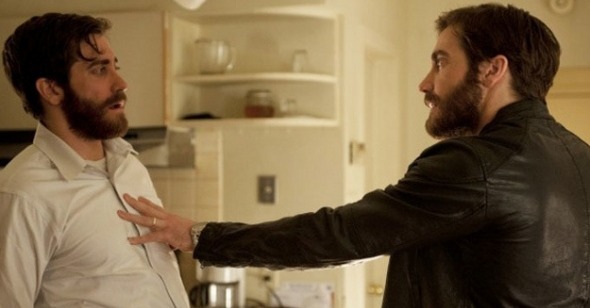 Doubled Over
By Benjamin Mercer

In Quebecois director Denis Villeneuve‚Äôs first English-language film, last fall‚Äôs Prisoners, Jake Gyllenhaal played a detective investigating the disappearance of two young girls from their quiet Pennsylvania neighborhood on Thanksgiving Day. At two and a half hours, the movie was a fictional true-crime saga that took its time with the twists and turns of the case‚ÄĒwith a vigilante-torture subplot taking us into the unseemly moral terrain that seems practically required of any high-toned procedural in the wake of the war on terror‚ÄĒbut nonetheless refrained from delving directly into the detective‚Äôs background. This was clearly a devoted man fighting the good fight, but he did not appear to be your typical departmental drone: the Norse-derived surname of Loki, the almost confrontational slick of jet-black hair, a neck tattoo peeking out from under his collar suggesting an undercover past, or perhaps an exile from some sort of hardcore scene. Most interestingly, Gyllenhaal‚ÄĒvery good in a movie that was less interested in exploring the nuanced dynamics of grief than in achieving a sort of majestic grimness (it opens with Hugh Jackman reading the Lord‚Äôs Prayer over a scene of father-son hunting)‚ÄĒgave his character a nervous tic, emerging at odd intervals to suggest something unsettled beneath the surface. He blinks, a lot, involuntarily, so that his almost manic determination seems to go muscle deep, and, in a sense, he appears to be fighting his own reflexes as he tries to catch a killer.

Now comes a new collaboration from Gyllenhaal and Villeneuve, an hour-and-a-half shard of trance-state horror that displays about as much interest in hard realism as Prisoners displayed in narrative compression (the two films debuted alongside each other last year at Toronto). Enemy‚ÄĒan adaptation of The Double, a 2002 novel by the late Portuguese Nobel winner Jos√© Saramago‚ÄĒcenters around the time-honored doppelg√§nger conceit, and the film itself looks as if it was torn straight from the pages of a slim paperback, with each frame yellowed to the hue of a foxed volume. Here, Gyllenhaal and his director get to take the suggestion of a man at odds with himself to its logical extreme, transplanting the conflict out of the ‚Äúreal world,‚ÄĚ and thus a regime of grounded gestures, and into a sort of terminal version of Toronto where no one seems able to sleep through the night. The resulting film has some thrillingly eerie left-field spells, but the director and star don‚Äôt build on their collaborative momentum so much as squander it in a bunch of little thematic feints.

Gyllenhaal plays Adam Bell, an associate professor of history whose job is portrayed here as a low-grade classroom parody (only the big concepts‚ÄĒ‚ÄúHistory,‚ÄĚ ‚ÄúTruth,‚ÄĚ ‚ÄúReality‚ÄĚ‚ÄĒappear on his blackboard). When he heads home, it‚Äôs to a dingy high-rise apartment where he lives with a girlfriend (M√©lanie Laurent) he treats like an afterthought. Gyllenhaal also plays Anthony Clare, a local actor whom Adam spots late one night in a movie called Where There‚Äôs a Will, There‚Äôs a Way, playing a beaming bellhop in a lobby scene that suggests a sunny pass at Last Year at Marienbad. The film toggles between the home lives of Adam and Anthony‚ÄĒand soon we are left to wonder just which Gyllenhaal it was that we saw in the opening scene, in which businessmen gather after hours to watch a naked woman crush a tarantula with her stilettos.

After some search-engine sleuthing, and some antagonistic back-and-forth over the phone, Anthony and Adam agree to meet at a cheap highway inn on the edge of town‚ÄĒa place that Anthony ‚Äúknows‚ÄĚ presumably because that‚Äôs where he carried out the affairs we hear alluded to by his wife (Sarah Gadon), who is now six months pregnant. All the more unsettling is that Adam seems like a fleshed-out person‚ÄĒin one of his finer smaller moments, Gyllenhaal lets out a stifled chortle at the presumably subpar content of an essay he grades at the kitchen counter‚ÄĒand Anthony, whose least open-ended action displayed here is complaining to his wife that she bought the wrong kind of blueberries for his post-run smoothie, does not.

The moments of existential WTF‚ÄĒsuch as when the self-regarding actor and the timid history teacher come face to face, only to flee the hotel premises in short order, or when the two seem ever-so-slightly displaced from their daily business as the implications of double-hood dawn on them‚ÄĒare well handled, as is the choked atmosphere of foreboding that pervades the movie. Villeneuve cuts regularly to aerial shots of Toronto, the hazy skyline looking jaundiced, its arteries down below suggesting the paved and congested metropolis Kris Kelvin traverses in Solaris before leaving Earth for good. (This movie is admirably mindful of its ‚Äúmind-bender‚ÄĚ heritage, on both page and screen.) In the most vividly surreal of several woven-in dream images, the director shows a giant spider (the motif recurs) bearing down on the city‚Äôs skyscrapers with its spindly legs.

But Enemy itself seems gradually more interested in something other than the malleability of identity in an increasingly decentered and disaster-prone city, and the film begins to feel a little too top-heavy for its fast-and-loose structure. In addition to the huddled apartment blocks, the brutalist architecture of the college campus where Adam teaches serves as evidence of a place that‚Äôs forbidding by design, but gradually Villeneuve and screenwriter Javier Gull√≥n relocate the threat from without to within. A scene between Adam and his mother (Isabella Rossellini) turns these tables rather forcefully, as she dismisses his claim to have met a copy of himself as rubbish, and goes on in a series of offhand comments (encouraging him to give up his movie-actor pipe dream, hinting at his past infidelities, etc.) to conflate the heretofore divergent personalities of her son and his double. This meeting casts light on the divided-self developments that soon follow: Anthony, apparently seeing an opportunity, tries to threaten Adam into letting him take his girlfriend on a ‚Äúromantic getaway‚ÄĚ; Adam, cast out of his old life, suddenly finds himself taking a cab up to Anthony‚Äôs apartment building. Rather rapidly, the movie tightens in on the masculine-fidelity-crisis angle, all the while maintaining its not-quite-veiled meta-commentary on the art of acting (it is certainly no accident that this is what Anthony does, or, perhaps more aptly, is trying to do, since he has only three feature credits to his name), in which a performer must use his own persona to invade and inhabit the skin of someone else entirely.

For Villeneuve, who‚Äôs been accused by some of brute-force emotional manipulation in his previous dramas (including the Oscar-nominated Incendies), Enemy offers a refreshing change of pace, a quick gloss on a surreal scenario with an illustrious literary provenance, suitably more beholden to atmospheric tone than to baseline plot logic. If Enemy is ultimately unsatisfying, though, that is largely because of how scattershot it feels, especially for a movie of such brevity and velocity, content to toss off loaded suggestions without attempting to marshal those toward any larger purpose. This project is initially intriguing enough to come off, in the final estimation, as a lost opportunity. Enemy has the air of a one-off, a chance to experiment in between more substantial paychecks, but if Villeneuve is one day able to bring a little more thematic coherence to a tale of a disordered mind, we might have on our hands a private dystopia of real distinction.