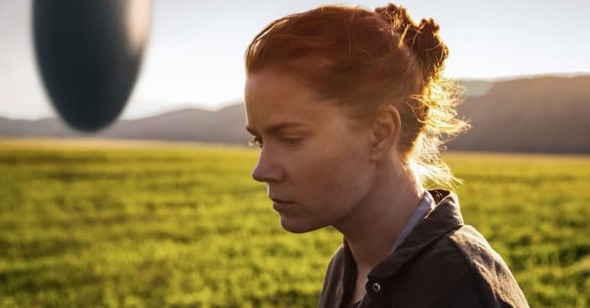 Susan Sontag once wrote, “Time exists in order that everything doesn’t happen all at once . . . and space exists so that it doesn’t all happen to you.” These constraints are what make us human, capable of memory and fantasy, but unable to live them in a single instant. Thank god.

We all experience life as a series of beginnings, middles, and ends—from the days we live to the stories we tell. In the opening sequence of Denis Villeneuve’s Arrival, linguistics professor Louise Banks’s young daughter, Hannah, grows up before our eyes. She’s born, and moments later, we see her as a child. She giggles; she plays in the backyard. She loves her mother, she hates her mother, and all too soon, she falls ill and dies.

In a way, Arrival may be the sci-fi blockbuster answer to Terrence Malick’s The Tree of Life. It doesn’t so much dwell on the big themes of time and memory, as lay them out in broad strokes over the story of one woman’s life. When twelve mysterious spaceships touch down on Earth, Louise (played by Amy Adams) is tapped to decipher their language. Despite the invasion, the omnipresence of doomsday news reports, and China and Russia’s threats of war against the aliens, the film’s emotional core rests squarely on Adams and her ethereal blue eyes. Arrival is a chronicle of her. Louise’s alternating fear and boldness carry this movie, right from its lyrical opening.

The twelve identical ships, each spotted in a random location on Earth, are unlike anything we have ever encountered, on-screen or off, like massive, oblong contact lenses made of stone. America’s only “shell” (stubborn, literal humanity can let nothing go unnamed for long—the ships are quickly dubbed “shells,” and its inhabitants “Heptapods”) is discovered on an open field in Montana. What is the ship made of? Who’s inside? What do they want? Villeneuve is a master of the ultra-slow reveal. By focusing on the personal journey of the woman seeking these answers, he holds our attention until the remarkable end.

Upon the aliens’ arrival, Colonel Weber (Forest Whitaker) pays Louise a visit. She has helped the army decode Farsi before, but this job will require an unusual level of inventiveness. When Louise insists on meeting the creatures in person, Weber threatens to seek the help of a rival linguist. “Ask him the Sanskrit word for ‘war’ and its translation,” Louise urges, before Weber leaves. Soon, the colonel returns with the other linguist’s answer: “gavisti,” which means “an argument.” Louise’s translation? “A desire for more cows.” If two professional translators can’t agree on such a loaded term, something is bound to go awry. Soon enough, China moves to attack these Heptapods. That the aliens come in peace is a fact epically lost in translation.

Working alongside Ian Donnelly (Jeremy Renner), a theoretical physicist, Louise sets off to communicate with creatures she finds even more mysterious than her fellow humans, and much more open to dialogue. Their goal is to get the Heptapods to answer the big question. Louise scrawls it on a whiteboard, among Ian’s useless mathematical equations: “What is your purpose on Earth?” But first she needs to figure out if they understand questions, if they can distinguish between singular and plural pronouns. Armed with a hazmat suit and a dry-erase board, she gets to work.

The inner chamber of the spaceship looks like a classroom designed by James Turrell. Behind a clear panel, the aliens’ tentacles emit black ink into a dense, cloudy atmosphere, forming circles similar to stains left behind from a coffee cup. Louise attempts to make sense of their penmanship, and shares with them her own. She successfully teaches Abbott and Costello (the names given to this ship’s intergalactic visitors) the word “human.” Progress is made in leaps and bounds, but never quickly enough for the military men who hired her. To Weber, “weapon” can only indicate one thing. To Louise, the possibilities are infinite. Each circular symbol formed by Abbott and Costello is a unique, complete idea, lacking a beginning or an end. Every communication event is visually arresting, and, since the circles never close completely, the language is apparently limitless and suggestive of larger questions the film raises about the linear experience of time. Human languages are processed sequentially: left to right, right to left, top to bottom. Arrival draws parallels between our understanding of sentences and our notions of time and space—and then envisions a world without these boundaries.

The film often recalls many of its sci-fi contemporaries: its emotional undercurrent resembles that of Gravity, in which Sandra Bullock’s character also mourns the loss of a young daughter; and Louise’s scholarly profession brings to mind The Martian, where another unlikely discipline (botany) gets our hero out of an extraterrestrial rut. Villeneuve’s sci-fi thriller may concern a linguist’s quest to decode an otherworldly tongue, but this grossly oversimplifies its meditation on the past and the future, with an ultimate lesson very much rooted in the present.

Much in the way of Malick, Arrival relies on a single life to paint a picture of the universe. Inside the belly of the monolithic spacecraft, Abbott, Costello, and a dry-erase board are all we need to unpack the delicate term “human.” The film is at its best when Louise is teaching and learning from the Heptapods. Her pale face, quivering lip, and poetic voice-overs carry us through these lessons, through the loss of Hannah, and through a world on the brink of self-destruction. “Time exists in order that everything doesn't happen all at once…” If it did, would your life look any different?