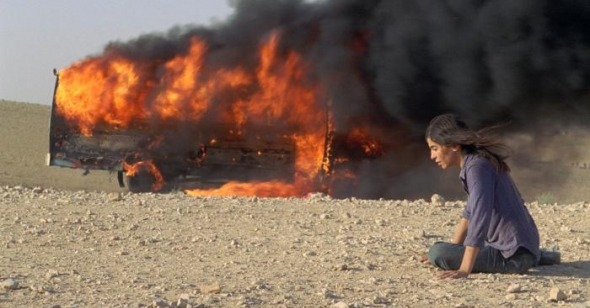 Call It Sweep
By David Ehrlich

Denis Villeneuve‚Äôs Incendies‚ÄĒan operatic saga of intergenerational woe‚ÄĒis the cinematic equivalent of a Harlem Globetrotters game, with brazen contrivances and a preordained outcome repurposed as dazzling spectacle. A strained melodrama that unspools like the bastard child of Homer and Alejandro Gonz√°lez I√Ī√°rritu, Incendies devotes the brunt of its 130 minutes to earning the audacity of its resolution‚ÄĒit‚Äôs a work of such unchecked ambition that it almost has to be excused before it can be appreciated at all. But if Villeneuve‚Äôs film ultimately resolves itself as little more than a gaudy parlor trick, it‚Äôs an expertly executed bit of chicanery whose punchline hits you square in the gut.

Incendies follows two contemporary Canadian twins as they attempt to untangle the twisted roots of their family tree, twentysomethings reborn as amateur genealogists when their late mother leaves a will that reads more like a treasure map. Adapted from Wajdi Mouawad‚Äôs play of the same name‚ÄĒa four-hour opus that Villeneuve supposedly saw by happenstance on the last night of its Parisian run‚ÄĒIncendies approaches the life of Narwan Marwal (Lubna Azabal) the way that Dan Brown might approach a painting in the Louvre. Narwan has just died in Quebec, the city in which she raised her children, Jeanne and Simon, after stealing them away from the unspecified Middle Eastern country of her tragic adulthood. The children‚ÄĒnow adults flirting with thirty‚ÄĒare shocked when the notary reads Narwan‚Äôs will and final testament: she kept such life-tilting secrets from her children that it seems she was less of a mother than a levee.

In death, Narwan has left to Jeanne (Melissa Desormeaux Poulin) and Simon (Maxin Gaudette) two envelopes: one intended to be delivered to a father they thought long-dead, the other to a brother they never knew existed. In order to obfuscate and deepen the genealogical scavenger hunt, Villeneuve‚ÄĒgranted carte blanche by Mouawad to tell the story however he wished‚ÄĒstructures the film like an insidious air traffic controller orchestrating a mid-air collision, intercutting between Jeanne traipsing through the Middle East on the trail of her mother‚Äôs footsteps and a young Narwan leaving those breadcrumbs some twenty-five years earlier. To underscore the extent to which personal histories are the result of seemingly unrelated narratives (and to ensure that no portent is left behind), Villeneuve announces each new episode with red text as bold as it is oblique, guaranteeing that his audience will be comfortable in their confusion.

Like any effective bit of shameless deception, Incendies begins by peppering its oblivious audience with the kind of furtive imagery that will in retrospect be recognized as hints. Villeneuve‚Äôs opening shots are imbued with period details but scored to Radiohead‚Äôs bitterly funereal 2001 opus ‚ÄúYou and Whose Army?‚ÄĚ an anachronistic touch that anticipates the film‚Äôs efforts to collapse time upon itself and avoid pinpointing its narrative to one particular conflict.

The country in which the Marwals‚Äô tale unfolds is never identified, a strategy Villeneuve nicks from Costa-Gavras‚Äô Z, and one that allows him to create a labyrinth of political factions that represent nothing more than marginally discriminate rage. As a result, the various unflinching scenes of cold-blooded murder willfully cohere into a gestalt of Middle Eastern sectarianism, which refuses to be distracted by the semantics of suffering‚ÄĒto that end, Incendies effectively spends 130 minutes unpacking the refrain from Steve McQueen‚Äôs Hunger: ‚ÄúThere is no such thing as political murder, political bombing, or political violence. There is only criminal murder, criminal bombing, and criminal violence.‚ÄĚ It never gets much deeper than that, but the force of Villeneuve‚Äôs filmmaking elevates potentially vile pap to the stuff of popcorn poetry.

Like the most punishing works of Kenji Mizoguchi or Lars von Trier, Incendies rides the momentum of its calamities. Young Narwan ricochets between opposing forces with a lack of agency that recalls the hapless Forrest Gump, occasionally assuming a proactive role if she thinks it might be conducive to her survival (a sequence in which she assassinates a political leader finds the film at its most elliptical). The parallel narratives steam along with the inevitability of destiny and Villeneuve‚Äôs austere compositions support his operatic plotting‚ÄĒa rough and tumble verit√© aesthetic might have bristled against the contrivances of the melodrama, but Villeneuve‚Äôs frames are too adroit to feign happenstance. The film‚Äôs most direct images (i.e. that of Narwan‚Äôs profile obscuring the wreckage of a terrorist act, a fire-ravaged bus which burns out-of-focus in the background behind her) are unapologetic in their thematic emphasis. Incendies often plays like the sensationalized Cliffs Notes of an apocryphal story its director once heard.

As with any good magic trick, Incendies‚Äô power is ultimately predicated upon the extent to which it can recast the ordinary as extraordinary‚ÄĒJeanne and Simon could have immediately torn open the letters their mother left for them, but Villeneuve punishes both his protagonists and his audience alike until they‚Äôre sufficiently trained to respond to the information therein from a more sympathetic perspective. Jeanne and Simon are simply bequeathed the sort of earth-shaking revelation that most twist-dependent films labor to keep hidden, but the twins‚Äô journey teaches them the dangers of allowing such a bombshell to further perpetuate a legacy of hatred.

The film‚Äôs bitter aftertaste stems from Villeneuve‚Äôs didactic touch, which can make Incendies feel as though it is repurposing decades of Arab tragedy into a sordid riff on National Treasure, and the film so insistently views political conflict from the perspective of its casualties that it veers dangerously close to denying that even positive civil movements often come at a heavy cost. Nevertheless, Incendies remains an unusually compelling case of pedagogy made palatable by its narrative sweep‚ÄĒit‚Äôs convenient but not clean (the unfussy final moments are poignantly ambiguous), and a stirring reminder that history isn‚Äôt only what we make of it, but also what it makes of us.