The Woman Who Ran 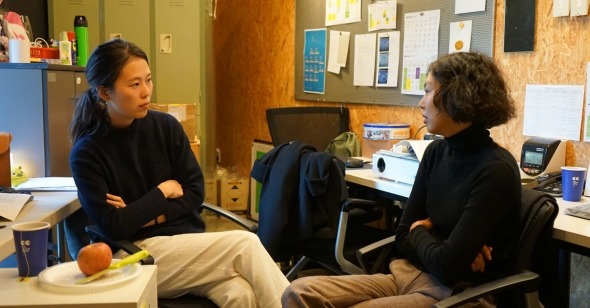 Gamhee meets with three women over the course of two days. In two of these encounters, she repeats many of the same observations. She wishes she could live where these women do, whether in the countryside amongst farm animals and amidst silence, or in an affluent city teeming with artists. She remarks how this is the first time in five years that she’s been apart from her husband, who’s away on a business trip. She meets displays of surprise at this with something like deflection, saying their codependency is how it’s always been, though codependency may be the wrong way of describing it. As Gamhee, Kim Min-hee’s demeanor throughout The Woman Who Ran is staid, pensive, at times slightly cagey. Where one might expect a kind of effusiveness or hesitancy to embrace the chance to be away from one’s spouse after so much unbroken time together, Gamhee seems to prefer to simply be part of the conversation.

As the film goes on, director Hong Sang-soo adds layers of emotional complexity and social critique. A conversation about the benefits of vegetarianism while the participants eat freshly grilled meat morphs into the spectacle of watching two people navigate a wide expanse created by time apart, when once they knew each other well. A not-so-chance encounter with a former loved one has the potential to become a wellspring for regret and forgiveness. It might be the writer-director’s most salient and awe-inspiring trademark, this ability to subtly shift a given scene from seemingly benign and facile to something altogether more knotted and potentially tense. That’s a skill of keen observation and rendering, especially given that his scripts are written in famously quick fashion. But whether it succeeds off the page comes down to the players and Hong’s willingness to be playful. For example, take one of the standout scenes in the film, when an entire conversation about whether stray neighborhood cats should be fed or left to starve takes place with one cat at the bottom of the frame, patiently watching, until all the humans leave and the cat looks straight at the camera.

Tasked with injecting a sense of immediacy and awkward realism into what, for a novel would be rich characterization but in a script must be spare prose, Kim Min-hee, Seo Young-hwa, Song Seonmi, and Kim Sae-byuk utilize that actorly skill of making existing in a frame look easy. They are working in more extended durations, with long dialogue scenes that don’t cut until the conversation is over. This is part of Hong’s style, utilizing pans and zooms to reorient two-shots of people talking into medium shots and close-ups. What unfolds has the chance to seem more like spontaneous conversation, or well-staged theatrical performance. Hong’s camera moves, but from a stationary vantage point, rarely following its subjects out of a given space.

The Woman Who Ran finds Hong in a particularly spare mood. There’s less of the kind of dramatic irony found in some of his previous films, such as Claire’s Camera. His approach—including the unpredictable way he zooms into close-ups in the frame—can be unbalancing, but it’s always in service of drawing attention to something essential. In one scene, Gamhee’s friend Young-soon talks about her neighbor, a young woman whose mother fled the family some time ago. Most nights, Young-soon goes out and smokes with her, in view of Young-soon’s security camera. As she explains this, both she and Gamhee watch Young-soon’s neighbor through the security camera. Though we know what they’re looking at, we don’t see it until the camera finally pans over to it. The story of Young-soon’s neighbor, as she sees her, matters more than the reality, which may be what The Woman Who Ran is really concerned with. Gamhee’s description of her husband to different people throughout the film remains largely the same. But the contexts shift. It can signify her devotion to him, or her boredom, or her anxiety. In each case, the person listening has no way of knowing if Gamhee is telling the truth, even as the audience may have an inkling that she isn’t. The same is true for Gamhee’s companions. Are they illustrating a version of their lives they wish to present to a friend, rather than life as it actually is?

There are several avenues to take when talking about Hong’s work. Repetition, the presence of alcohol, “neuroticism,” what some call his anti-style of cinematography—these are standout similarities between his films. Coming to his work with the knowledge that many non-Korean critics liken him to Woody Allen might prepare an unfamiliar viewer for something approaching the solipsistic, where conspicuous wit and insecurity play out in a male-driven narrative justifying or exaggeratedly vilifying the fictional stand-in for the director. The truth is, Hong works methodically with a fine brush and much of that has to do with the distance, sometimes literal, sometimes metaphorical, between people trying to communicate. Note the staging of his scenes here, how people almost always have some physical object between them as they share increasingly intimate details about their lives, or how that physical object, like a plate of freshly cut apples, can be used to close distance in the presence of silence.

Hong is particularly adept at depicting confused desire, effective in cinema when the audience is given the opportunity to contrast action with stated intent. There is no best way to achieve this. Hong seems to prefer simple staging and the gradual revelation of contradictions over time. Gamhee says to one friend that she doesn’t like to meet new people. “I say things I don’t need to say, and do things I don’t need to do.” To another friend the following day, she marvels at a lifestyle that might solely be comprised of meeting new people. Financial freedom comes into conflict with a desire for a slower lifestyle. Reaching out and connecting with others stands at odds with seclusion. There is also the off-screen presence of Gamhee’s husband, who is variously characterized as independent, smart, and a little needy. When asked about how things are between them, Gamhee never reveals more than “Things are fine.” As illustrated in past Hong Sang-soo films like Claire’s Camera or Right Now, Wrong Then, describing a partner can often sound like one talking about a child, a source of dutiful love and a locus of intermittent, accumulated frustration.

Gamhee’s third and final meeting is with a woman from her past who is now married to Gamhee’s ex. What seems to be a chance encounter unfurls into something tortured and melancholic. It’s not that this scene defines the movie as a whole, but it does reshape what came before it. A largely quiet and hypnotic film becomes suddenly tense. When we return to people, whether old friends or old lovers, what do we hope to achieve? And when things don’t go as we expected, why do we feel foolish for thinking they would? In typical form, Hong’s response isn’t straightforward. Instead, he offers multiple examples of characters attempting to answer these questions, for themselves as much as for those asking. And just because their feelings may change doesn’t mean they’re lying. Hong knows that depending on whom we’re speaking to and when, different feelings may be more truthful than others.