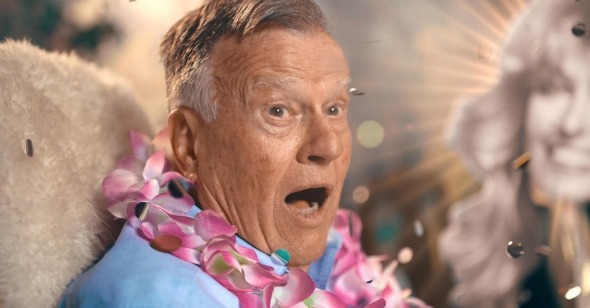 Death Becomes Him
By Susannah Gruder

In her 1964 memoir, Une mort très douce (A Very Easy Death), Simone de Beauvoir confronts her mother’s mortality as she recounts the final weeks of her life. “Her death, like her birth, had its place in some legendary time. When I said to myself, ‘She is of an age to die’ the words were devoid of meaning, as so many words are. For the first time I saw her as a dead body under suspended sentence.” For Beauvoir, as for any child who experiences the loss of a parent, the question emerges: how can this seemingly omnipotent figure be overtaken by their own body? The documentarian Kirsten Johnson grapples with the same question and her own fear of living without her beloved father, Richard “Dick” Johnson, in her latest autobiographical work, Dick Johnson Is Dead. In the spirit of films like Chantal Akerman’s No Home Movie and Naoko Nobutomo’s I Go Gaga, My Dear, Johnson tries to capture him on camera to come to terms with his eventual disappearance, while also somehow keeping him alive.

There’s a certain amount of masochism inherent in all of these autobiographical grief narratives, a compulsion to look the taboo subject of death in the eye. Johnson takes a radical approach, however, embracing a kind of “immersion therapy” to rid her of her phobia of Dick’s passing. The signs are there: Dick has shown increased instances of memory loss that suggest the early stages of Alzheimer’s. But instead of ignoring the specter of death, Johnson, along with her father, embarks on a mission to face it head-on. With his consent, she stages Dick’s death multiple times, imagining that he will be felled by one freak accident after another—an air conditioner falling on his head, a construction worker whacking him in the neck with a piece of scaffolding, a dramatic fall down a flight of stairs. They even go so far as to pull a Tom Sawyer and stage his funeral, complete with guests and heartfelt eulogies. Dick is more than game, having always wanted to be in the movies. It turns out Dick’s a natural for the screen, his boyish energy and limitless enthusiasm making him the perfect muse for Johnson as a documentary-turned-screwball-comedy director.

In Johnson’s extensive work as a documentary cinematographer, she has learned to remove herself from the sounds and images she films, at least on the surface—she explores this fraught relationship in her sharp and mesmerizing film Cameraperson. In that unique piece of self-portraiture, Johnson weaves together disparate footage she’s shot over her venerable career partly as a way of exploring the impossibility of truly distancing oneself from what she captures on camera. Cameraperson features footage of her mother in the debilitating stages of Alzheimer’s, and in Dick Johnson she laments that it’s the only video she has of her—nothing of the vibrant, loving woman she once was. This film, then, is fueled in part by regret over this, which imbues her footage of Dick with an overwhelming affection, as though this buoyant spirit could slip away from her at any second, too.

The push-pull of objectivity and subjectivity at the heart of Cameraperson is again taken up in her new film, as Johnson tries to balance the roles of director and daughter before our eyes. It’s clear that the staged scenarios are her way of distancing herself from the reality of his death—by repeatedly showing him rising like Lazarus from the dead after she yells “cut!” it almost feels like he’s invincible. To quote the subject of Nuria Giménez’s My Mexican Bretzel, another semi-fictional documentary, screening as part of this year’s New York Film Festival, “Filming is one of the best forms of self-delusion.” Taking the elaborate act one step further, Johnson shows her father’s afterlife, inspired by her upbringing in the Seventh-Day Adventist Church, which preaches that the righteous will ascend to heaven when Jesus returns to earth for the Day of Judgment. Johnson’s vision of heaven is a cross between a psychedelic drug trip and a Busby Berkeley musical—Dick eats chocolate fudge (his favorite) and dons a Hawaiian lei as a chorus of angels serenades him, along with fellow heaven-dwellers like Frida Kahlo and Farrah Fawcett. He’s also reunited with his wife, and the two share an ebullient dance sequence enacted by professional dancers wearing masks of the two in their prime. But Johnson complicates this beatific vision by documenting her own making of it, deconstructing the fantasy of life after death: a saint drinks from a Nalgene bottle, cotton ball-clouds dangle by strings from the ceiling, and Dick falls asleep on the soundstage in his beloved lounge chair and ottoman.

The film constantly oscillates between these real and imagined worlds, but Johnson finds ways to connect with her father in both realms. Her extravagant dream sequences feel like a gift to Dick: in one sequence, Jesus blesses his misshapen feet (he was born without fully formed toes, a constant source of embarrassment for him) and they’re miraculously made perfect. Back on earth, the way Johnson sympathizes with her father’s suffering also feels like a kind of blessing—she doesn’t negate his pain or tell him it’s going to be all right. The film is shot over several years, and during this time Johnson helps move her father out of his home in Seattle and into her apartment in New York, which, as is whimsically announced via airplane banner, is situated “right next door to her kids’ two dads.” Johnson tries to keep things light, but as time goes on and Dick’s condition worsens, it becomes harder to counter Dick’s fears with a silly gag.

In a scene shot in her father’s study as he’s moving out of his home, Johnson and Dick remember the end of her mother’s life, and they both start to cry. Kirsten remains behind the camera, but at a certain point seems to drop the apparatus, letting it dangle near his ’70s-printed rug. She keeps the camera in hand as she goes to hug him, saying, “It’s scary” through tears. The camera, still focused on the rug and her father’s shoe, seems to bear the weight of her pain. Her father asks if she’ll include this in the movie, and it ends up being one of the most moving moments in the film.

Johnson’s latest, like Cameraperson, doesn’t fit easily into the documentary genre as we know it. It instead moves more into the realm of autofiction, playing with ideas of truth in storytelling in order to paint a more honest picture of preemptive grief, the feeling so many experience when they think of their parents’ passing. Johnson displays the same mix of playfulness and gravity that Agnès Varda experimented with in her autofictional filmmaking—but instead of recreating memories with the help of a large crew and elaborate sets, as Varda does in films like The Beaches of Agnès, Johnson tries to pre-construct the future as a way of easing into the eventual heartbreak she will experience. The camera becomes an extension of Johnson’s memory, as well, recording the way Dick laughs, the way, somehow, he barely has any wrinkles, the way he eats chocolate fudge cake. It feels like the same impulse Varda had when she shot her husband Jacques Demy as he lay dying, zooming in close on his skin as if to caress him with her camera before he faded away.

Hearing Johnson speak so candidly with her father, it’s clear, as she says, that he’s not only her parent, but her best friend. As is typical with aging parents and their children, their relationship goes through countless iterations as he comes closer to the end of his life. She’s at once his daughter, his caregiver, his therapist, and, in this unusual collaboration, his director. At one point, Kirsten is preparing to go away for a few days, and Dick tells her to be careful, as his eyes well up. “You have this little brother that you need to take care of,” he says, referring to himself. She asks him what the little brother does. “He just tags along behind,” he says. “Gets in your way.” She reassures him that he doesn’t, of course, and it feels like she really means it.

The impression one gets from the way Johnson films her father throughout is that he’s a towering figure, a tall man with a boundless energy and an enormous presence—and that he’s always appeared this way to her. But the subjectivity of her gaze is revealed as we watch her direct a scene in which she leads him down the sidewalk, right before he feigns a fatal trip-and-fall (with the help of a stuntman.) For the first time in the film, you can see both of their statures in full. It turns out Dick Johnson is a relatively small man, puttering happily down the street. You’d hardly know it from the way she films him, but Kirsten has been towering over her father the whole time.