Best of the Decade #8: Cameraperson 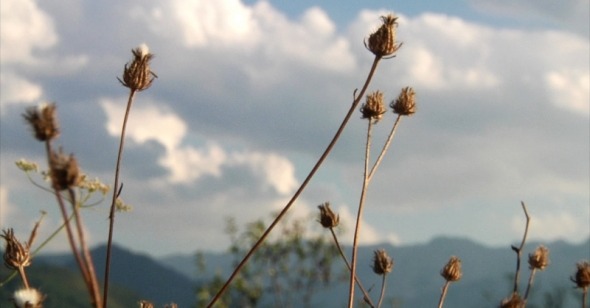 It’s easy to forget that a documentary records a unique moment in time not only for the lives of those who appear in front of the camera but also those behind it. This is true regardless of whether those behind the scenes are explicitly seen or heard, though it can be difficult to bear in mind, or actively ignored for the sake of a cleaner, more focused viewing experience. Directors usually excise their presence save for a few winking acknowledgments—think of the brief image of a camera-toting Al Maysles in a mirror just beyond Little Edie in Grey Gardens or Agnès Varda’s trademark use of reflective surfaces to reveal herself—and viewers follow suit by suspending their disbelief regarding the interactions that must occur between filmmaker and subject before, during, and after each moment that makes it onto the timeline. One exception, of course, is the personal documentary or diary film, in which, typically, subject and maker are in some way conflated. And then there is Kirsten Johnson’s wholly original Cameraperson, which, while intensely personal (the film is entirely from her POV) and very much a documentary, neither goes out of its way to remove traces of the maker nor takes her as subject exactly, but acknowledges, emphasizes, and elevates the idea that the camera is an extension of a particular human being, and that the images before us are indelibly imbued with her perspective and presence.

As opening on-screen text states, Cameraperson is made entirely of footage filmed by Johnson over decades she spent working as a cinematographer, sometimes for films she directed, but usually in collaboration with many other filmmakers. It is a profession that has been notoriously difficult for women to break into, let alone receive praise and steady work in; the non-gendered choice of title feels intentional in highlighting this lack of representation in the field, even as it decentralizes a gender binary. While Cameraperson certainly utilizes what might be considered more traditional documentary material—frank interviews, evocative landscapes, and intimate vérité—it also includes those moments that in most cinematic contexts would be considered outtakes: a self-conscious discussion between cinematographer and director about finding meaning in a murky cityscape; the moment when, afraid for a child playing with an axe, the normally silent person holding the camera cannot help but exclaim “Oh, Jesus.” In “I” statements that make clear we are about to experience a film that atypically foregrounds its own subjectivity, Johnson’s text also explicitly expresses that she considers this massive trove her personal memoir. While this opening text may seem merely informational, a statement of fact, in a few short sentences it radically reframes many of the ideas about film and documentary-making that we most fervently cling to.

Conventional wisdom often dictates that to best serve nonfiction subjects, to deliver their stories to the world in the most “authentic” way, the documentarian must be neither seen nor heard, a fly on the wall, upholding the fallacy of objectivity. In this film, however, it is Johnson’s pervasive presence, the moments when she disrupts the typical construction of a scene by including the reality of her participation, which provide a beautifully messy emotional connection to the material—for example, when two hands appear to wipe a car windshield as she covertly films police in Sana’a, Yemen, or a very early shot in which we hear an off-screen Johnson gasp, then sneeze, shaking the camera just before a bolt of lightning splits the flat Missouri landscape.

Such moments highlight the humanity of both cameraperson and subject. In using her archive, Johnson is creating a work of structural experimentation, but not simply for its own sake; she is also finding a way to impart the compassion and understanding her work has shown her. The concept of documentary-as-memoir would not resonate if so many of these many moments didn’t feel like they could be taken from our own lives, if we didn’t implicitly understand that by showing us what happens behind and between the scenes she is actually exposing some of the most profound, the most true moments in the lives of her subjects—when they have actually forgotten the presence of the camera but not the human attached to it. To witness this connection between subject and filmmaker in the moment it is forged, so evident even without Johnson appearing on-screen, brings us all a little bit closer.

Also contrary to conventional documentary practice, in which finding the universal in the personal often means a hyper-narrow narrative focus, is the breadth of what Johnson is here recontextualizing. The film moves easily from footage of a maternity ward in Nigeria, to postwar Bosnia, to the heart of the Midwest, but not in a way that overwhelms or homogenizes. Rather it highlights moments of synchronicity between experiences, across time and geographical location, the nimble editing of Nels Bangerter grouping images according to a principle of connection whose definition is constantly shifting. Sometimes this is guided visually, for example by the similarity of a purposeful stride in subjects separated by continents but cut in perfect rhythm; sometimes thematically, as in the unusual exploration of motherhood that emerges when the film cuts from a woman in Huntsville, Alabama, tearfully explaining her decision to have an abortion to footage of Johnson’s own Alzheimer’s-stricken mother on a sheep ranch in Wyoming.

Cameraperson shares the humanist vision hard-won by its author through unflinching and sometimes grueling experience, without reducing the unique character of cultures or individuals. It celebrates idiosyncrasy while amplifying universality through repetition of the most elemental of human experiences; love, family, disappointment, grief. Nothing less than life and death are presented here. It is a film that argues through images and how they are ordered that when a life is being birthed or snuffed out, when someone is suffering or someone is laughing, it ceases to matter what language is being spoken. The lines between places and people and things don’t just blur, they are made unrecognizable and therefore meaningless, transcending the way in which they have been traditionally categorized and filed.

Sometimes Cameraperson widens its scope to remind us that, if looked at properly, even a personal archive will inevitably reflect the forward march of history. This is most powerful in a sobering sequence that shows a series of images of seemingly innocuous spaces that once bore witness to some of recent history’s most brutal violence. The film cuts from images of modern-day Serbia, to a field of sunflowers representing what was once the massacre of indigenous people at Wounded Knee, to the image of Mary in a Nyamata church where 10,000 Rwandan Tutsis were murdered, to the concrete shell of Hotel Africa, an execution site during the Liberian War. The images remind us that these various countries are connected in their experiences as much by suffering as by love and humanity. But they also echo the driving concept of the film: that images come weighted with history, and each deserves to be given context and meaning.

Too often, archival-driven documentaries, including those that come from a personal archive and incorporate more recently acquired and therefore inherently topical footage, are treated—even by critics—as if they fell together effortlessly, as if these films made themselves. (It is worth noting that archival documentaries are rarely recognized for awards in the field and are particularly overlooked in terms of editing.) Without the sensitive, playful, and very much intentional order placed upon the series of images here, the epic significance of Cameraperson might not have emerged so fully or resonated so deeply. The last image in the march of atrocity sites is of the Bibi Mahru Hill Swimming Pool in Kabul, standing eerily empty since it was repurposed for public executions by the Taliban. We then return to an Afghani child who has appeared in the film earlier, describing how a rocket tore off the head of his brother and left him nearly blind in one eye. What’s taking place is a rich, purposeful, and effective layering of emotional weight: the locations that immediately preceded this moment, already complicated by our being made aware of the violence they bore witness to, are imbued with even more meaning by the testimony of a single child. We are forced to reckon with the emotional cost of war, of both the individual lives impacted and the sheer number of them. Johnson is unable to remain impassive here; although it may not have appeared in The Above, the Field of Vision short the footage was initially intended for, we hear her voice break, as she explains to the boy that, although she cannot speak his language, his story has brought her to tears.

Some of the most affecting moments in the film are those featuring Johnson’s personal footage with her family, from her mother contending with her dementia in the twilight of her life to her co-parenting children with fellow filmmaker Ira Sachs and his partner. Johnson is allowing herself to be as vulnerable as the people whose lives she has filmed, disrupting the balance of power between subject and filmmaker. Cameraperson is a film about film, and a film about self, which somehow avoids narcissism or navel-gazing; it is ultimately about the seer and the seen in equal measure. There’s a profound moment when, over a relatively neutral image of people walking through a market, Johnson describes the process of making subtle eye contact to ascertain consent—one of the most crucial skills of the documentarian, and one of the very hardest to articulate or teach. It is a feeling, a shift in the internal registers, how to convey something with the eyes alone, or with a gesture that somehow conveys empathy while still holding the camera steady and over half the face. The necessity of trying to balance power, to respect the weight of responsibility we should feel as human beings entrusted with the fraught story of another, is in every frame of this film, presumably just as Johnson described it.

Cameraperson is exceptional not only for what it illuminates about the process of documentary filmmaking but also for how it wholeheartedly embodies the sacred idea that the most specific stories can express the most profoundly universal truths. What film of the last decade—fiction or nonfiction or in-between—more unflinchingly reflects the needs and crises of our times, the hunger to connect and belong that seems to keep slipping just beyond our grasp? There are times when the flow of images touches on the archetypal, slides toward the conceptual or abstract, but we are always brought back to the grounded reality of the human embodied by the camera: a snippet of conversation, a sigh, a sneeze. And so the film goes on, flitting between the personal and the universal, holding the balance, and reminding us that every moment of every life is worthy of our time.