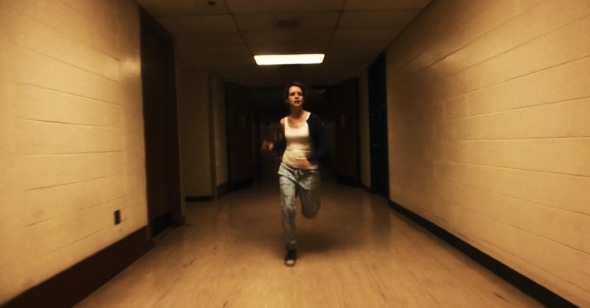 The lunatics are running the asylum is a trusty, dusty idiom that one might say is “more relevant now than ever,” though in point of fact rarely in human history has it not been true to some degree. It’s also the premise of Steven Soderbergh’s new low-budget thriller, Unsane, in which some derangement seems a near-universal contemporary condition.

The asylum in question is Highland Creek Behavioral Center, a facility somewhere in a Pennsylvania suburb. Sawyer Valentini (Claire Foy), a young woman recently relocated from her native Boston to a new job in an unnamed city, finds herself abruptly locked away in Highland Creek without her consent. The trouble started when she sought out a bit of counseling for the lingering after-effects of an ordeal with a stalker, making the mistake of giving a wrong answer to a seemingly innocuous question about self-harm from a matronly-seeming interlocutor. The more that Sawyer revolts against her captivity, the more she seems to confirm her captors’ opinion of her mental health, but staying diplomatic under duress is no longer an option when she discovers that her unwelcome suitor, David Strine (Joshua Leonard), has somehow landed a job dispensing medication in the clinic under another name—assuming of course that this “David Strine” isn’t a figment of her imagination after all.

With Soderbergh, as with Otto Preminger, there is almost always a “hook” of some sort. Bubble (2005) was an innovator in the now-common practice of day-and-date releasing, available simultaneously in cinemas and via the HDNet Movies service, street cast with amateurs from the armpit of Appalachia. The Girlfriend Experience (2009) and Haywire (2011) might also be seen as stunt casting exercises, giving lead narrative film roles to performers from very different physical disciplines, respectively, Anal Cavity Search 6 star Sasha Grey and MMA competitor Gina Carano. His most recent feature, Logan Lucky, was made outside the usual marketing and distribution system, featuring stars working for scale with the promise that they would eventually be able to share directly in the film’s potential profits. With Unsane, Soderbergh is yet again trying to outmaneuver the cumbersome, lumbering studio mechanism—the film was a “secret” shoot, done on the fly on an iPhone 7 Plus equipped with additional lenses. Unsane isn’t the first iPhone-shot feature of note—Sean Baker’s Tangerine (2015), for example, was shot with a 5s—but here the choice is self-consciously at the service of an ethos. In his practice, Soderbergh seems to be following a philosophy that guitarist Robert Fripp has advocated and refined throughout his career, articulated thusly in a 2003 blog post: “One person, with a camera or a gun, can cause disruption far beyond the quantitative scale. Small mobile units, of varying degrees of intelligence, are able to do damage to larger, unwieldy units that are inevitably vulnerable.”

Soderbergh’s production phase ballyhoo isn’t, by itself, any more interesting than Robert Rodriguez’s run-and-gun schtick, but becomes so because, as in the case of Preminger, it accords to results, being happily at the service of a fiercely independent producer-director with an exciting film sense who is pushing a product superior to the big corporate concerns. As has often been his practice, Soderbergh is in one-man-band mode here: he shot the film under his tried-and-true DP pseudonym “Peter Andrews,” and cut it as “Mary Ann Bernard.”

Following an established pattern in his genre work, Soderbergh melds the high-tech and the old-fashioned—as in Lucky Logan, he is working to outflank an overhead-burdened, tentpole-dominated Hollywood with spry mid-budget material in the action/thriller mold. The script, by Jonathan Bernstein and erstwhile Spin editor and Guided by Voices bassist James Greer (it is unclear if the film’s title has anything to do with the New York noise rock trio with which Greer no doubt is acquainted) brushes on headline topicality. Aside from Leonard’s clammy creep, a hulking beardo milquetoast who self-defines as a moony nice guy romantic before proving himself fully capable of snapping someone’s neck with his bare hands, the unseen-but-omnipresent villain of the piece is a rapacious pharmaceutical industry that keeps Highland Creek supplied with fresh Fentanyl junkies, selling them the affliction on the outside and the cure on the inside. Former Saturday Night Live player Jay Pharoah, loose and appealing, appears as a recovering addict, an unusually well-composed fellow inmate who breaks down the lay of the land for Sawyer—the clinic is essentially operating an extortion racket, kidnapping unsuspecting men and women in distress and then keeping them under lock and key for as long as their insurance providers keep paying the shakedown money.

Pharoah’s character, as it transpires, is in fact an undercover journalist who’s checked himself into the loony bin to chase this very scoop. The trope, or a variation on it, is one that may be familiar from some fine cheapies of yesteryear like Sam Fuller’s Shock Corridor (1963) or Budd Boetticher’s Eagle-Lion Films production Behind Locked Doors (1948), while the staging of Sawyer’s harrowing first night in lockdown suggests that somebody might have been watching Val Lewton/Mark Robson’s Bedlam (1946), and the movie’s postscript, in its treatment of the perilous aftershocks of female trauma, echoes the pilot episode of Alfred Hitchcock Presents. An independent operator like Fuller or a low-rent outfit like Eagle-Lion provide good points of comparison to how Soderbergh is conducting himself here, of late having taken to operating like a one-man Poverty Row studio with the same priorities of low cash outlay, cheap thrills, and fast turnaround: Unsane was shot in two weeks and edited during the shoot, and his next project, High Flying Bird, is already in the can.

As Soderbergh, in his mini-mogul practice, endeavors to hack out new routes leading around the established economic order of filmmaking, his films depict men and women doing their best to negotiate contingency plans for the perilous environment created by a carnivorous economy on the prowl. In the case of Unsane, Sawyer is at the mercy of a system entirely unconcerned with her well-being—this encompasses not only the strong-arm tactics of for-profit healthcare, but the unbalanced dynamics of sex and power as they exist in the working world. Sawyer is introduced as a cubicle jockey bank loan analyst at an anonymous office. Her boss praises her unusual efficiency when bringing her into his office for what’s supposed to be a pep talk but looks more like a brazen pass, and this is hardly the first time that just doing her job has put Sawyer in the path of a guy who’s bad news. It was while working in hospice care that she first came into contact with her stalker, as depicted in an extended flashback, queasily funny in its depiction of saccharine obsession. Way back then, brimming with the milk of kindness, Sawyer wanted to do something that would help other people.

As she first appears in the present tense of the movie, Sawyer is very far from this Samaritan. For reasons not immediately evident, she is surly, solitary, and on-edge, though she is seen broadcasting falsely cheerful tidings to her mother back home in lunch hour Skype chats. These scenes offer a depressingly familiar rendering of the life of the alienated, unmoored, and isolated young professional, right down to the sad lunch salad in a clear plastic carton and the arbitrary, over-practiced pickup lines on a Tinder date. But the fact that there’s something wrong with Sawyer that’s more than garden-variety corporate-park anomie becomes clear when she brings her date back home and, before they can get down to business, flings herself bodily against the wall of her apartment before scuttling, terrified, into her bathroom.

Not long after this, the prim, self-possessed Sawyer finds herself spending the night in lockdown, sharing the space with a cast of characters who’d be unlikely to get along in her starchy but purportedly sane white-collar world, including a braid-wearing, shank-brandishing cot neighbor, Violet, played by Juno Temple with a savage, snaggle-toothed hiss. The experience of Sawyer’s unexpected institutionalization, which proceeds with a sense of mounting helplessness and panic, locks into her perspective, though even before she goes into stir, the movie establishes an off-balance, queasy visual scheme. Soderbergh is working largely with nubby lenses that warp the image with barrel distortion, making anyone seated before the camera seem to stretch and loom as though pulled like taffy, and rendering what would normally be unimposing interiors as chilly and cavernous—the institution’s cafeteria reads as a gaping gulf from which an isolated Sawyer regards her fellow captives as from across the Grand Canyon. These shot-reverse shots from the observer to the observed, frequently cut right along the 180 axis, are central to the movie’s visual schemata, and when Sawyer is incorrectly dosed, knowingly and maliciously, we get both sides at once, a double-exposure overlaying Foy’s face and back of head as she slips into hyperactivity and gibbering hallucinations—the scene recalls the back-of-skull-mounted reeling treatment of André Holland’s drunken brawl in an episode of Soderbergh’s Cinemax series The Knick (2014-15).

Further connections to other entries in Soderbergh’s sprawling body of work aren’t hard to locate—most obviously there’s Big Pharm alarmist psychological thriller Side Effects (2013), though Soderbergh’s interest in finding cinematic means to describe mental disquiet and the Kafkaesque nature of contemporary experience goes at least as far back as, well, Kafka (1991). Narrative improbabilities abound in Unsane, but these mostly work in the interest of the is-she-or-isn’t-she game the movie plays with its harried, suspected-mad main character.

Unfolding events seem finally to vindicate Sawyer, proving that her fear of being gaslit is no mere paranoia. On its surface such a story might be deemed a timely one for the #MeToo and “Believe Women” era—though Unsane’s prickly protagonist, played by Foy with some pathos but little concern for likeability, is much too difficult a character to function as an embodied slogan. Sawyer is as tough and callously resourceful as the movie in which she features, fully willing to sacrifice a sister-in-captivity in order to save her own ass. When Sawyer is introduced, she rebuffs a female coworker’s attempt at a moment of “You go, girl” bonding over her curt treatment of an unqualified loan applicant on a phone call—the rejected party, Sawyer is quick to correct, was a woman. Later she’ll run her own gauntlet of bureaucratic indifference in a clinic whose largely female staff is less actively malicious than overextended, underpaid, and indifferent. (One exception is Aimee Mullins’s actively obstructive higher-up, a kind of prim, ever-poised opposite number to Sawyer.)

Once we arrive at the cage-match meeting between Sawyer and her indefatigable admirer in a bright blue rubber room, Unsane begins to resemble a horror film—a particularly nasty one, at that—and Sawyer the figure of the Final Girl. She gets through her ordeal by using the same cool-headed professionalism and latent capacity for cruelty that is first visible in her in the workplace environment, the same environment to which she has returned in the film’s closing scene, which finds Sawyer basking in the glow of a new promotion. Born again hard through struggle, she is a survivor, and seeing her back in her natural element we have a sense that she will go far. It may not be much of a life with all that’s been lost, but it will be a brilliant career.