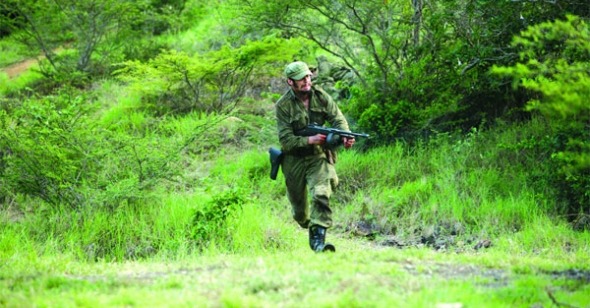 Forget the anxiety of influence: Steven Soderbergh’s anti-epic Che is haunted from first frame to last by the anxiety of legend. Against the unshakable confidence exhibited by his subject, Soderbergh evidences a conspicuously nervous and hesitating appreciation of Ernesto “Che” Guevara. This approach likely results from such a project’s unavoidable confrontation with the pop culture legacy of Che, as exemplified by the multiple generations of college-aged (very) would-be revolutionaries commodifying their dissent by sporting classic Chewear (featuring That Photo), likely manufactured in some third- world sweatshop. There’s probably no other 20th-century political figure, and symbol, as widely recognized and less understood than Guevara, and the gap between image and person is so wide that Soderbergh’s seemingly courageous decision to address it by being oblique and indirect leads him to the very place he wishes to avoid: mystification.

Soderbergh has spent so much of his filmmaking career creating a body of work more theoretically curious than experientially rewarding that it comes as no surprise that the back story to the production and exhibition of Che—the title of the four-hour-plus (with intermission) diptych of disparate jungle warfare actioners The Argentine and Guerilla—threatens to overshadow the actual content of the film. Not only do we have to contend with the special circumstances of Che’s release, both in the “road show” version referred to above and as separate films, but we have to take into account its place as the first ever film to employ the Red One, a digital camera with the build of a 16mm that’s able to anamorphically capture widescreen compositions. As with Soderbergh’s experiments with new technology and marketing strategies for Full Frontal and Bubble, the bells and whistles of Che fail to redeem a less than groundbreaking result.

What makes Che remarkable is how it so accurately, and often boringly, mirrors the developmental and procedural interests of Soderbergh, who has stated that he wanted to make a film about Guevara “because I am fascinated by the technical challenges that go along with implementing any large-scale political idea.” Opening with a color-coded, animated map of Cuba that portends the point-by-point fastidiousness of the story to come, part one of Che very quickly settles into a didactic war movie—a combat film by way of a Marxist survival handbook. Che eschews a psychological (or any other type of) explanation of its protagonist: for example, instead of building up to the first meeting between Guevara (played with signature cool by Benicio del Toro) and Fidel Castro (Demian Bichir) in Mexico City in 1955 by way of Che’s formative encounters with politics, Soderbergh and screenwriter Peter Buchman (working from “Reminiscences of the Cuban Revolutionary War”) thrust the viewer immediately into the gestation and then execution of the Cuban Revolution with only a brief flash-forward (Guevara’s defiant 1964 appearance in New York for a speech at the UN) to set the scene.

Shot in grainy, documentary-like black-and-white, the follow-up interludes of the NYC tour tease with overtones of an iconic, star-making victory lap, especially in its overt allusions to Dont Look Back, but the audience is pushed away, paradoxically, by being brought in too close—Che’s physical presence is offered to our gaze as if under a microscope. In contrast, and as an oppositional extreme, the Cuban Revolution unfolds from a distance, and the narrative adheres more to facts than dramatics. Che often melds into the collective body of revolutionary guerillas with whom he initially serves as a doctor before leading as Commandante, and Soderbergh frames the action in smooth, panoramic sweeps that temper the heroic individualism of the biopic conventions promised by Che’s title. Issues of military strategy and, once the revolution climaxes in Santa Clara, urban warfare take precedence over Che’s personal journey, though Buchman makes sure to touch on enough demonstrations of the many sides of Guevara (Che as doctor, Che as teacher, Che as friend to the poor) so as to prevent Soderbergh’s study from toppling into pure alienation effect.

As dispassionate and process-minded as The Argentine is, Guerilla (shot in a less rectangular aspect ratio and with more handheld camerawork) is where it all goes wrong, not just for Che, but for Che. Headed down a one-way street toward death, Guevara’s disastrous Bolivian adventure advances in purely linear fashion without the time shifts and contrasted milieus of the first half, and Che must submit to an even more rigorous deconstruction of his identity. Soderbergh’s cinematography (under regular alias Peter Andrews) consistently shrouds Guevara in complete shadow, making him a ghostly silhouette. It’s a Corleone lighting scheme without the dramatic or thematic heft—Guevara has by now almost completely moved to the periphery of the narrative. As Guevara’s control weakens and the walls close in, the warm verdant tones of The Argentine turn into the muddy slog of Guerilla, and while it certainly shouldn’t be an enjoyable viewing experience to witness a futile and crushed rebellion, it also shouldn’t be so damn dry. Whereas The Argentine follows the romance between Guevara and eventual wife Aleida (Catalina Sandino Moreno) by portraying subtle behavior details and ellipses of their developing closeness during the chaos of battle, Guerilla leaves nothing to the imagination, even as it gives us only the faintest outline of historical events, especially in providing any kind of context for the failure of Che’s revolution to win over the peasants of Bolivia.

In fact, even at its epic length, Che as a whole feels like an outline. A suspicion arises that there could be more to these dual stories, not only in the depth that Soderbergh intentionally refuses because of the nagging specter of a pandering Che hagiography, but in the ignored historical record. When asked by Film Comment about eliding the Che-approved executions that occurred after the revolution’s triumph, Soderbergh replied, “There are anti-Che people who would not be satisfied no matter how much barbarity we depicted. Do I think all the people who were executed were guilty? No. Do I think that they were all innocent? No. Does every regime when it feels threatened at some point act excessively? Yes. The firebombing of Japan? The dropping of a second atomic bomb? I think those are excessive. I think those are on a par with the kind of thing we’re talking about.” Soderbergh’s defense—American militarism, unoriginally, provides his only examples—is fairly disingenuous, if not outright arrogant, in its moral equivalency. So “every regime” has broken the rules—why not show this particular instance? For all the film’s emphasis on the nuts and bolts of revolutionary combat and all its attempts to bring Guevara’s legend back to earth, Che is in Soderbergh’s vision ultimately still an untouchable.

Che occasionally presents startling moments: a nighttime attack on a jungle outpost, accompanied by a voice-over English translation (nearly all of the film is spoken in Spanish) from Guevara’s writings elucidating the definition of true military strength as espoused in War and Peace, is probably the closest Soderbergh comes to a visual and atmospheric Zen-like view of human conflict. Yet, as is becoming the norm with Soderbergh, Che ends up affirming only its conceptual novelty. Just as The Good German drowned its revisionist portrait of postwar Berlin in ironic pomo studio-era style, and just as Bubble condescended to its nonprofessional actors by merely pretending minimalism, so does Che fail its subject by second-guessing aesthetics, reducing Guevara’s exploits to a diagram so that the man can fit into the limited range of its director’s latest exercise.