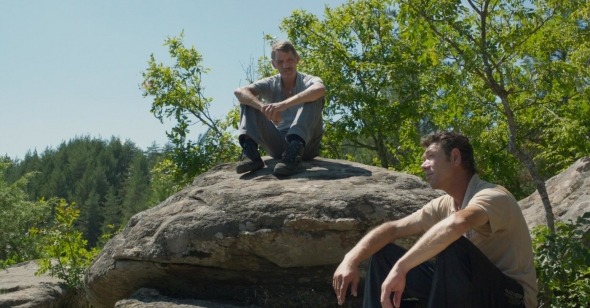 Oh, Give Me a Home…
By Daniel Witkin

The first thing you should know is that Western is not really a western. Valeska Grisebach’s film draws upon the genre’s iconography and mythos, but to take the comparison further requires wishful, willful thinking, an act of projection that the filmmaker cannily encourages and exploits. Much of this is driven by the physical bearing of the film’s lead, Meinhard, portrayed by “non-actor” Meinhard Neumann. With jutting cheekbones and a pronounced chin, his visage has the sort of bony definition one might find in a Northern Renaissance painting, its craggy austerity tastefully balanced by Neumann’s bushy mustache. Throughout the film, numerous characters will be drawn toward our hero’s mug, perceiving in it both a danger and a heroic aspect that may or may not be there, and it’s seductive for the viewer to do so as well. If we’re never quite sure what’s truly behind that formidable face, he might not be either.

Meinhard is a member of a team of German workers, on assignment in Bulgaria for the construction of a hydroelectric dam. The team sets up a makeshift camp, set apart from the local village, hanging a German flag in full awareness that such a gesture might not sit well with their hosts. Meinhard is treated with muted suspicion by his boss Vincent (Reinhardt Wetrek), who further stokes tensions when his bitter attempt to flirt with a local woman quickly spills over into outright bullying. Withdrawn and aloof among his coworkers, Meinhard begins hanging out with some game locals, most notably Adrian (Syuleyman Alilov Letifov), with whom he strikes up a genuine friendship.

Relying on a painstaking casting process and the director’s preparatory immersion in rural Bulgarian life, Western took time to come together. Still, Berlin School director Grisebach has stayed busy in the years following her previous feature, Longing (2006), notably helping to produce Maren Ade’s Toni Erdmann (2016). Western is in many ways of a piece with Ade’s film; both deal with Germany’s economic relationships with its European neighbors, and both bring genre elements into an unassailably seamless naturalism that’s not nearly as offhand as it appears. The general premise of Grisebach’s film recalls the extended scene in Ade’s where the protagonists briefly take leave of monochromatic Bucharest and visit the verdant Romanian countryside, where we see firsthand the results of their corporate machinations. Despite a fine turn from Vlad Ivanov, it’s the weakest scene in that otherwise exquisite and hilarious film, handling the interactions between the locals and interlopers relatively clumsily and almost reprovingly spelling out the film’s themes. By contrast, Grisebach is keen to let her characters’ relationships develop organically rather than use them to act out the workings of the globalized economy, building toward something more intimate and indeterminate.

The western traditionally thrives on studied oppositions, and Western does as well. Instead of cowboys and Indians, the brothel and the church, Grisebach juxtaposes the camp with the village, technical with agricultural skills, and the chilly, masculine mealtimes of the workers with the warm familial gatherings of the Bulgarians. Meinhard is the one who begins to cross these boundaries, activating them as he does. One night, he’s abandoned by his coworkers and hitches a ride home with the locals. Struggling with the language barrier, he claims to have been a member of the Foreign Legion. Perhaps because of his exoticism and formidable bearing, his story is accepted with remarkably little resistance. Later, while driving around with Adrian, he calls his surroundings “Paradise.” The latter replies in Bulgarian: “We understand each other.”

But do they really? The language barrier presents a persistent source of tension and ambiguity throughout the film. Despite his warming relationships with the locals, Meinhard only bothers to learn a handful of Bulgarian words, which eventually find their way into his German speech. Instead, the viewer has to scour his interactions to discern how much our protagonist has actually been able to convey, and how much he has understood. As the film progresses, the stakes of incomprehension begin to rise. Meinhard intrudes upon a run-in with local authorities—or mobsters, it’s tough to tell. At one point, he wins too much from a local man at poker. As these situations multiply, so does the likelihood that something might go decisively, tragically wrong.

Yet Grisebach builds a double suspense. Unlike in a traditional genre piece, the unease is rooted in harmony no less than conflict. Some of the film’s most effective scenes consist of little more than people languorously enjoying each other’s company. Meinhard and his Bulgarian neighbors both seem to be genuinely decent, and we don’t wish to see their friendship rent asunder by either linguistic or national barriers. For all their goodwill, both the Bulgarian and German men abide by a pronounced hypermasculine code. Male bonding can bring people together, but after awhile the shared postures that bring them together also threaten to tear them apart. Meinhard’s claim of prior membership in the Foreign Legion is telling, giving voice to his aspiration to a sort of macho cosmopolitanism, but one’s that’s firmly rooted in force. Meanwhile, Meinhard and Vincent’s antagonism steadily builds.

Grisebach takes evident pleasure in framing Neumann’s lanky body against the intense greens and blues of the Bulgarian countryside. He cuts an especially impressive figure when mounted on a white horse, one of the film’s most explicit genre references. She’s similarly orchestrating and framing groups as well. A crepuscular funeral scene for an unlikely character is executed with a Fordian grandeur. Meinhard, Adrian, and a few friends orbit each other and the camera, sharing grief and support. It’s an uncommonly powerful representation of sympathy, despite the fact that very little is actually said. In this way, body language does much of the heavy lifting throughout the film, with Meinhard’s posture, abetted by Grisebach’s able mise-en-scène, telling a story that the man himself either won’t or can’t.

After steadily teasing the viewer with potential catalysts for a more conventional narrative that never quite manages to coalesce, Western delivers a payoff of sorts, which both clarifies and distills its themes and raises its stakes. The insinuating, elliptical editing is subtly accelerated and heightened, building scenes to sudden, almost violent conclusions. We leave Meinhard at his most vulnerable, his place amidst people uncertain even as he’s surrounded by them. He’s not an iconic western hero in the way they’re remembered in pop culture’s collective unconscious, but hey—neither were most of the protagonists of Hollywood’s great westerns. Grisebach’s film isn’t about white horses and black Stetsons, but something more elemental to the genre: the impossible dream of a simple life.