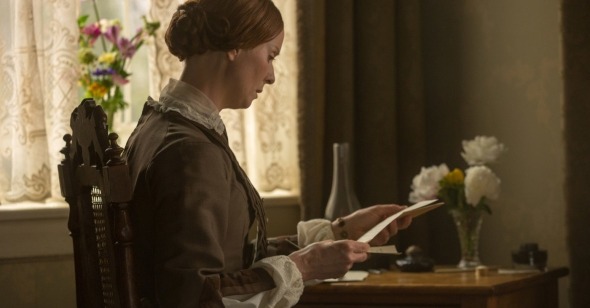 I Felt a Funeral, in My Brain
by Nick Pinkerton

A Quiet Passion, Terence Davies’s long-planned biopic of Emily Dickinson, takes place almost entirely in the home and on the grounds of the residence in Amherst, Massachusetts, where the poet lived for most of her days. Only three times does the film stray far from the Dickinson homestead, the exteriors of which are shot on location at the yellow brick house in Amherst that now serves as the Emily Dickinson Museum, while interiors were done in a reproduction in Belgium. The first is in the opening scene, which finds a young Emily (Emma Bell) at the Mount Holyoke Female Seminary where, standing alone after failing to identify her “indefinite” self with either the saved or the yet-to-be-saved among her classmates, she is given a public browbeating. The second is an imaginary trip to the battlefields of the Civil War, seen in hand-tinted photographs accompanied by casualty counts. The last is Emily’s final voyage to the cemetery, struck dead while still waiting for life to begin.

For the better part of the film, Dickinson is played by Cynthia Nixon—the baton is handed off in a coup-de-cinema moment when members of the Dickinson family are individually sat for portrait photographs and Bell’s visage morphs into that of Nixon. The pose struck will perhaps be familiar, for it is that which Dickinson assumes in the single extant photographic record of her as an adult, a daguerreotype taken at Mount Holyoke, rather somber and serious and generally in keeping with Dickinson’s typically grammatically eccentric description of herself in a letter to Thomas Wentworth Higginson: “Small, like the Wren, and my Hair is bold, like the Chestnut Bur—and my eyes, like the Sherry in the Glass, that the Guest leaves.”

Davies, however, doesn’t accept either this decorous photo or this self-deprecating description at face value. The Dickinson that he, Bell, and Nixon conjure up is to be sure prone to dark moods, increasingly unshakable as the film progresses and her sorrows mount, but when first encountered she is a vivacious woman, possessed of a quick and often stinging wit which she takes pleasure in freely exercising, which she has ample opportunity to do when back in the loving bosom of the Dickinson home, where slashing and parrying with words is a favorite family pastime. For long passages the film is close to a drawing room comedy—for example the visit of Reverend Charles Wadsworth and his ludicrously priggish wife (Eric Loren and Simone Milsdochter), too abstemious to take even a glass of lemonade, which gets much good business from the clinking of a tea set, deafening in the silence—and even once the wordplay has slowed, the choice of le mot juste remains a matter of utmost importance to Emily, the whole substance of her being wrapped up in the fine differences between “life” and “routine,” “despair” and “bitterness,” “clarity” and “obviousness.”

Though Dickinson had ambitions for literary fame, as we see, her family sphere was quite literally her world, and in setting out to make a film about the life of a woman who was for all practical purposes a shut-in, Davies has honored the enormous gravity with which she viewed the events and personages that made up her domestic sphere—“I can’t imagine myself beyond my family,” as she puts it. (Here it occurred to me that if Davies hadn’t made the definitive Emily Dickinson movie, Chantal Akerman could have.) Each figure is placed in her or his proper proportion, which is to say enormous, and every little domestic squabble or rebuke—though far less brutal than one who is familiar with Davies’s films might be accustomed to—takes on an import that dwarfs the tectonic goings-on in the wider world. The appearance of the Civil War battlefields is an awkward divergence from Davies’s singular concentration on the homefront, but he is giving us the war as Emily would have received it in Amherst—in still images and letters. (Everything about this digression is willfully “wrong,” right down to the visible bit of fishing wire that props us both stars-and-bars and stars-and-stripes.) And what, after all, is a Lincoln, compared with the enormity of patriarch Edward Dickinson?

Father Edward is played by Keith Carradine; her mother, stricken by a vague ailment, by Joanna Bacon; her younger sister, Vinnie, and elder brother, Austin, by Jennifer Ehle and Duncan Duff, for the better part of the film. (The actors playing the Dickinson siblings occupy the roles over a period covering some 25 years, and are markedly too old when they first appear, but this is an intrinsic hazard of such an undertaking, and by no means an insupportable dramatic liability.) There are a few gentleman callers, but the greater part of Dickinson’s circle is female, including her sister-in-law, Susan (Jodhi May), who steals over from the house next door to commiserate with Emily during the early morning hours that she sets aside for writing, and Vryling Buffum (Catherine Bailey), a local girl who thrills Emily with her aphoristic impieties, the brilliant friend through whom Emily lives vicariously, as she lives through the novels of the beloved Brontës and her own poetic imaginings.

The film is at times antic with bright talk, this sharing the soundtrack with voice-over readings from Emily’s writing, though the chatter quiets and dims as Emily grows older, as she passes through a litany of events which she receives as tragedies: the death of her father, the departure of Reverend Charles Wadsworth, the marriage of Miss Buffum—for as Emily perceives all too well, for a woman to marry is to forsake any claim that one has to one’s self, a property that she guards jealously. Upon the death of her mother, the burden of melancholy always evident in her passes to her eldest daughter, and from here on Emily delimits the dimensions of her life still further, making a redoubt of her bedroom, from where she will receive guests in the foyer, an unseen, disembodied voice speaking from her room above.

As the beleaguered female protagonist of Davies’s last film, Sunset Song, finally discovers, the only victory in a hopelessly compromised social world comes in fiercely defending the interior life, and the inalienable private pleasures that it offers. As Emily cloisters herself, her imagination grows still bolder, and Davies gives us her luxurious vision of a faceless suitor crossing the threshold of her home and, in sensual slow motion, ascending the stairwell, seen from on high and filling the wide screen. More often Davies’s framings work in close, enormously attentive to Emily’s mood swings, which at a moment will take her from wild-eyed castigation to disgust at her own assumption of superiority. The Dickinson he gives us is a woman strapped to a pendulum that is constantly swinging between megalomania and self-loathing, one minute introducing herself as “Napoleon” and imagining her legacy in the world of letters, the next demeaning herself as a “kangaroo” or worse. As performed by Nixon, these hard shifts never feel less than the spontaneous manifestations of a conscience that is a merciless minder, and perfectly true to the existence of most creators of the first class. (Think of Robert Hughes: “The greater the artist, the greater the doubt. Perfect confidence is granted to the less talented as a consolation prize.”)

Among the topics that preoccupy Emily is the question of her posthumous reputation and the thought of her own death, which even as a young woman she is seen to discuss with gusto with a visiting aunt (Annette Badland), a fly discreetly buzzing past as they do so. (Or is it a prowling bee?) Accordingly, the stages of her decline, from her diagnosis with Bright’s Disease to her last tremor, occupy a privileged place in Davies’s construction, though not dwelt on with quite so much doting attention as Albert Serra does in his The Death of Louis XIV, a film whose monomaniacal, monotonous materialism strips the event of all meaning beyond physical rot. (As regards Serra, see the Hughes quotation above.)

There’s probably a think piece to be got out of these deathbed vigil movies—something about the decline of the medium…why not?—though for my money A Quiet Passion is more profitable when put in dialogue with the other big English-language poetry movie of the year, Jim Jarmusch’s Paterson. Set in a contemporary Paterson, New Jersey, Jarmusch’s film is haunted by the specter of William Carlos Williams and The Dial, and their legacy of thinking about the relationship between culture and society—but to even contemplate such a relationship would have been a luxury for Dickinson. The polarity that defined the existence of a female of Dickinson’s time and class is that between the spheres of women and men, between shelter and lived experience. Emily’s bind is that she has no way to enter even gingerly into the world of experience without the protection conferred by a husband, while she knows full well that taking a husband would mean the end of her creative life—an endeavor which, without experience of the wider world to nourish it, must instead try to locate the universe in minutiae, in the microcosm of a small, beloved family community and a self-regard that almost inevitably veers towards morbidity. It’s an impossible dilemma that Emily and the women of her circle—no passive dupes—see all too clearly, and from this perspective her withdrawal from the world and her sabotaging self-slander can be seen a defense mechanism, a bulwark against her own powerful, consuming desire, the fulfillment of which poses the greatest threat to her continued ability to write.

A Quiet Passion proposes the outwardly unspectacular life of Emily Dickinson not as the story of a no-hoper spinster but as an act of courage, a woman’s struggle to overmaster herself, to sacrifice her own life (and preserve her maidenhead) so that her work might live. The agony of the effort is stamped onto Nixon’s face, and the film’s drama is wrapped up in her internal tug-of-war, her effort to convince herself that it’s all worthwhile, for as she herself pronounces, “Rigor is no substitute for happiness.” For Davies, Dickinson appears as a figure no less valorous than the battlefield dead, and in many ways words outstrip deeds—while the Gettysburg Address, referred to in passing, insists that “the world will little note, nor long remember what we say here, but it can never forget what they did here,” history has proven this dead wrong.

Emily is both a product of her time and at odds with it, but watching Davies’s film it is impossible to imagine her as “born too soon.” Her creative output and the world that forged it are inalienable from one another, and Davies knows better than to try to resolve this holistic whole from a position of contemporary smugness, like a physician diagnosing a now-common cure to a once-exotic ailment. Emily’s affliction is life, and it is fatal. At the end of her reverie, that dream of a man ascending the stairs, we return to find her hollow-cheeked and sitting straight-backed in her room, where the door closes on her like the lid on a casket—and when she goes to the cemetery, it’s to the sound of her lyric, “My life closed twice before its close.” Here, with the all wordplay over, there is the final question as to what we should call this: tragedy or a triumph?