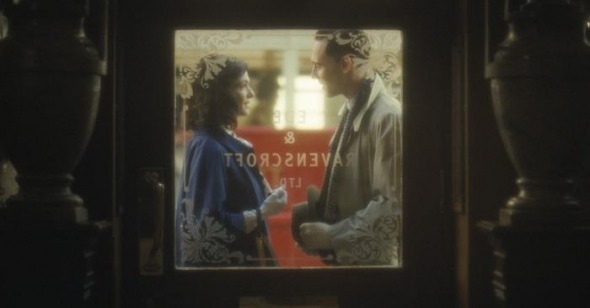 The Agony and the Ecstasy
By Michael Koresky

It‚Äôs clear from the first images of The Deep Blue Sea that we‚Äôre ensconced in Terence Davies territory. This is not only because of the title card that informs us of the era and city‚ÄîLondon, around 1950, immediately conjuring the postwar British milieu of Davies‚Äôs autobiographical Distant Voices, Still Lives and The Long Day Closes‚Äîbut more importantly because of the sensuous camera movement that directs our attention to the surroundings. In a lusciously slow drift, it tracks back from the mysterious, charred husk of a collapsed building, unreconstructed presumably since the war, and then cranes across a quiet city street and up to the window of a townhouse, out of which stares our protagonist, Hester Collyer (Rachel Weisz); Davies then cross-fades to inside the flat, Hester‚Äôs back to the camera, her dark figure silhouetted by the street lights streaming through the curtain. It‚Äôs more than a touch reminiscent of the breathtaking opening of The Long Day Closes, in which Davies very deliberately glides through a rainy Liverpudlian nightscape, from a sad, dilapidated alleyway and on into the wide-open maw of a house long abandoned; a dissolve to a young boy sitting on the house‚Äôs staircase in brighter days gone by triggers the past, clearly a memory. Here, too, Davies uses the gradual camera movement and dissolve to ease us into a liminal space that‚Äôs neither past nor present, but rather a psychological plane that incorporates both simultaneously. Davies announces that we are not only journeying into Hester‚Äôs home, but into Hester herself, her mind, her fears, her dreams, and most importantly, her desires.

For what‚Äôs most wondrous about his latest film is Davies‚Äôs subtle recalibration of his source material, Terrence Rattigan‚Äôs 1952 play The Deep Blue Sea, into a profoundly felt, even liberated, tale of feminine longing. This film was commissioned by the Sir Terence Rattigan Charitable Trust to commemorate the centenary of the playwright‚Äîthe director often relies on various forms of organizational underwriting, as he‚Äôs famously found it difficult to get his films made‚Äîyet it‚Äôs not a blindly faithful tribute. In adapting Rattigan‚Äôs work, Davies decided to tell it strictly from Hester‚Äôs point of view, in the process doing away with all the exposition that marks the first act. Like the play, Davies‚Äôs narrative begins with the attempted suicide of its heroine (and in this sense makes it the structural inverse of Davies‚Äôs most recent period drama, The House of Mirth), but it‚Äôs told in dramatically different fashion. As written by Rattigan, Hester‚Äôs gas-poisoned but still-breathing body is discovered and fussed over by her housekeeper and neighbors, who proceed to explain the possible motives behind what she‚Äôs done by supplying the backstory: she has left her wealthy magistrate husband, Sir William Collyer (Simon Russell Beale), for a much younger man, Freddie (Tom Hiddleston), a former pilot in the war with whom she currently resides. Davies jettisons the talk surrounding all this, letting all the pertinent information instead to seep out in fragments and shards. Davies‚Äôs first act is wholly cinematic, a tour de force of achronological, sumptuously detailed and colored imagery set to Samuel Barber‚Äôs overpowering ‚ÄúConcerto for Violin and Orchestra, Op. 14.‚Äù Smudgy and impressionistic, fading in and out of time and space, the elongated prologue firmly establishes Davies‚Äôs vision of Rattigan‚Äôs story as one of a particular interiority: brief illustrations of melancholy and romance, guilt and eroticism, pieces from various moments of Hester‚Äôs relationship with Freddie and her husband intermingle in an exhilaratingly realized, traumatized mindscape. Snatches of conversations drift in and out of consciousness (‚ÄúI survived the battle of Britain!‚Äù ‚ÄúYou‚Äôre most attractive girl I‚Äôve met‚Äù); the camera swirls and swoons, and it feels so close to Hester it's as though it‚Äôs been brought inside her beating heart. The first concrete action of the film is when Hester is slapped awake.

Thus begins a narrative in which Hester will slowly come to the realization that she will need to slap herself awake. A major tension driving The Deep Blue Sea is whether or not Hester ultimately has the wherewithal to stop herself from becoming a tragic heroine (‚ÄúIt‚Äôs sad perhaps but hardly Sophocles,‚Äù is uttered at one point). Weisz, who brilliantly toggles between seeming like a wraith drifting through her own narrative and a full-blooded woman of fierce independence and sexuality (in one memorable expression of intimate abandon, she licks Freddie‚Äôs shoulder), embodies that tension to searing effect. Early scenes of Hester chafing at the bonds of repressed British society, symbolized in a royally awkward dinner with her mother-in-law (Barbara Jefford) who ominously sets up one of the film‚Äôs themes by stating ‚ÄúBeware of passion, Hester, it always leads to something ugly. Replace it with guarded enthusiasm,‚Äù establish our protagonist as an outcast of sorts. Hester‚Äôs unbridled and intense affair with the handsome, lithe, and severely damaged Freddie has been read over the years as a veiled metaphor for the ‚Äúlove that dare not speak its name.‚Äù This interpretation, though denied by the gay Rattigan, might prove irresistible to those placing it in the continuum of Davies‚Äôs works, as his more autobiographical features in one way or another deal with the resultant psychosis associated with his repressed homosexuality as an adolescent in 1950s England. Yet to project masculinity onto Hester (to insinuate that she‚Äôs really a gay man in drag) is take away her provenance as a female character en route to strength and enlightenment. As he proved in Mirth, Davies may identify with fragile women (like Hester, Lily Bart refuses to play by the rules of social decorum), but he also stops short of forcing his persona onto them.

Davies allows the two men who encircle Hester to epitomize exquisite vulnerability. Hiddleston‚Äôs Freddie is at once dashing and wan, given to fits of volcanic rage at Hester‚Äôs willful depression and romantic neediness, which often leaves her out in the cold. On the other hand, Beale delineates, with effortless and profound sensitivity, a man who refuses to emotionally wield the power he clearly has‚Äîhis Sir William is in a state of profound shock that his life of promised financial comfort has been rejected for reckless love, as well as for a hovel of an apartment; yet wounded though he may be, he does not exude anger, only a bruised, tried patience. Where Davies emphasizes the theatricality of the source material (much of the film often denies it for the more luxuriously cinematic) is in some of the staging between Weisz and her opposite suitors; in one extended sequence, he literally has Sir William make a play-like entrance into Hester‚Äôs flat mere moments after Freddie has stormed out in a fit. The heightened artificiality of the gesture calls to mind that sense of claustrophobic psychological space that the theater is so equipped to represent, as well as invokes Davies‚Äôs predilection for static, fussed-over mise-en-sc√®ne (many shots in The Long Day Closes and The House of Mirth, especially, have the feel of elegantly arranged tableaux).

In its soundtrack, The Deep Blue Sea especially achieves something quintessentially Daviesian. When the film stops cold for Hester and Freddie to dance to Jo Stafford‚Äôs ‚ÄúYou Belong to Me,‚Äù it doesn‚Äôt seem like a mere mannerism of the filmmaker. Though Distant Voices/Still Lives, The Long Day Closes, and his found-footage essay film on Liverpool, Of Time and the City, all employ pop music‚Äîrecords or pub sing-alongs‚Äîas madeleine-like signifiers of the lost continent of Davies‚Äôs domestic childhood (the memory of it haunted by the violent specter of his father as much as it‚Äôs graced by the warmth of his mother), here he uses standards not to evoke time gone by, but to speak for a character trapped in an idea of romance as much as the disappointing version of the real thing. The lyrics to ‚ÄúAnytime,‚Äù crooned here by Eddie Fisher, get at the melancholy inherent in Hester and Freddie‚Äôs affair: ‚ÄúAnytime you‚Äôre feeling lonely, anytime you‚Äôre feeling blue, anytime you feel downhearted, that will prove your love for me is true.‚Äù

Music wafts not just from the barroom but also from the underground: in a flashback to the war, a London neighborhood crams into the city‚Äôs tube tunnels during the Blitz, and the camera elaborately tracks past hoards of scared citizens summoning enough courage to sing the popular Irish anthem ‚ÄúMolly Malone‚Äù in unison. Here, Davies again intimates that the story could head in a tragic direction, as the song tells the tale of a young fishmonger who dies of fever. The wrenching beauty of the moment‚Äîuniting the terrors and hopes of a populace in wartime and a single woman‚Äôs own battle for survival against her own inner torment‚Äîtestifies to Davies‚Äôs particular brand of empathetic melodrama. This is Rattigan, but also Sirk; like all Sirk‚Äôs heroines, Hester‚Äôs stuck in a seemingly impossible situation. As the title implies, she is faced with two dreadful, constricting choices: but who represents the devil and who the deep blue sea? Is it Freddie and William? Or is it life and death? At the end, when Davies brilliantly reverses the opening camera dolly, bringing us back to where we started but completely changing the emotional tenor with the subtlest of cues, we have our answer.