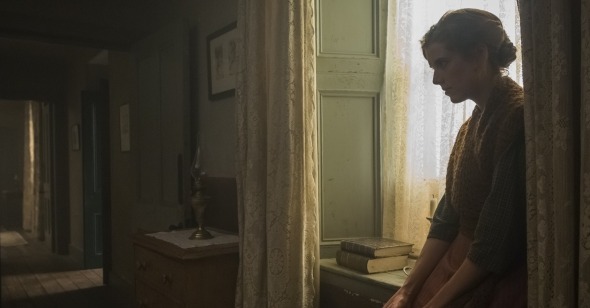 Love and Forgiveness
By Michael Koresky

At the beginning of the second chapter of Scottish author Lewis Grassic Gibbon’s 1932 novel Sunset Song, we learn of something unspeakable. The mother of our young heroine, Chris Guthrie, took her own life, as well as those of her two newborn children. Gibbon communicates this information in one terse sentence: “The June of last year it had been, the day when mother had poisoned herself and the twins.” There had been inklings of the woman’s depression near the close of the previous chapter, but nothing to predict such a brutal shock. Isolated on a forbidding farm with an abusive husband, subject to the daily wearies of unforgiving weather and soil, she was, as it turns out, not long for this world. Soon after this summarily related revelation, Gibbon writes of Chris’s response to her mother’s death:

“The child in your heart died then, the bairn that believed the hills were made for its play, every road set fair with its warning posts, hands ready to snatch you back from the brink of danger when the play grew over-rough. That died, and the Chris of the books and the dreams died with it, or you folded them up in their paper of tissue and laid them away by the dark, quiet corpse that was your childhood.”

Anyone familiar with the cinema of Terence Davies can easily see why such a book would appeal to him. In his forty years as a filmmaker—from 1976’s Children, the devastating autobiographical short destined to be the first installment in what is now called The Terence Davies Trilogy, to this year’s release of Sunset Song—Davies has been offering plainspoken poetry in the face of the grim specter. He attempted to exorcise the demons of his past with a succession of brilliantly fractured films (the Trilogy, Distant Voices, Still Lives, The Long Day Closes) that were direct reckonings with his Liverpudlian youth—his psychotic father; his tender, abused mother; his terrorized siblings; his own dreaded homosexuality; his conflicted feelings toward Catholicism—yet, he claims, he found no catharsis. Davies has moved on mostly to adaptations of literature and theater that have proved no less personal. Whether exquisitely refashioning John Kennedy Toole’s The Neon Bible, Edith Wharton’s The House of Mirth, or Terence Rattigan’s The Deep Blue Sea, Davies was clearly projecting himself into these stories, all of them about social outsiders. The Long Day Closes may be his most complicated and thorough vision of the experience of youth, its beauties and terrors, but one could see each of his films, and their preoccupation with the destruction of innocence, as a way of mourning for a childhood forever lost.

Sunset Song, Davies’s most linear work next to The House of Mirth, is largely faithful to Gibbon’s book, moving with inexorable sadness from one major family event to the next so that the film sometimes feels like a succession of vignettes. In rough outline, it’s a coming-of-age tale, following farmer’s daughter Chris (Agyness Deyn) from her teenage years to marriage and parenthood, her emotional and physical growth paralleling, sometimes explicitly in the film’s voiceover, the cyclical nature of the family’s harsh, lush land. Set in Blawearie, a fertile area in the fictional Kinraddie of northeastern Scotland, Gibbon’s novel features a lengthy prelude situating the reader in an at-times mythological version of the country, rapidly skipping through history, from the mid twelfth century to early twentieth. (Davies features a passage from this section, read aloud by Chris by candlelight, one of many clever ways he integrates Gibbon’s meticulous text.) Gibbon’s prologue would seem to place Chris in that continuum, granting her story the weight of legend, but the opening of the book Sunset Song is a brilliant misdirect of a sort, for Gibbon ultimately depicts this woman’s life as important because of its ordinariness. Chris is a marvel simply because she persists; she is a constant. Davies captures this central idea with an ever-growing power, allowing Deyn to convincingly flower from wide-eyed student to a strong-willed woman empowered rather than broken down by life’s disappointments. Yet as a story of female survival and sustenance, Sunset Song is equally about the cyclical, generationally inherited nature of male violence.

As is clear from the anguished scene of childbirth near the start of the film—which is no less disturbing for being heard rather than seen—the world Davies creates is a tumultuous one. We enter it screaming; all is toil, from our beginnings to our ends. For the film’s first half, life’s cruelties are largely personified in Chris’s father, played with tyrannical bearing by Peter Mullan, who seems to be almost subconsciously channeling Pete Postlethwaite, so unforgettably terrifying in his breakthrough role as the ferocious paterfamilias in Distant Voices, Still Lives. If Chris represents endurance, Mullan’s John Guthrie—harsh and unforgiving with his daughter, physically savage with his eldest son, Will (Jack Greenlees)—represents enduring brutality. At one point, refusing to respond to Will after he announces he has found work in nearby Aberdeen and will be likely leaving the family, John wordlessly lights his pipe, with Davies’s camera tracking in on his intractability and holding for an uncomfortable amount of time before he rises and leaves the room. The gesture recalls Postlethwaite’s refusal to share a drink with his son in Distant Voices, preferring instead to nonchalantly prod fireplace embers with a poker, his head turned from his child; the cruelty of silence. No further evidence is needed to bestow autobiographical significance on Sunset Song, a film in which one crawls out from crippling parental abuse only to be in the grip of a different kind of violence.

Stacked with scenes swift and terse and often visually static, the first half of the film flirts with the kind of austerity Davies managed to maintain so brilliantly throughout The House of Mirth (one of the only films of this young century that feels indebted to and perhaps the equal of Mizoguchi). Yet there are passages of joy that punctuate the film’s second half, particularly in the extended sequences depicting the courtship and eventual marriage of Chris and her beau, Ewan (Kevin Guthrie). For the committed Davies fan, this is where Sunset Song crystallizes, visually, as an unmistakable auteurist work, with compositions of light and shadow and a hypnotic succession of slow pans across quiet rooms that both move us inexorably through time and seem to make it stand utterly still.

A master of interior portraiture—think of those Vermeer-like shots of the mother washing dishes in The Long Day Closes, her face half-lit by diffused late-afternoon sun from some off-screen window—Davies opens out here, capturing the vast Scottish exteriors, in times of both summer verdure and autumn harvest, with widescreen epic classicism. Aside from some memorable, painterly moments from The House of Mirth, landscape images are mostly new for Davies, who has long preferred more everyday urban portraiture, a natural result of his working-class, Liverpool childhood. The exteriors of Sunset Song were shot on 65mm film, the interiors were captured digitally, and they offer different kinds of rapture, the former taking in the vastness of the land with hushed, God-like awe, the latter almost unbearably human, hunkering down in the burnished shadows of rooms sometimes lit by a single candle. (Davies says the images were inspired by the work of Danish painter Vilhelm Hammershøi, a master of plain, softly illuminated interiors, with human figures often turned away, looking out a window or finishing household chores.)

Davies signals a decisive break in his narrative with a centerpiece sequence of swelling beauty, following a group of Blawearie peasants as they walk across golden wheat fields and descend a hill to Sunday services at the local church. Davies allows the entirety of the sublime Scottish choral hymn “All in the April Evening” to play out, finishing with a forward tracking shot down the center aisle, ending on the pastor at his pulpit as a shaft of sunlight emanates from the windows, flooding the room. To Davies, the lapsed Catholic and ever the religious skeptic, this is hardly the light of truth, however. The parishioners are now subject to a sermon encouraging war, calling on all the townsmen to enlist in the country’s impending conflict with Germany, dubbing Kaiser Wilhelm II the “Antichrist,” and threatening to tag those who do not engage as cowards. From this point forward, Sunset Song is a war film, as brutal as any despite the fact that it mostly stays on the home front and from Chris’s ever patient, if increasingly mournful perspective.

Davies, who has often spoken of the frighteningly abusive home life of his childhood, has stated in interviews that he abhors sensationalized screen violence; nevertheless he has made a violent film here, even if the blood is kept largely off-screen. In the film’s final third, there is a scene of rape that is shot discreetly, and is all the more powerful for it; Davies’s unorthodox decision to feature the man nude and the brutalized woman clothed somehow makes the attack even more animal. The depiction of the evil that men do, however, is all the more powerful for the forgiveness that Davies’s protagonist shows in its wake. In the film’s daring final passage, the point of identification and chronology slightly alter, and Davies offers the kind of forthright emotional clarity that exists wholly outside the trends of contemporary cinema, and which is perhaps more passionately charged than the director’s previous films ever dared. Chris endures, and her sorrowful love and Christ-like forbearance grant the film a humane, earthbound spirituality that Davies’s atheism might otherwise not allow for.