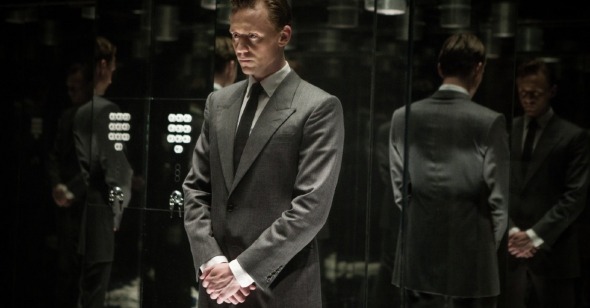 Ben Wheatley‚Äôs High-Rise bowdlerizes a queasily mesmerizing piece of fiction into dystopian nostalgia; apparently even the apocalypses were sexier in the 1970s.

With screenwriter Amy Jump and producer Jeremy Thomas, Wheatley has adapted a slim 1975 novel by J. G. Ballard; Thomas, who has a producing credit on David Cronenberg‚Äôs 1996 film from Ballard‚Äôs Crash, has apparently been keen to make a movie of High-Rise for decades now. The novel concerns the descent into anarchy by the residents of a 40-story high-rise tower block that is something like a freestanding city, with the calm center of this storm the unflappable Robert Laing (the suggestion of the architectonics-minded director of 1927 caste-struggle classic Metropolis, Fritz Lang, is not entirely accidental), a teacher at a local medical school, played in the film with an aura of impervious detachment by Tom Hiddleston.

When High-Rise first appeared it was hailed as a prophetic response to the changes occurring in the English landscape and skyscape, changes forged by a decade of Prime Minister Harold Wilson‚Äôs ‚Äúwhite heat of technology‚Äù and the heyday of raw concrete architectural Brutalism. The brave new world that Ballard was addressing hasn‚Äôt disappeared today‚Äîvisit the CBD in Beijing if you don‚Äôt believe me‚Äîbut Wheatley‚Äôs film retains the novel‚Äôs original setting, keeping the action in the mid-seventies on the London outskirts. Cronenberg found very real and contemporary Ballardian landscapes in his native Canada‚Äînot only the view of the traffic-choked 401-404 interchange in Crash but also the ‚ÄúStarliner Towers‚Äù on Nun‚Äôs Island near Montreal which feature in his apartment-tower-gone-mad classic Shivers, released the same year that Ballard‚Äôs High-Rise appeared. (Given the unlikelihood that Cronenberg could have read the galleys on Ballard‚Äôs book before scripting and filming his movie, this is less a case of adaptation than of two artists working on closely parallel lines intersecting at almost precisely the same point.) Wheatley, by contrast, decided to ‚Äúbuild‚Äù the glass and concrete Moloch of his dreams with its wasteland of surface parking and its four identical under-construction units, rehabbing an abandoned sports center near Belfast for interiors, while the Milk VFX house, who worked on last year‚Äôs Ex Machina, provided the CGI exteriors. The high-rise they‚Äôve ginned up is a solid gray column rimmed with narrow sun decks that, near the top, takes a decisive diagonal bend, like an index finger with the last joint crooked. If such a thing had even been built and was still standing today, it would almost certainly be a listed building, a star of the recent crop of gallery shows and coffee table books celebrating the legacy of postwar socialist architecture.

Wheatley‚Äôs film begins, as Ballard‚Äôs book famously does, after the high-rise has already become a tribal battleground, with Laing pacifically listening to one of his classical LPs and roasting the leg of a white Alsatian dog on a spit. The cast of combatants is essentially the same, including the architect, Anthony Royal (Jeremy Irons), who presides over convocations of the building‚Äôs elites in a penthouse apartment accessible only by mise-en-abyme elevator where the amenities include a rooftop garden landscaped like the Grand Trianon grounds; Richard Wilder (Luke Evans), a bluff and brawny television producer who decides to make a cinema v√©rit√© documentary as chaos begins to envelop the building and has something of the quality of Oliver Reed in The Curse of the Werewolf (1961), turning more lycanthropic as the film goes on; and Charlotte (Sienna Miller), Laing‚Äôs single-mother upstairs neighbor, with whom he carries on a curt, somewhat formal affair.

Where Ballard divides his narrative between Laing, Wilder, and Royal, Jump‚Äôs screenplay cedes definite priority to Laing. The film draws out character introductions breezed through in Ballard‚Äôs novel and shuffles events about, placing the first traumatic scene and augury of things to come in the building‚Äîthe drowning of an Afghan hound in the 35th floor swimming pool, possibly intentionally‚Äîsignificantly later in the narrative, so as to draw out the delicious anticipation of disaster. Laing is newly arrived in the building as Wheatley‚Äôs film begins with something like an overture that illustrates the normal workday flow of commuter traffic. He gets the lay of the land in a series of social visits and cocktail parties where his neighbors identify themselves and one another in uncannily open-book, cut-and-dry terms: ‚ÄúI‚Äôm a modernist by trade,‚Äù ‚ÄúI‚Äôm an orthodontist, not a homosexual,‚Äù and ‚ÄúInjustice‚Äîmy husband can‚Äôt bear it.‚Äù (Set-dressing accessories fit each resident‚Äôs boxed-in self-definitions, including Royal‚Äôs aristocratic trappings, Wilder‚Äôs apartment with posters for Che Guevara and Morgan‚ÄîA Suitable Case for Treatment, and the local psychiatrist‚Äôs trade paperback of Freud‚Äôs The Psychopathology of Everyday Life.) The idea, perhaps, is to replicate Ballard‚Äôs ID tag way of referring to bit characters in his book by their floor number and profession: ‚ÄúMarket analyst,‚Äù ‚Äúfilm critic,‚Äù ‚Äústatistician‚Äôs over-excited wife,‚Äù or ‚Äúairline hostesses,‚Äù who here make an appearance strolling in file down one of the hallways, accompanied by a skipping, satyr-like Laing.

Where Ballard writes of the ‚Äúhard mantle of personal rivalry‚Äù that lurks just beneath the gossip in the building, threatening to break out into open hostility, Wheatley and Jump locate a more concrete symbol for the horror of unmasking, showing Laing stripping the flesh from a cadaver‚Äôs skull in a single motion while on the job. Soon enough, however, he and everyone else in the tower start finding themselves unable to go out even for work. The decisive break is the swan-dive suicide of one of the building‚Äôs upper-crust, upper-floor tenants, which interrupts a free-for-all-evening of snorting, smoking, and shagging among the mid-level bourgeois. After this first blood sacrifice the breakdown of social order and building services accelerates and skirmishes break out amongst inter-floor raiding parties, soon escalating to the war of all floors against all. Between periodic exterior shots showing mephitic clouds choking the sky that the high-rise scrapes, we are treated to melees in the depleted supermarket and meetings of the gentry in Royal‚Äôs aerie, who respond to immediate peril with heroic acts of hedonism.

The suicide plunge is seen in ravishing slo-mo, the doomed man caught flailing in the open air before finally embraced by the buckling bonnet of a parked car. This is one occasion where Wheatley translates Ballard‚Äôs lapidary text into an actually arresting image. More often, however, he takes to piling scenes of wanton behavior and pell-mell violence atop another, just as the sacks of trash pile up in the lobby of the tower. That his High-Rise, with its cold, autonomous protagonist, doesn‚Äôt work on the level of traditional emotional identification isn‚Äôt necessarily a problem‚ÄîBallard‚Äôs novel doesn‚Äôt really achieve or aim for that either. But what are Wheatley and Jump offering in place of such inducements? While their film suggests an action movie at times, it‚Äôs too ambitious and too wired to settle down and lay out a coherent set-piece; if going that route with a cinematic High-Rise we‚Äôd be better off in the hands of Paul W. S. Anderson, who knows how to smooth out a cinematic blueprint and whose visual imagination has never once been troubled by a single idea, however small. It might be said that, by proceeding from a fairly ordered narrative to a chaotic, scrambling hotchpotch of vignettes, Wheatley and Jump are mirroring the subject matter of Ballard‚Äôs novel in the structure of their movie, but they‚Äôve missed a crucial element of seduction in this progression. While life inside the tower slips from order into brutal spectacle and mob rule, the movie changes gears from measured torpidity to frantic torpidity. At no point does the party that they throw seem particularly alluring, like the shop-‚Äòtil-you-drop-dead wish-fulfillment of George A. Romero‚Äôs Dawn of the Dead (1978), or even particularly frightening, like the HLM Walpurgisnacht in Jean-Claude Brisseau‚Äôs De bruit et de fureur (1988). It just seems very, very strenuously edited.

High-Rise is so logy and arrhythmic that one might assume its creators were hindered by excessive fidelity to their source material. (Not always a problem‚Äî2014‚Äôs Inherent Vice is Paul Thomas Anderson‚Äôs most satisfying film in ages, in no small part because Pynchon‚Äôs template almost got the director out of his own way.) But Wheatley and Jump‚Äôs departures are in fact numerous, and the movie‚Äôs failure is entirely their own. It‚Äôs an invention of the screenplay that Laing is in some way culpable for the inciting suicide, no longer an anonymous jeweler but now a medical student (Augustus Prew) driven to death by a malicious and fallacious diagnosis from the doctor, spurred by petty dislike and symptomatic of the seething professional resentments in the building. Many of the self-satisfied provocations belong uniquely to the film as well, like a television actress‚Äôs imperious mic-drop challenge, ‚ÄúWhich one of you bastards is going to fuck me up the ass?‚Äù And then of course Wheatley deserves full credit for the movie‚Äôs coda, which involves a snippet of a Margaret Thatcher speech leading into The Fall‚Äôs 1979 ‚ÄúIndustrial Estate‚Äù over the closing credits, and which turns Ballard‚Äôs eerie and ambiguous fable of a new phase of human evolution (or de-evolution) being determined by post-human manmade environments into a simpleminded protest film leveled at nasty Tories or something sufficiently-vague-yet-righteous-seeming that everyone can get behind. (In 2014‚Äôs The Kidnapping of Michel Houellebecq, the titular author, who at times has been close to an inheritor of the Ballardian legacy, gets off a few sniping, discursive comments on Le Corbusier that are more incisive than anything here.)

An across-the-board failure of this level is almost destined to be recouped by some enterprising future critic as an underappreciated film maudit‚Äîjust look how we‚Äôve come around on Brutalism‚Äîbut the sum total of High-Rise‚Äôs accomplishment is managing to make violent revolution soporific. Turning dysfunctional utopian architecture into the lone province of right-wingers is probably Wheatley‚Äôs most significant imaginative leap in adapting Ballard, whose novel will thankfully endure beyond this coarsening‚Äîeven if, for a while, it may be hard to find a copy without Tom Hiddleston on the cover.