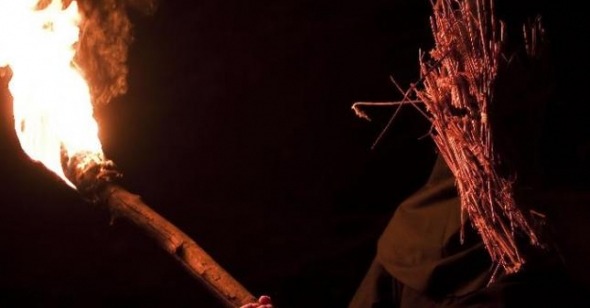 Into the Woods
by Michael Koresky

Some horror movies send you off into the dark night giddy with fear and pleasantly reeling from revulsion. Others give you a glimpse of something so dark and bleak that you‚Äôre left with a queasiness in the pit of your stomach. What you witnessed was not in any traditional sense enjoyable (outside of the momentary thrills one can get from the exhilaration of shock), yet you‚Äôre moved. It managed to burrow to a place not only grim but to which you hadn‚Äôt really considered going before. Films like this are so rare‚ÄĒPsycho, The Wicker Man, Sal√≤, The Blair Witch Project‚ÄĒthat they tend to be later seen as genre benchmarks. Who knows if Ben Wheatley‚Äôs phenomenally upsetting Kill List will ultimately follow in their forbidding footsteps, but it certainly has the potential.

As had been noted regarding his previous feature, Down Terrace, Wheatley kills at subverting genre expectations. In this new film he‚Äôs adding an occult horror element to two tried-and-true Brit formulas, the hit-man film (already a bit of an amalgam with its thriller and character-study qualities) and the kitchen-sink drama. Though it starts off in a domestic realm, Kill List is immediately jarring, as the wicked slash-and-burn fights of a seemingly average middle-class couple‚ÄĒJay (Neil Maskell) and Shel (MyAnna Buring)‚ÄĒradiate an alarmingly sadistic vibe that goes well beyond any normal married sparring. And Wheatley and cinematographer Laurie Rose keep the camera too close for comfort‚ÄĒbut at enough of a distance that it doesn‚Äôt feel like your nose is being pressed into the muck; there‚Äôs still an eerie omniscience to these scenes that puts the viewer immediately on the defensive. A threat hangs in the air that seems to exist outside of the already volatile characters‚ÄĒfor much of the film one wonders exactly where that threat is coming from.

Clearly it could come directly from Jay himself, whom we eventually discover is a contract killer by trade. This is revealed only gradually, shedding disturbing new light on the quarrels over money and career he had been having with Shel in the opening scenes (the tenor of their argument notwithstanding, he might as well have been defending his work as an insurance salesman for all we knew). In fact much of what we learn about Jay comes in bits and bobs, and much of it unresolved and lacking overt psychologizing: we know he is a veteran of the Iraq War, and that eight months ago, something happened during a job in Kiev. Needless to say, audience identification with this killer is severely complicated, as he comes to seem alternately a loose cannon and a cool, calculated criminal. Either way, he loves his wife‚ÄĒdespite his intense, borderline mutually abusive fights with her‚ÄĒand his young son. So when he and his partner and best friend, Gal (Michael Smiley), get involved in some seriously shady dealings with a fearsome new client, we do, in a sense, care what happens. Yet the deeper and darker the plot gets‚ÄĒand the further it veers into shudder-inducing horror territory‚ÄĒthe less are we concerned with Jay‚Äôs safety than our own. Wheatley‚Äôs world is an unpredictable and dangerous place, and we don‚Äôt feel protected: a late-film change in terrain is terrifying not just for the clearly ‚Äúscary‚ÄĚ ingredients in which the director expertly indulges (pitch-black woods, hideously masked strangers, bizarre ritualistic behavior) but also because it‚Äôs unclear how they will be deployed, and what it‚Äôs all leading up to.

The answer is both maddeningly vague and gut-wrenchingly clear‚ÄĒthe closing moments in the film are somehow able to grant the film that finishing-touch ‚Äúaha!‚ÄĚ while also leaving so many troubling questions. This is because Wheatley is working, brilliantly, in two registers, enveloping us in the authentic behavior of vivid characters and then unleashing them in an unsettling land of metaphor. This is highlighted in the way each of the targets on their kill list, announced with large-font title cards, stands in for some echelon of British society (‚ÄúThe Priest,‚ÄĚ ‚ÄúThe Librarian,‚ÄĚ ‚ÄúThe MP‚ÄĚ‚ÄĒshades of Pasolini‚Äôs Sal√≤, whose villainous libertines‚ÄĒknown only as Duke, Bishop, Magistrate, and President‚ÄĒare destructive social forces rather than actual characters). They seem to be working their way up the list‚ÄĒbut in reality they‚Äôre working their way down, in Jay‚Äôs case all the way back to where he started. By the time Jay and Gal are running for their lives through a stygian tunnel on the outskirts of a gated rural mansion, we seem to have left reality all together.

This doesn‚Äôt stop the appalling conclusion from hitting home‚ÄĒhard. As with all great horror movies, there‚Äôs something inexplicable that occurs yet has real-world ramifications. Kill List is ultimately a wrenching cry of despair for a world in which kindly gestures seem long forgotten‚ÄĒthe film has plenty of polite ‚Äúthank you‚Äôs‚ÄĚ and it ends with a smile you‚Äôre unlikely to shake. But these are merely the signals of a world made upside-down‚ÄĒby war, by economic struggle, maybe by the devil himself.