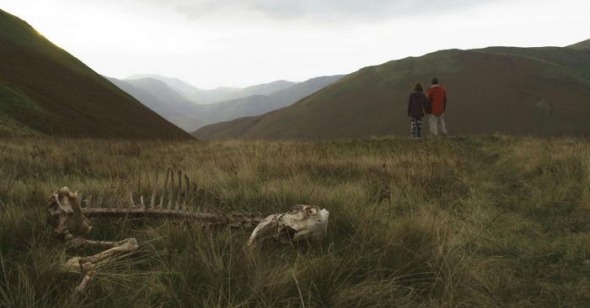 It can be stated without fear of too much controversy that the English countryside—the best elements of which, in terms of sheer natural beauty, have little to envy the glorious rural landscapes of France and Italy—is without a doubt the very worst place in the developed world to go on vacation. It’s a bizarre cultural mystery that unites the striking, cloud-punched skies and dewy twilight-lit hillsides immortalized by Constable and Turner with the hell of clotted cream teas, nightmarish hostelries in the nature of An American Werewolf in London’s Slaughtered Lamb pub, moribund caravan sites (communal toilet motto: “If it’s yellow, let it mellow, if it’s brown, flush it down”), and above all, brown “heritage” road signs which, in the words of comedian Arthur Smith, are “all directing you towards something shit.” This quintessentially English paradox is effortlessly harnessed in Sightseers, Ben Wheatley’s scabrous situation comedy of serial homicide in the shires.

Devotees of his previous two genre-bending offerings—Down Terrace and Kill List—will recognize that Ben Wheatley is, on the whole, a filmmaker to be approached with caution. Most of us enjoy being taken for a ride when we go to the movies, but there were aspects of Wheatley’s last ride in particular, Kill List, where you began to feel that the thrill you were experiencing wasn’t quite in the nature of what you had signed up for. The loosening of the bond of trust between audience and director—like spotting, mid-descent, an unscrewed fixing rattling away on a hinge of your coaster car—made Kill List all the more thrilling for some and all the more disturbing for others. Sharing some of Tarantino’s tendency to heighten the threat by postponing it, Wheatley also created in Kill List an audience experience akin to being asked to imagine the unimaginable. The ingenious screenwriting and restrained mise-en-scène Wheatley deployed to create this potent effect helped garner the film an enthusiastic critical reaction, particularly in North America, where Wheatley's debut, Down Terrace, had made less of an impact. The subsequent torpedoing and deflating of his own approach by a clumsily familiar ending—horrifying and cruel perhaps, but oddly neat and hardly unimaginable if you’ve seen The Wicker Man and Once Upon a Time in the West, not to mention Hot Fuzz—mitigated the British audience response to Kill List, after the surge of anticipation which the stylistically fresher, tighter Down Terrace had fueled over here.

With Sightseers—billed in Cannes last year as a “comédie horrifique,” the literal translation of which, “horrific comedy” is just about perfect—Wheatley reacquaints himself with his roots in television humor and presents us with something more straightforward than before (there is no doubt you are watching a comedy from start to finish) but which still allows him room to indulge his predilections for unpredictability and all-out gore. Shot, like Kill List, on a microbudget in natural locations and using the same supporting cast, it’s the story of Chris and Tina (characters created and played by Steve Oram and Alice Lowe, who also wrote the screenplay), thirty-something lovers with dysfunctional individual lives who plan a grand caravan tour of some of middle England’s more hilariously quaint locations—the Crich Tramway Village, the Blue John Cavern, the Keswick Pencil Museum—until Chris accidentally runs over a pedestrian who, serendipitously, had infuriated him earlier that day by dropping litter. This grisly episode has a galvanizing effect on their relationship, and events and passions conspire to drive them both to carry on killing.

It’s partly to Wheatley’s discredit that the inevitable “Badlands directed by Mike Leigh” comments impose themselves so readily, and are arguably due to more than just lazy criticism. Wheatley is, stylistically speaking, something of a magpie, appropriating recognizable tropes not because he places himself in a particular school of filmmaking, but because he uses audience identification of genre and style to build tension (Kill List), laughs (Sightseers), or both (Down Terrace), and does so with great skill. His films have received such relativist observations before (references to Ken Loach and Alan Clarke pepper reviews of Down Terrace and Kill List). The story of Sightseers isn’t just tangentially similar to Badlands but is in many respects manifestly based on it, almost to the point of parody. Tina’s dead-end existence (she has a sentimentally corrosive mother) and her child-like and emotionally stunted reactions to the emergence of Chris’s homicidal tendencies come straight from the template of Sissy Spacek’s Holly.

On the other hand, if Leigh’s Nuts in May is an influence, it is more for the character-driven nature of the comedy than the references to camping. Indeed, Oram and Lowe (both of whom had walk on parts in Kill List), have workshopped the characters of Chris and Tina for many years, announcing themselves here as a broader, edgier Jean-Pierre Bacri/Agnès Jaoui duo. The platform for their humor is reductive juxtaposition—allying high sentiment or grandeur with the familiar or mundane —a technique which infuses the poetry of T. S. Eliot (“And time yet for a hundred indecisions/And for a hundred visions and revisions/Before the taking of a toast and tea”) and was popularized in Britain by the Northern comic playwright Alan Bennett (The History Boys), whose famous monologues are jammed full of silly profundity: “Life is rather like a tin of sardines—we're all of us looking for the key.” Bennett, with his unique verbal delivery (think Elmer Fudd from Leeds), understood more than anyone the intrinsic comic power of a meaty regional accent delivering grandiloquence in the same sentence as quotidian platitudes or references to familiar English household products. Oram and Lowe’s characters are from the Midlands and the opening five minutes of Sightseers is a veritable orchestral overture of ‘Brum’ accents: Tina’s mum calls her bedroom her “inner sanctum” (“no one’s going in ya sanctum, mum” says Tina) while the screenplay juxtaposes references to Senokot laxatives and hand-knitted crotchless underwear with the visual magnificence of the 12th Century Cistercian abbey at Fountains in North Yorkshire. Much like its closest aesthetic stable-mate, Michael Winterbottom’s The Trip, some of the specifically English references will regrettably be lost on U.S. audiences.

As the story progresses, Chris—having succumbed to his psychosis on a night when a group of shamans from Portsmouth are sacrificing the campsite owner’s chickens by the bonfire (a deft nod to Kill List)—struggles thereafter to re-attach himself to the normal world by attempting to befriend other sightseers along the way. Tina, on the other hand gradually realizes (in particular via one standout belly-laugh inducing sequence involving a stolen camera) what is happening and panics like a cornered cat before turning in on herself and her relationship.

Oram and Lowe have opted to use the grammar of a sitcom, gambling that the central relationship alone is sufficient to carry the film, rather than seeking to dramatize everything around them (such as the inevitable manhunt that would have ensued). The consistency and depth of the characterizations is what amortizes that decision, and moreover stops Sightseers from turning into a one-joke film. Tina has a habit of repeating herself a fraction too quickly and too often when needing someone’s attention (“Mum? Mum? Mum?”; “Chris? Chris? Chris? Chris? Chris?” “WHAT?”), while Chris’s murderous instincts stem from a farcical judgmentalism (“Janice looked frigid as well”; “that dog’s a pervert”; “you’re a witch, you are…”) colored with hypocrisy (stoving a man’s head in for complaining about the very offense—defacement of the countryside—Chris himself supposedly deplores). These qualities are worth pointing out, because Sightseers has no hidden depths. There is surprisingly little in the way of actual satire (this isn’t, thankfully, Bobcat Goldthwait’s God Bless America), and no one’s buying that Chris isn’t just a comical psychopath looking for easy excuses to kill people (e.g.: it reduces carbon emissions). But consider the deaths themselves—the first is accidental; the second kept secret from Tina; she is an accomplice to the third and she carries out the fourth and fifth herself. They form a narrative and a plausibly structured evolution of Tina’s character that keeps us implicated. Wheatley, who delights in the visceral responses his directorial flourishes can provoke (the sudden appearance on the soundtrack of John Hurt reading Blake’s Jerusalem at one stage is gasp-inducing) and who favors stimulus delivery over being taken seriously as an auteur, is working in counterpoint with his writers here to pleasing effect.

That isn’t to say that there is no thematic consistency to Wheatley’s films, just that the most common theme to all three is inextricable from his impish directorial approach: namely, the sense of suffocation of his protagonists, and his capricious treatment of their doom-laden attempts to escape it. In Down Terrace the suffocation came from Karl’s family, in Kill List it was the criminal underworld which Iraq veterans Jay and Gal had bought into, and in Sightseers it’s home life (Tina) and modern life (Chris). Chris has been made redundant from his job and subjected to “low-level bullying”, but rather than give up, he is searching for nature-induced fulfilment—he wants to write a book about the trip and believes his relationship with Tina will help. (“Am I ya muse?” ventures Tina, “aaah, that’s lovely, I’ve never bin a muse before!”) By co-opting and converting Tina, who is essentially a shy, frightened minor who develops an obsession with having him all to herself, Chris seals his fate. The potential for poignancy here might not have been lost on Wheatley, but one suspects the grinning Rumpelstiltskin of British cinema would still just rather end on a decent kill.