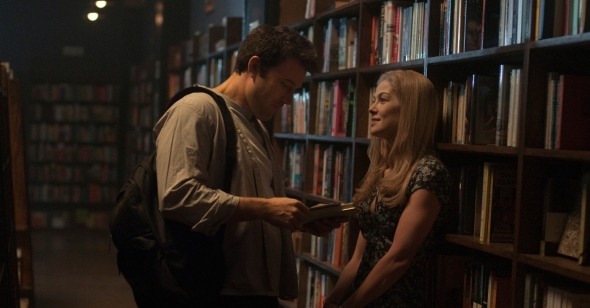 He Dead, She Dead
By Michael Koresky

[Below you will find spoilers aplenty.]

“The one charm of marriage is that it makes a life of deception absolutely necessary for both parties.” —Oscar Wilde, The Picture of Dorian Gray

“Marriage is a wonderful institution, but who wants to live in an institution?” –Groucho Marx

In popular culture, few myths are more reliable than the one about the evils of marriage. Some of our most bromidic wits, as quoted above, are in inherent agreement with Freud, who saw barriers everywhere in regards to romantic bonding: Eros drives us together, Thanatos makes us want to hurt each other. Gillian Flynn takes it even further with her Gone Girl story, using the simplistic premise that two people can never really know each other to launch into a tale that posits matrimony itself as a form of psychotic homicide. David Fincher’s new movie of this best-selling novel sees Flynn’s cynicism and raises it considerably by filming it with his usual trendy iciness, trudging along through 150 minutes of unfussy yet artfully precise compositions only to reach what appears to be its single insight. “All we did was resent each other and cause each other pain,” he says. “That’s marriage,” she says. Instead of a cool-blue filter, put a laugh track on it and it might as well be Married…with Children.

Coming so soon after The Girl with the Dragon Tattoo, Fincher’s Gone Girl seems another attempt to turn tawdry airport fiction into sophisticated popular art. It’s the kind of conveyance auteurists especially like: if Fincher can put his own personal stamp on inherently sleazy material, then this can only prove his genius. This approach allows critics to disregard niggling, insignificant matters like content: plot, character, plausibility, even politics. The jury is out on whether the tonally muddled Gone Girl is poker-faced satire or grave psychological thriller, but whatever register the film is playing in, the themes of the film come across as trite and fundamentally exploitative, appealing to the audience’s worst instincts by trotting out our most negative and facile notions about male-female relations and passing them off as insights. The violence in Gone Girl is not meant to simply be the behavior of the twisted individuals onscreen but implicitly a reflection of some kind of literal and spiritual sadomasochism inherent in marriage, a sick joke that nevertheless is meant to sting with truth. Thus even its unabashed absurdity cannot help mask the core rot of this project, the kind of nasty business that flatters its audience for being complicit in it.

That Gone Girl is profoundly misogynistic shouldn’t come as a surprise, as it’s just another product of a profoundly misogynist culture. And that this tale of a housewife, Amy Dunne, who fakes her own disappearance with the intention of killing herself and framing her husband, Nick, for her “murder” was written by a woman means little considering what we see and hear onscreen. The word “bitch” is thrown around so often it’s almost a dare to the audience to see the film for what it is. Most disturbing is its media satire, only taking aim at cable-news violence-against-women crusaders, which feels at once wildly off-target and fish-in-a-barrel. A Nancy Grace-ful talk-show-host (Missi Pyle) and a screechy, suburban stroller mom (Casey Wilson) who both publicly accuse Nick of killing Amy get the ugliest treatment, broad caricatures of raging, indignant womanhood who exist only for the film to make dubious points about some sort of perceived reactionary feminism in mainstream American society (a point that doesn’t seem particularly enlightened with the recent proliferation of domestic abuse cases in the spotlight). The film may feign a smirk when Nick moans, “I’m so sick of being picked apart by women,” but Gone Girl’s trajectory only serves to justify his anxiety.

Fincher purports to provide dual perspectives—as Flynn did in the book by way of Nick’s first-person address and Amy’s diary entries—but the film is distinctly from the point of view of the callow, abandoned husband, played by a doughy, perennially slack-jawed Ben Affleck. The intimidating, lumbering actor is well cast physically but mostly offers variations on his patented hundred-mile stare while he wonders where his missing wife could have gone. He is instantly suspected of foul play, as anyone who so resembles Scott Peterson ought to be, and for the first third, we’re left to wonder whether Affleck’s blankness is meant to hide dangerous depths or if it’s just the actor’s inability to express conflicting emotions on his face. Nick’s everydude husband is a veritable fount of emotion, however, compared to shark-eyed ice queen Amy, a New York native we first meet in a series of flashbacks showing the couple’s awkward meet-cute and courting and, later, in scenes from their loveless marriage in their suburban Missouri McMansion. Known best for inspiring the children’s book character Amazing Amy, created by her chillingly stoic psychologist parents, Amy perhaps sees herself more as a fictional being than as a real human, which would explain why, as embodied by a committed, rarely blinking Rosamund Pike, Amy seems as machine-tooled as a T-1000.

When the film shifts to Amy’s perspective in the second act, the film gestures toward turning her into a juicy femme fatale à la Gene Tierney from John Stahl’s Leave Her to Heaven—a nasty Technicolor noir in which a gorgeous and gingham-dressed, if more-than-slightly sociopathic housewife kills herself and frames her husband for it. But rather than digging into her psychology, the film only further obscures her from the audience, in an attempt to make her as frighteningly other as she is to Nick. Why bother trying to understand her when “everyone knows complicated is short for bitch”? These words of wisdom come via Nick’s sassy twin sister (Carrie Coon), a character who seems planted to safely say all the things Nick cannot for fear of making him less sympathetic.

Flynn “identifies herself as feminist,” according to a 2013 Guardian interview, but the work speaks for itself. In that same article she claims, “I don’t write psycho bitches. The psycho bitch is just crazy—she has no motive, and so she’s a dismissible person because of her psycho-bitchiness.” If this is the case, then Fincher—with a little help from screenwriter, Gillian Flynn—has betrayed her source material, making the umpteenth noir-tinged variation on the unknowable woman. In a line taken from Flynn’s opening page, Nick says in voiceover he wants to crack open Amy’s skull and sift through her brains; this is set against an opening image of the back of her blonde head, caught in Vertigo-echoing close-up. Flynn and Fincher’s point here seems to be that this lovely head conceals not the makings of a “psycho bitch,” but the deep, dark mysteries of marriage—never mind that this is the kind of woman who, at one point, takes a hammer to her own face in order to fake domestic abuse and who once knowingly wrongfully accused an ex-boyfriend of rape, ruining his professional life forever.

Amidst all this, yes, the exquisite digital photography by Fincher’s DP Jeff Cronenweth is fearsomely calibrated; it’s clear from the opening shot that not a hair will be out of place, even as the film’s plot grows increasingly insane. As Fincher has proven in such velvety nightmares as The Game, Zodiac, and Dragon Tattoo, his stygian nighttime imagery is remarkable, especially when those diabolical TV news vans surround the Dunnes’ home, their headlights cutting through the darkness like glimmering swords. And we have another insistent score by Trent Reznor and Atticus Ross, heavily laid over even the lightest of dialogue scenes to seemingly provide some ironic counterpoint, lest we forget this is a detached study of humans rather than a plunge into the deep end.

But dare I say that these are superficial matters? By the time the film reaches its blood-drenched, Grand Guignol climax, featuring Neil Patrick Harris as an aesthete missing only an ascot and mustache, the film’s dour, self-serious mise-en-scène has long seemed more mannerism than apt visual choice. Fincher’s studied, airless brand of pulp registers as willfully inhuman. Just as Affleck and Pike are not just performing their roles, but coldly performing characters performing players in a marriage, Fincher is merely playing the part of the genre director, purporting to keep a sophisticated distance from the material. Gone Girl’s take on modern romance leaves little room for its viewers to do anything but scowl and snicker. It’s stiflingly misanthropic. Ultimately it’s not that I think so little of this movie; it’s that it thinks so little of me.