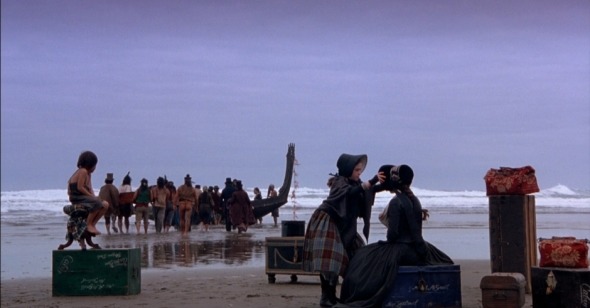 Into the Deep
Beatrice Loayza on The Piano

The Piano screened Saturday, June 26 at 1:00 p.m. on an archival 35mm print as part of Museum of the Moving Image's See It Big: The Return! series.

Reflecting on Jane Campion’s, The Piano, the mind inevitably wanders to the shore. A mother and child, like nesting dolls in their similitude, wait at the edge of the ocean, all bundled up in their bonnets and hoop skirts as the sands—so vacant and smooth—coalesce with rushing waters that stretch out to infinity. These are not castaways, but spirits in purgatory, their earthly possessions scattered around them like unwieldy memories of a past life. It is by mining the fantasy lives, the dreams and desires, of these preternaturally entwined women that Campion empowers them, makes them flesh and bone.

Sold into marriage with an English settler living in the New Zealand bush, Ada McGrath (Holly Hunter) arrives by rowboat and is plopped on the beach like a piece of cargo along with her daughter, Flora (Anna Paquin), a pipsqueak articulate beyond her years. It is out of practical, habituated convenience that Flora will occasionally talk for her mute mother, as she does here, railing against their manhandling escorts. The confidence and authority to be gained from speaking on behalf of an adult accounts, perhaps, for the girl’s amusingly outsized personality. Thus, we see this “new world” not through the eyes of a priggish, domineering colonizer, but through those of a starry-eyed youngster brimming with imagination.

Yet the film, abound as it is in riveting images seemingly plucked out of the subconscious, also deals in stark, palpable emotion, the kind that induces uncontrollable physical reactions. Midway through, a group of indigenous men, tricked by the illusion of a shadow puppet simulating the murder of a damsel in a Bluebeard play, jump to the rescue and spoil the show, which parallels the myth of the Lumière brothers’ The Arrival of a Train at La Ciotat, which supposedly caused audiences to panic and run from their seats upon seeing the image of a train barreling toward them. This questionable, racially insensitive scene nevertheless illuminates Campion’s vision, anchoring her work in the spectacular and affective tradition of cinema and its connection to the history of magic and illusion. Campion, I imagine, is very much aware of the association of magic with the naïveté of children; in fact she encourages this total fantasy immersion. What I would do to feel The Piano the way I first did when I was a much younger woman, free of my intellectual armor and completely surrendered to the intrigue, the staggering beauty of Campion’s images, weeping and swooning as if everything were directly happening to me. Campion tells us: it’s only a dream, but do not resist being swept up in it.

In conversation with a local woman, Flora recounts the origins of her mother’s muteness as if spinning a tall tale or relating one of her mother’s bedtime stories: a “great bolt of lightning” killed her father, a grand German composer, while the shock of witnessing such a scene left Ada permanently speechless. Ada admonishes her daughter with a steely glare for her blabbermouth ways, yet her silence preserves a critical ambiguity: is Flora inventing their history or divulging Ada’s most intimate secrets? In Campion’s calculus, both are possible: The Piano is a fantastic story that reveals private truths, an erotic confession delivered in the form of a myth.

It’s a convention of period dramas and literary classics alike to mine the unhappy circumstances of women forcibly married to men they do not love, yet the union of Ada and Sam Neill’s uppity, pitiably awkward Alisdair Stewart has always struck me as distinctly, if not ostentatiously, tragic—though Stewart does, eventually, stoop to the kind of violence exhibited only by the most villainous husbands. Alisdair “doesn’t mind” that Ada is mute, which is less a gesture of romantic devotion than a particularly cruel form of indifference. It’s one thing to fall in love with a mute woman, and another to welcome her silence, to take for granted that she has nothing to say. And yet, in Ada’s opening voiceover address, she brushes off our sympathies: “I don’t think of myself as silent.”

Waiting for her betrothed to arrive at the beach, Ada reaches one hand into the small opening of a wooden crate that holds her treasured piano. Her fingers land on the keys and play a tune that pierces the calm: this is her expression, her movement, her release. And so, when Stewart turns up and refuses to haul the cumbersome instrument back home, he immediately, unwittingly, deprives her of her most cherished possession, a musical extension of her own body. It’s mine, mine, she scribbles on a piece of paper when Stewart announces that he’s sold the piano to neighbor George Baines (Harvey Keitel). An “illiterate oaf” with Maori etchings on his forehead and the bridge of his nose, Baines trades a coveted stretch of land for the piano and the opportunity to hear Ada perform under the guise of wanting lessons.

The men’s differing understandings of the piano and Ada’s connection to it express a crucial dichotomy. The more gentlemanly Stewart worries that his new spouse suffers from a mental disorder when he sees her pretend to play a makeshift piano using the kitchen table. Baines, a man of gut feeling and rugged physicality (which Campion reductively connects to his familiarity with the indigenous Maori community), immediately perceives how the piano unleashes something vigorous and arousing in Ada, how it renders her muteness beside the point. “She does not play the piano like we do,” observes a tittle-tattling neighbor. “She’s a strange creature, and her playing is strange.” For Campion, those on the margins—women, children, indigenous people—are voiceless and enigmatic to the white men that dictate their lives, in part because these men simply lack the imagination; so persistently insular are their perspectives. Such hierarchy-preserving narrow-mindedness only heightens Stewart’s awkwardness; despite his mannered ways, he comes off as more of an idiot than his uneducated counterpart.

Ada and Baines come to an agreement: one “piano lesson” in his home for every black key. When the keys run out, Baines promises to surrender the piano. The arrangement swiftly devolves into a form of prostitution that matches Ada’s relationship to Stewart, who expects intimacy from his purchased bride. Baines first demands a view of Ada’s undulating bare shoulders, throws himself on the floor to take in the percussive pleasures of her pedaling feet, then tenderly presses a finger against a patch of skin exposed through a hole in her stocking. These moments are just as quiveringly sensual as the adulterous couple’s eventual naked caresses and feverishly passionate embraces upon the confession of love. In one scene, a bare-assed Baines gingerly and adoringly wipes down Ada’s piano, as if to say darling, you fuck me so well.

Campion intercuts these sex scenes with those of Flora frolicking in the woods and climbing trees. Mother and daughter each undergo a physical awakening, but Flora—reprimanded by Stewart when she’s caught kissing and rubbing herself against a tree—does not understand what she’s feeling, what she’s seeing when she witnesses Baines and her mother making love through a peephole.

Thanks to a neglected Flora, Stewart, too, catches the lovers in the act, though he voyeuristically watches through cracks in the floorboard rather than interrupt the mesmerizing scene. He realizes Ada is a sexual being and attempts to channel that desire toward him when he forbids her from seeing Baines and puts her on house arrest. His efforts are of no use: Ada sends a love letter to Baines carved into the side of a piano key; for the illiterate Baines, the object itself, a symbol of their passion, carries more significance than mere words. Yet it is these words—Dear George, You Have My Heart. Ada McGrath—that incriminate her when Flora delivers the totem to Stewart instead, who flies into a jealous rage and uses an axe to chop off a single finger from the hand of his deceitful wife, a contemptuous act of castration.

Here, Campion upends our expectations by both refusing to sink deeper into tragedy and decentering Baines and Ada’s relationship. Guilty and having accepted the ruined state of his marriage, Stewart relinquishes Ada to his rival. And so we return to the beach, to the rowboat that shoots toward the blank horizon and into a new land, a new era—one we glimpse when we see Ada equipped with a metal finger lovingly fashioned by her new husband.

Before this, however, Campion summons one of her most evocative images when our heroine jettisons her piano off the wobbling rowboat in an act of symbolic renewal. A rope attached to the instrument unravels around her feet and in a baffling act of morbid curiosity, she intentionally steps into a loop that tightens around her leg and plunges her into the sea’s depths with the force of an anchor. For a moment, Ada resigns herself to her fate: “What a death! What a chance! What a surprise!” she says in voiceover, as if tickled by the sheer drama of her story, as far-fetched and legendary as the bolt of lightning that supposedly turned her mute. Her “will chooses life” and she fights her way back to the surface, effectuating her quaint, ordinary existence as a local piano teacher in a loving marriage, a different kind of fantasy that leads us to question the reality of Ada’s version of events.

Yet finally, Campion leaves us with the otherworldly, unsettling image of Ada floating above her piano in a watery grave—not a happy image, but an extraordinary one, a testament to her profound romantic spirit. “At night I think of my piano,” she confesses. “Down there everything is so still and silent that it lulls me to sleep. It is a weird lullaby and so it is; it is mine.” We must recognize this audacity, and the rarity with which artworks of such complexity and possibility receive the canonical status and such widespread acclaim that The Piano did when it won the Palme d’Or and went on to win three Oscars—for Hunter, Paquin, and Campion, as screenwriter. The power of The Piano is not that its women seem to emerge triumphant, not that Ada finds true love nor that she escapes from a loveless arrangement; it is that her inner life—its contradictions, ambiguities, and flights of fancy preserved, even materialized through Campion’s unresolved narrative and illusionist tendencies—remains at its center.