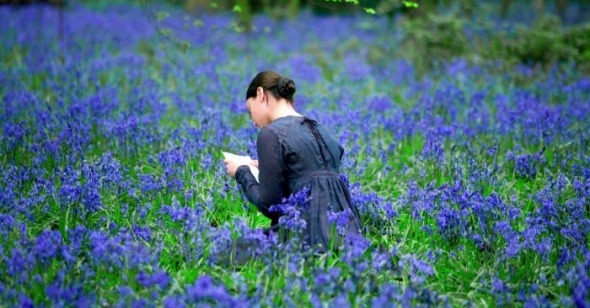 Her Own Verse Enemy
By Andrew Chan

Some love affairs are looked upon as works of art in themselves. Perhaps they possess a mysterious golden ratio of joy and pain that encapsulates a culture‚Äôs most fundamental notions about romantic attachment. As with our relationship to art, our appreciation of these mythic pairings can help us reconcile the messy materials of life with our ideals and allow us to maintain the belief that, if we love with sufficient fierceness and dedication, we can confer immortality on the things we hold dear. What the great Romantic poet John Keats shared with his neighbor, Fanny Brawne, during the early nineteenth century holds a prominent place in this lovers‚Äô hall of fame, and part of the enduring appeal of their story lies in the contrast between Keats‚Äôs taste for beauty and perfection and the darker truths of class, illness, jealousy, and grief. As the poet‚Äôs star has steadily risen over the past century, the image of his one great love has only served to solidify his reputation as a man of unsurpassed sensitivity, a myth born as much out of his haunting (and now widely read) love letters as from his verse.

Fanny Brawne‚Äôs perspective on the relationship is considerably less well documented, and the challenge of inventing a plausible sensibility for her is confronted in Jane Campion‚Äôs Bright Star, which takes this young woman‚Äôs experience of first love as its center. The film starts with a tribute to woman‚Äôs work‚Äîan extreme close-up of a needle piercing through cloth‚Äîas though setting us up for a demure homebody heroine. But the first several scenes move along at the sprightly pace of a smart battle-of-the-sexes comedy. When we first meet Fanny (Abbie Cornish), she is verbally sparring with Keats‚Äôs best friend, poet and male chauvinist Charles Armitage Brown (Paul Schneider), and matching him barb for barb. The ease with which Campion depicts women‚Äôs power and agency during repressive times is a rarity in movies, and it exposes just how condescending period films often are to even their strongest heroines. Thanks to her gift for locating depths of expressiveness in actresses, Campion has found in Abbie Cornish‚Äôs Fanny perhaps the most self-assured figure in her entire oeuvre. She seems so comfortable in her own skin, so complete and fulfilled even before her lover makes his first appearance, that it‚Äôs a pity we gradually lose her wit and sharp humor as the film succumbs to Keats‚Äôs sincerity and ponderousness. Cornish is able to signal complexity through confidence, and she serves as the film‚Äôs embodiment of Keats‚Äôs ‚Äúnegative capability,‚Äù that state in which a person can reside in mystery and doubt ‚Äúwithout any irritable reaching after fact and reason.‚Äù

Against such a life force the thin, pale, and tubercular poet (played by charisma-challenged Ben Whishaw) doesn‚Äôt stand much of a chance. For some, this will be Bright Star‚Äôs most significant disappointment‚Äîthere will inevitably be viewers left yearning for a more authoritative and hot-blooded tribute to Keats, a much-loved subject who seems to have always cried out for a passionate cinematic interpretation. In celebrating his art, the film begs questions it never really seeks to answer, such as: What experiences prepare or predispose a man to write something immortal? And what is it that carries a poet from the imperfect craft found in a poem like Endymion (which Brawne takes the liberty of criticizing upon the couple‚Äôs second encounter) to the late-career outpouring of exquisite verse from which the film liberally quotes? Bright Star leaves out the depths of feeling and experience we find in the director‚Äôs earlier exploration of a writer, An Angel at My Table, and denies Keats much of the inner life from which his poems sprang and to which Brawne must have been attracted. We also never ascertain what it is Campion believes to be the factor that allows Keats‚Äôs work to last, or that makes any artist deserving of his mythic status.

For a film that tries so mightily to appear intoxicated by art‚Äôs capacity for beholding and creating beauty, Bright Star just isn‚Äôt inquisitive enough about how such beauty takes shape in the gap between reader and writer. Campion hasn‚Äôt found a solution for the difficulties that many films about artists face: that tendency to keep the creative process in its own private universe, largely hidden from the audience‚Äôs view, and to settle for biographical explanations in describing how the artist‚Äôs work intersects with his life. Bright Star assumes that Keats‚Äôs poems are self-evidently sublime, even as it makes sure to note that such critical reception has proven to be relative to the fashions of the historical moment. A void emerges between the film‚Äôs desire to communicate the splendor of Keats‚Äôs masterpieces and its reluctance to fathom either the genius or the toil that produced them‚Äîas if the former would get in the way of a humanizing, essentially earthbound love story, or the latter would refute Keats‚Äôs theory that poetry should come ‚Äúas naturally as leaves to a tree.‚Äù

If only Bright Star‚Äôs Keats seemed as possessed by his words as The Piano‚Äôs Ada was by her music. Campion has quite admirably made sure to offer the audience many opportunities to experience Keats‚Äôs poems read aloud, but the actors‚Äô whispery recitations feel too calculated in their placement, and we are never given enough space to luxuriate in them. Campion employs these greatest hits as if they were pop songs on the soundtrack, but in the end it‚Äôs as though she‚Äôs taken their existence for granted. One begins to suspect that the film is worshipping blindly at the altar of great art, when it might have been a more nuanced and thoughtful case of one artist trying to see through the eyes of another. Bright Star lacks that sense of personal exploration that can be found even in a potentially stuffy literary adaptation like Campion‚Äôs own The Portrait of a Lady. Worst of all, there are times when it feels as if any intelligent director could have made it, which amounts to quite a disappointment from an auteur who has woven a remarkable career out of her ever-evolving passions and idiosyncrasies.

Still, it isn‚Äôt quite true, as some detractors have claimed, that the film is merely a dressed-up Masterpiece Theater production. Within its seemingly conventional framework, Bright Star does manage its own modest forms of adventurousness, particularly when it unleashes the sort of sensory pleasures that Campion at her best can provide. Straddling a line between period clich√© and the genuine sublime, the film locates its emotional core in images that find love echoing across nature. In one sequence, butterflies provide an obvious symbol for the rise and fall of young romance. In another, far more evocative example of how love sensitizes and overwhelms the body, Fanny stumbles through a field of purple flowers while reading one of Keats‚Äôs letters, as if she were Dorothy in The Wizard of Oz getting high off the scent of poppies. Cinematographer Greig Fraser gives us compositions so delicately wrought that we sometimes expect the screen to dissolve into a sea of pointillist particles. Perhaps in response to such splendors, some have framed Bright Star as her comeback. To these eyes, it seems that she has sacrificed the exhilarating rush of ideas in her edgier, more openly feminist work, and adopted a restraint that many might see as artistic maturity.

Campion has ably fetishized repressed lust, but she misses out on fully dramatizing the thrill of sublimation. Words that should be freighted with lovers‚Äô passion are themselves too tightly corseted by their sound-bite presentation. What happened to Campion the eternally restless artist, whose last feature (2003‚Äôs unfairly maligned In the Cut) was so jittery with its anxieties about female desire that it seemed to crackle and pop off the screen? Where is the Campion who used to masterfully navigate the intricacies of mood, and who, in An Angel at My Table, created a sense of the stillness and psychological privacy required for the writing life? This most beloved of female auteurs makes an effort in Bright Star to achieve that same overlap of the literary and the cinematic, substituting visual sumptuousness for linguistic ecstasies, and a muted atmosphere for Keats‚Äôs formal constraints. But if the glories in the poet‚Äôs best work were kept in line by strict meter and rhyme, they were also full and abundant, constantly at risk of overflowing. In Bright Star, one of the greatest loves of all appears overly content in being contained.